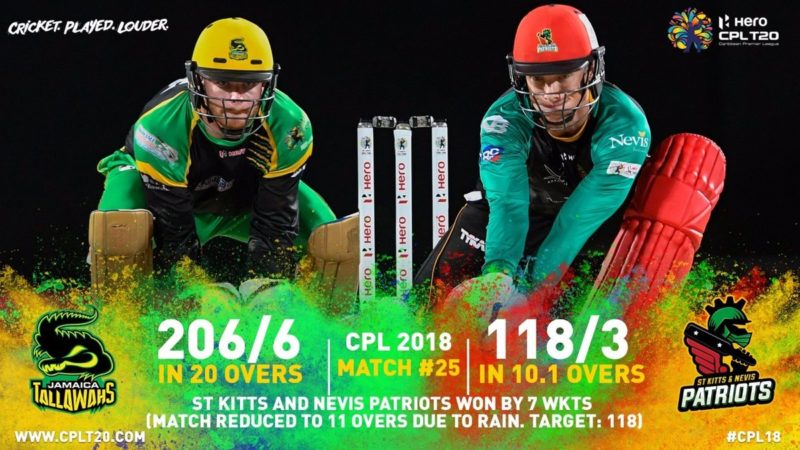 Patriots chased down the revised target of 118 (in 11 overs) with five balls to spare. With this victory, Patriots also sealed their spot for the playoffs.

After Oshane Thomas dismissed Evin Lewis for no score, Chris Gayle (41) and van der Dussen played a flurry of shots to not just help the hosts recover but also keep them in the game. At 65 for 1 in the seventh over, heavens opened up to halt play. After a gap of 30 minutes, when play resumed, Patriots needed 53 off 27 balls as per the DLS Method.

Gayle, however, was dismissed by Krishmar Santokie to give Tallawahs a window of opportunity to stay in the game. At that crucial juncture, van der Dussen and Mahmudullah smacked Thomas to all corners of the ground to collect 27 runs in a single over. The highlight of the stunning assault was van der Dussen tonking Thomas into the nearby car park. The duo then played with a sense of calmness to guide the side home.

Patriots have nine points from nine matches and will play their final game of the league phase against Barbados Tridents on September 4. Meanwhile, Tallawahs, who have already progressed to the playoffs, will take on Amazon Warriors on September 5.