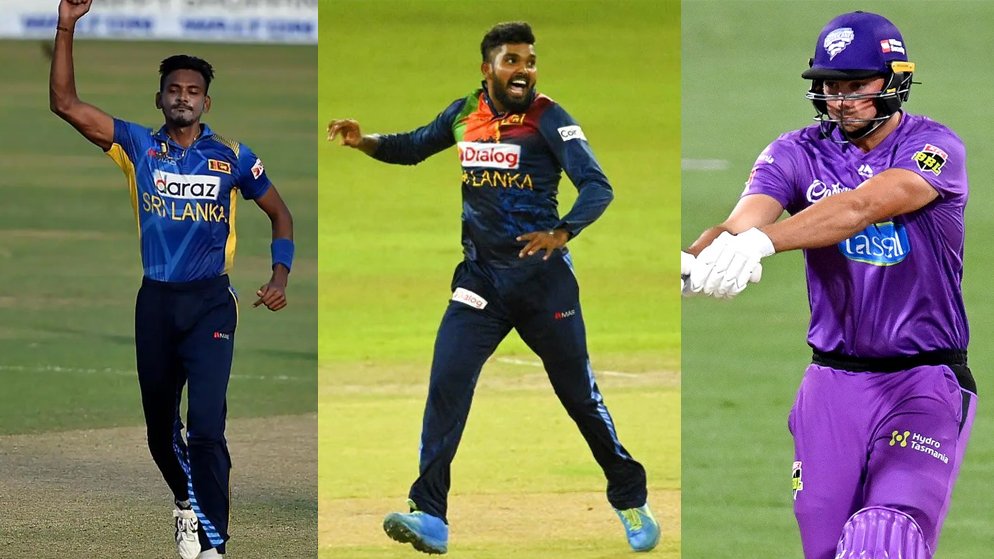 Changes are being made to the different teams participating in the Indian Premier League. The Royal Challengers Bangalore have signed Sri Lankan fast bowler Dushantha Chameera, Sri Lankan spinner Wanindu Hasaranga and Singaporean allrounder Tim David into their squad.

The fourteenth edition of the Indian Premier League was being held in India this time but was stopped midway owing to the rapid spread of the pandemic across the country. Doubts were cast about the future of this edition of the tournament; but soon the management announced their plans of holding the second phase in the United Arab Emirates, which is scheduled to start on the 19th of September with a face-off between Mumbai Indians and Chennai Super Kings. Let us have a close look at the details of the announcement.

All three players have been drafted into the squad as replacements of other foreign players. Australian players Kane Richardson and Adam Zampa had made themselves unavailable in the course of the first season itself and had flown back to Australia due to personal reasons. The New Zealand duo of Fin Allen and Scott Kuggeleijn have chosen to tour with the national team. Another Australian fast bowler, Daniel Sams, has also backed out. All the players who have been selected for this campaign have good records in T20 cricket.

While Tim David has not played international cricket, he has made a name for himself while representing different franchises across the world in T20 cricket. This will be his debut match. Sri Lankan legspinner Wanindu Hasaranga put up a splendid performance in the recent T20I series against India and was awarded the Man of the Series. He was brilliant in every match and is currently the no. 2 ranked bowler in the ICC T20I player rankings.

He picked up a total of seven wickets in the series and his four-wicket haul in the final game proved to be very crucial for the win. He returned figures of 4/9 in the final game. His brilliance in the ODI format has also been proven; as he had figures of 3/37 in the 2nd ODI against India. Sri Lanka won the series 2-1 against India. Dushmantha Chameera, too, has been known for his fast bowling skills among Sri Lankan bowlers.

The changes have been backed by Mike Hesson, who is the Director of Operations of the Royal Challengers Bangalore. He said, “We have made some changes to the squad pertaining to the situation. We have come a long way and have shown steady progress as a team. The addition of Wanindu Hasaranga, Tim David, and Dushmantha Chameera couldn’t have come at a better time during the replacement window; as we aim to continue with the momentum, building on our performance from earlier this year. Hesson seemed to be pleased about Hasaranga’s inclusion in the squad.

“One thing we can say is we have replaced Adam Zampa with Wanindu Hasaranga. Certainly delighted to have Hasaranga on board. He gives us some balance; obviously from a wrist spin point of view and also plenty of batting capability”, he said. Hasaranga has been known for being quite good with the bat too. Chameera was good too, and picked three wickets in the three T20Is that Sri Lanka played against India. Hessonis quite confident about Chameera’s ability as well and said, “Chameera, another [from] the Sri Lankan contingent, he is bowling extremely well at the moment. I know him well, having coached against him. He’s got genuine pace and also his white-ball game has developed significantly over the last few years.”

Stepping down of head coach

The RCB also announced that Simon Katich has stepped down as the head coach. Mike Hesson shall be officiating as the head coach for the remainder of this season. The head and vice-president and head of the franchise; Rajesh Menon, said, “Simon Katich, the head coach of RCB; has decided to step down as on date, mainly due to personal reasons; and we, as management, support his decision and completely back him on this. As per the [franchise’s] business continuity plan, Mike Hesson will step in and discharge the duties of head coach until the end of this tournament.”

Rajesh Menon also informed about the travel plans of the team. He said, “The team will depart via a chartered flight on August 29, in the afternoon. Once we land in the UAE, again we will have a six-day hard quarantine and the testing protocol as per BCCI. As for the overseas players and support staff, they will be coming in on August 29 and they will also undergo six days of quarantine there.” The changes to the squad do seem exciting. Let us hope for some more good cricket this time.