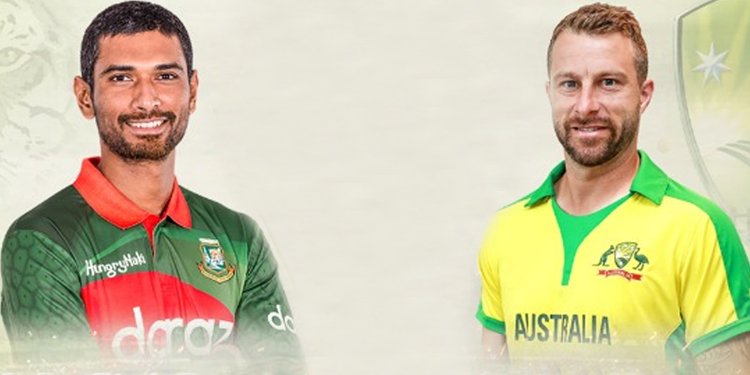 Bangladesh and Australia are now facing each other off for a five-match T20 series. Australia is currently on its tour of Bangladesh and the two teams are playing their first-ever T20 bilateral series. The first two T20s have already been played, and the hosts, Bangladesh have won both the matches, much to the delight of its fans and to the disappointment of the Australian fans.

The third T20 of the series is set to be played at the Sher-e-Bangla National Stadium in Mirpur in Dhaka on the 6th of August, 2021. In-person attendance shall not be allowed for this match because of the ongoing pandemic in the host country. The match will begin at 6 pm of Indian Standard Time. This match will be of a lot of importance as the host teams will secure the series if they win it. On the other hand, the visitors will be looking to fight back in this match and prove their capability in handling foreign conditions. Let us have a look at the details of this match.

This T20 series has been a proving ground for both teams. Australia had not been able to win the previous series against West Indies, and thus it was seeking to prove itself in Bangladesh. Till now, Australia had a good record against Bangladesh. They were wishing to emulate their previous record in their first bilateral T20 series against Bangladesh as well. However, current Bangladesh has proven to be quite good. The team boasts of both a sharp bowling attack as well as good batsmen.

Both the Bangladeshi spinners and the fast bowlers have been quite good so far. This will be a do-or-die match for Australia given that its hopes of winning the series will be doused if they lose the match. This time, Australia has not been able to translate its success in the Big Bash League into that on the international stage. Bangladesh, on the other hand, will register their first series victory against Australia if they win this series. That in itself will be a huge achievement for this team, which is a relatively new entrant in the world of cricket if compared to teams like Australia, England and India.

Australia has not been having a good run in this tournament so far. The only exception would be Mitchell Marsh, who has been good with both the bat and the ball. Bowler Josh Hazlewood has also been quite good so far. The other players have not been able to adjust to the conditions so far. In such a situation, there has been news about Ben McDermott returning to the squad. There is no news of any other change in the Australian squad so far.

On the other hand, Bangladesh seems to be in very good form this time. They have had multiple players who one should watch out for. The brilliant Shakib Al Hasan is as good as ever and has been extremely good in stopping the flow of runs. Mahedi Hasan has also been good in controlling the runs, as has been Shariful Islam. Ace fast bowler Mustafizur Rahman was brilliant in the second game while Nasum Ahmed was a vital player in the first one. Bangladesh may not be bringing any changes to their team.

The pitch conditions have not been favorable to batting so far and it is likely to remain the same even in this match. Australia has been facing trouble in adjusting to these conditions so far and this will be a challenge for them in this match as well. There are predictions of thunderstorms as well and the temperature will be hot and humid. Bangladesh has won five of the last six matches it has played. Australia on the other hand has won only one of the last six matches it has played.  In fact, the visitors have recorded two of their lowest totals in T20 matches in this series. Among the Australian bowlers; Mitchell Starc has reached the milestone of 50 wickets in this series while Adam Zampa is one wicket away.

Bangladesh does have the upper hand in this match but Australia should not be written off. They are capable of giving a good fight and hopefully, they will. Fans should definitely look forward to this match.