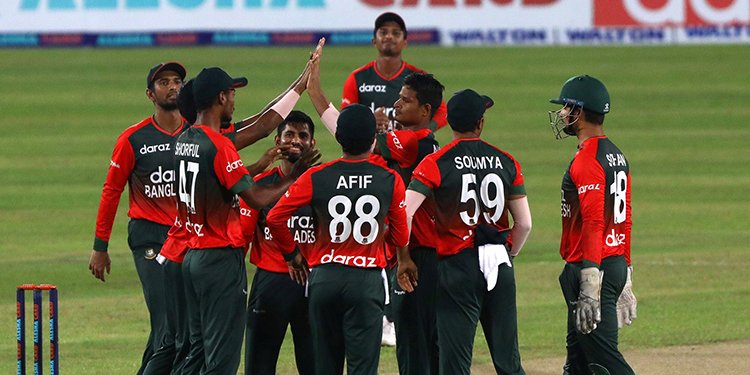 Australia and Bangladesh are currently facing each other off in a five-match T20 series. Australia is currently touring Bangladesh after their tour of the West Indies. The T20 series began on the 2nd of August, 2021 at the Sher-e-Bangla National Stadium in Mirpur, Dhaka. So far three T20 matches have been played and the home team has secured win in all three matches; thus securing a historic series win against Australia.

This is the first-ever bilateral T20 series between the two teams and Bangladesh’s series win is needless to say; a record in itself that will be etched in the history of Bangladeshi cricket. The importance of the win can also be judged by the fact that Bangladesh has never secured a win against Australia in any of the matches it has played in cricketing tournaments. In this match, Bangladesh was able to beat the visitors by 10 runs. Let us have a look at the different details of this historic win.

Bangladesh already had an upper hand over Australia since the beginning of this series. It had won the first two matches of the series thanks to its brilliant bowling attack which is comprised by the likes of bowlers like Mustafizur Rahman, Shakib-al-Hassan, and Mehadi Hassan. The stakes were quite high in this match as everyone knew that Australia would be trying its best to bounce back while Bangladesh would be eying the first series win against the Aussies. Bangladesh won the toss and opted to bat.

The first innings did not go as smoothly as planned for them though. They lost the first two wickets in quick succession in second and third over. Josh Hazlewood and Adam Zampa got the first two wickets in successive balls. The innings was started being rebuilt by Mahmudullah and Shakib-al-Hassan; two veteran and reliable players of the team, but again Hassan departed early.

Mahmudullah then acted as the anchor of the innings while wickets kept on tumbling on the other end in quick succession. A sluggish pitch did not aide their cause much. In fact, the home team ended up losing three wickets in a space of 22 balls. On the 20th over, Mahmudullah brought up his fifty. However, he perished in the same over as debutante Nathan Ellis picked up a hattrick. Apart from Mahmudullah, he also picked up the wickets of Mahedi Hassan and Mustafizur Rahman and Bangladesh were able to put 127/9 on the board.

Australia did not start their innings well as Mathew Wade departed early. Mitchell Marsh and Ben McDermott started salvaging Australia’s innings as they slowly started stitching up a vital partnership that looked like it will drive the team to victory. However, things changed with the McDermott’s departure on the 13th over, before which they had scored 69 for one wicket. The 68 run partnership was finally broken and this began Australia’s downfall in a run chase in which they seemed poised to win easily.

While Shakib picked up McDermott’s wicket, Shoriful picked up Henriques’s and Marsh’s wicket. Alex Carey tried scoring some shots but the Bangladeshi bowlers bowled well to limit the runs. In the 19th over, Mustafiqur Rahman gave away a single run. With 22 runs to win off the last over, Australia had a huge challenge. Although Alex Carrey was able to strike a six off the first ball; Mahedi Hassan was able to keep it tight and the Australian innings ended at 117/4.

This win has been dubbed historic by thousands of Bangladeshi fans, who have taken to different social media sites to express their joy. Many other people, including former cricketers, journalists, and fans from other countries and ethnicities have congratulated the Bangladesh tigers. Among them are Wassim Jaffer, the former Indian cricketer, and Daniel Brettig, the cricket journalist. People have been praising Mustafzur Rahman particularly a lot for his contribution to this series. In this match, Rahman delivered nine runs off three overs. He was instrumental in capping the runs of the Australian batsmen. Rahman has been quite good in the earlier matches as well and has rarely given runs away. One fan also pointed out that despite the win; Bangladesh does need to better its performance in batting for that is where it was lacking in the past few matches.

Bangladeshi fans and the cricketing community across the world have many reasons to rejoice. The good performance of an “underdog” team is always beneficial for the game in the long run and helps propagate it and increase its popularity further. World cricket can certainly improve by far if other teams like Ireland and Afghanistan can emulate similar feats. This will ensure good, competitive cricket across the world.