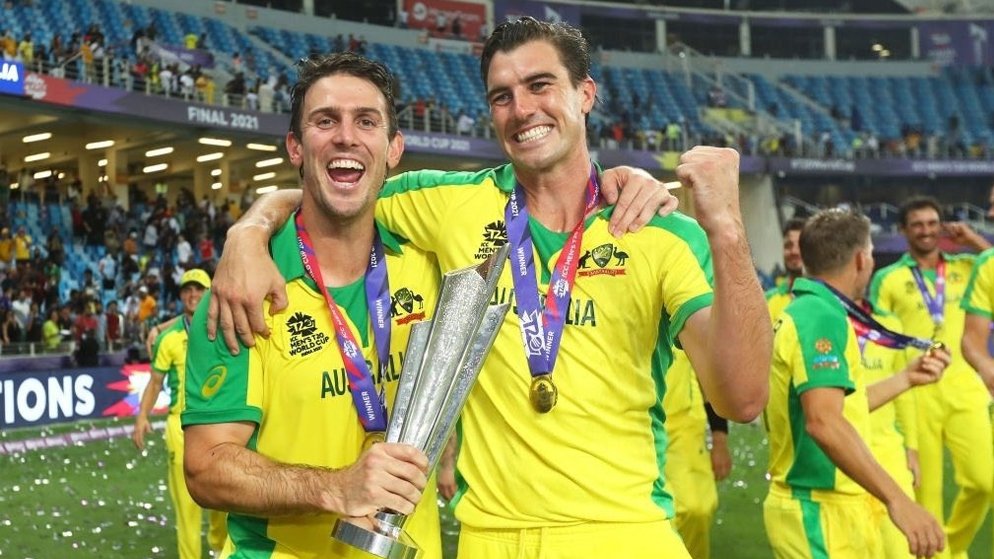 The night sky in Dubai lit up on Sunday night with fireworks as a jubilant Australian team lifted their first ICC Men’s T20 World Cup trophy. Their opponents New Zealand simply could not contain a free-flowing Australian chase. Sent to bat first after winning the toss, this Australian team had it all worked out in the drawing-room. Kane Williamson-led New Zealand had put on a decent total on the board- 172, but it was not enough for a dominant Australian batting display as they chased it down with 7 balls to spare.

Going into their eleventh major ICC final, the Men in Yellow showed no signs of weakness while hammering the Kiwis all over the park. As bad fate would have it for captain Kane, he lost the toss to his counterpart Finch. The result of the toss made a big part in deciding the outcome of the match. Teams batting second have won all but one in the just-concluded tournament.

The Australian side had joined this competition after underwhelming performances against the West Indies and Bangladesh. No one saw them reaching the latter stages of the competition, let alone winning it.

Aaron Finch talked about this when he said, “This is huge. To be the first Australian team to be able to do it. So proud. We knew our backs were against the wall. We had some great individual performances, some great team performances.”

Talking about star performer David Warner, Finch said, “Can’t believe people wrote him off saying he was done. That’s when he plays his best cricket. Was almost like poking the bear.”

Finch added, “The player of the tournament for me is Adam Zampa. Mitch Marsh – what a way to start his innings today. Wade came into this game with an injury cloud but got a job done. Stoinis did the business.”

Australia head coach Justin Langer reacted to his side’s performance in this fashion-  “Everyone that wins a World Cup says it’s hard to process, it’s hard to put in words, but this is such a group of people. Every coach and every captain says the same but we have got some amazing cricketers here. There’s enormous talent in the team. When we were in WI and Bangladesh, there were a few missing pieces, Mitch Marsh took one of those pieces and he’s been brilliant.”

New Zealand looked like the team to beat for most of the tournament. Their only loss had come in the hands of Pakistan. Otherwise, their graph had been always on the high. However, due to a handful of factors, they could not conjure up the performance that they had hoped to put up in the final.

Talking to the media, New Zealand skipper Kane Williamson said, “It was nice to build some partnerships and get what we thought was a competitive total. Only to be chased superbly by Australia. They’re a fantastic side. We certainly made every effort. Guys came out and committed to their plans. They didn’t give an inch really. Really proud of our team’s efforts throughout. Came here in the final and gave it our best shot but it wasn’t enough. Conditions varied a lot from venue to venue but we adjusted well. Nice to get to the big dance. Credit to Australia.”

Mitch Marsh, the man-of-the-match had been troubled off late due to injuries. But on the grandest stage of all, he delivered with a brilliant 77 not out to give his team a resounding victory. Player-of-the-tournament David Warner had a lot to do to earn back the respect he seemed to have lost lately. He had been treated unfairly by his IPL team SRK and was surrounded by controversies for some time. Determined to reply to his critics, he shone throughout the World Cup and ended as the second-highest run-getter. His 53 at the opening slot gave his team the solid start that was expected of him and that built the foundation for players such as Mitch Marsh to capitalise on.

The next edition of the ICC Men’s T20 World Cup will take place in 2022 in Australia. Seeing as they have come from nowhere and won this year’s edition, the pundits are not shying away from betting on Australia to win the trophy on their home turf. If they keep hold of their scintillating form, it would not come as a surprise to see Australia winning back-to-back T20 World Cups and becoming the world-dominating force they once were.