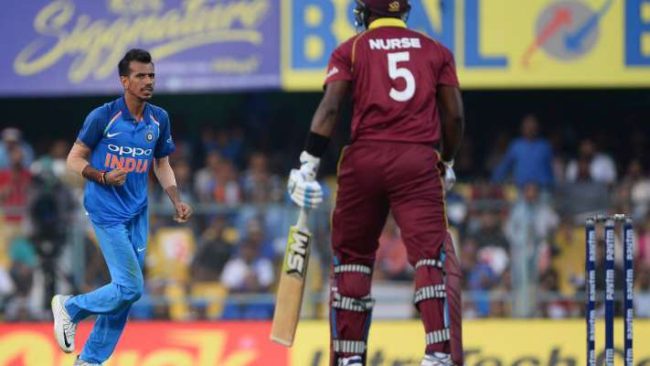 Yuzvendra Chahal breaks into top-10 ODI bowlers list at the back of a fairly successful ODI series against Windies, where he picked up five wickets in his three outings.

The biggest gainers in the rankings came from the opposition dugout though, as Shai Hope and Shimron Hetmyer jumped up 22 and 31 spots respectively to take up the 25th and 26th ranks. Young Hetmyer’s surge was down to his excellent series tally – the best for Windies – of 259 runs at 51.80. Hope came close second to the 21-year-old, with 250 runs at 62.50.

Among others for the winners of the five-match series, Jasprit Bumrah achieved career-high rating points of 841 – the best tally since Shaun Pollock’s 894 in 2008. Like Chahal, Bumrah’s exploits were also restricted to just three outings, but he emerged with six scalps – four of which came in India’s defeat in the third ODI. Rohit Sharma matched the Indian pacer, in gaining his personal best rating points of 871, keeping top-ranked Kohli (899 points) on his heels.

The Bangladesh trio of Soumya Sarkar (51st), Imrul Kayes (54th) and Mehidy Hasan (45th) made the most of the opportunity in the home series against Zimbabwe, which the visitors lost 3-0.

In the team rankings, England and India, at 1 and 2 respectively, have put some daylight between them and the chasing pack – consisting New Zealand, South Africa, Pakistan and Australia – that is separated by just 12 points. ODI series between Australia and South Africa, and Pakistan and New Zealand in the second week of this month could thus have a bearing on the table.

The worst that the third-placed New Zealand can do is drop down by one spot, as long as South Africa win at least one of the three ODIs they will play against Australia and New Zealand don’t win any.