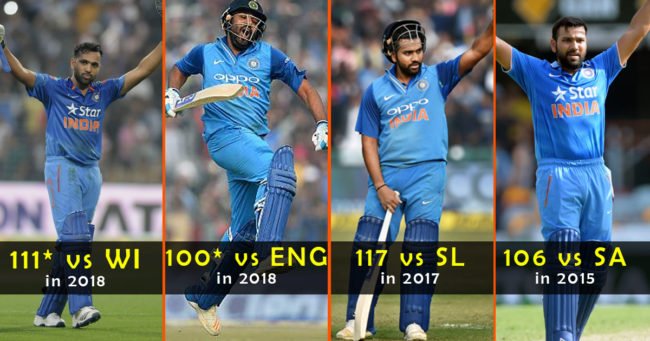 Rohit Sharma cracked his fourth T20I ton when he scored 111* against West Indies at Lucknow. The ton helped India wrap up the T20I series 3-0.

Rohit Sharma, thus, became the first player to crack four tons in T20Is. Rohit has been rewriting record books since he was asked to open in 2013. And he is not letting any opportunity to have a go at the opposition bowlers.So, which of his four T20I tons is the best till date?

This knock came against a low-ranked team West Indies who are the current World T20 champions. But the Windies, who are missing their star players, played like novices in the limited-overs series, especially the T20Is, against India. And hence, this T20I ton of Rohit would not rank high in his top T20I knocks due to the quality of the opposition. Nevertheless, Rohit was a treat to watch with his big hitting. Rohit slammed 61-ball 111* with 8 fours and 7 sixes.

This was the most decisive T20I ton from Rohit Sharma’s bat as it came in the decider with the series levelled 1-1 against England. India were chasing a big target of 199 and Rohit anchored the chase with 100* off 56 balls with 11 fours and 5 sixes. He was helped by cameos from Virat Kohli and Hardik Pandya as India chased down the target comfortably. Rohit showed great maturity to play a knock of value when the team needed it most and steered India to a memorable series win in England.

It was the most destructive T20I ton from Rohit Sharma’s bat as he was dismissed in the 13th over, and looked in danger to score a double ton in T20Is. He was in a punishing mood as he slammed 12 fours and 10 sixes in his 43-ball knock at a strike rate of 274.41. His opening partner KL Rahul’s brilliant knock of 89 was overshadowed by Rohit’s blitzkrieg.

It was the first T20I ton of Rohit Sharma and he had to painfully see it going in vain as India lost the match by 7 wickets. JP Duminy spoiled India’s party with a knock of 34-ball 68*. However, as long as Rohit was in the crease, India looked to score beyond 220, but his dismissal in 16th over saw India settling for 200/3. India fell 20 runs short on a flat wicket. Rohit slammed 12 fours and 5 sixes in his 66-ball knock.

Rohit Sharma’s 100 against England at Bristol was his best T20I ton so far as it came in a pressure game in a virtual final. He held his calm and composure to steer India to a T20I series win against England in England in 2018. And that was the only triumph for India in a disappointing tour of England.