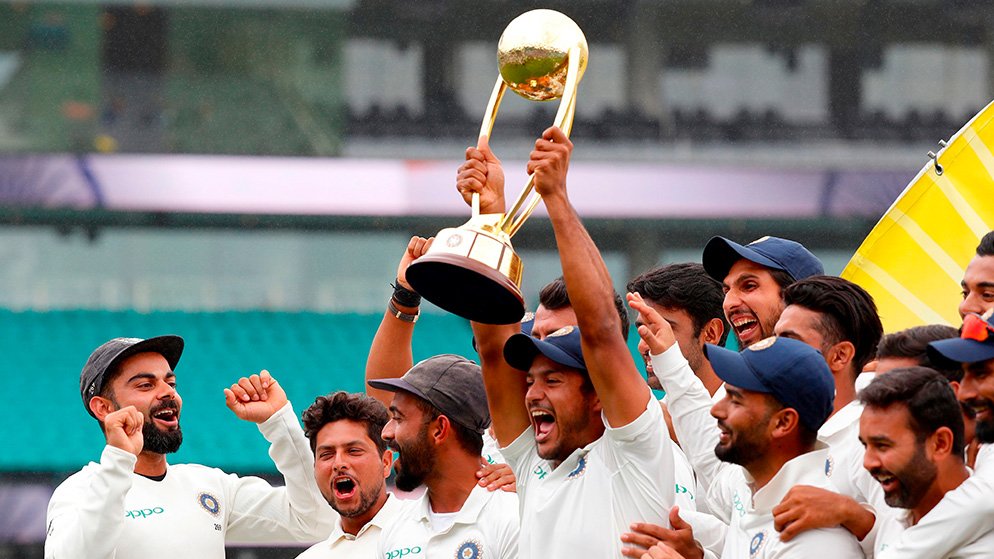 Cricket fans in India had to face a double blow after it was announced that the captain of the Indian Test team, Virat Kohli, had made the call to step down from the captaincy position following the defeat to South Africa. This sudden news was met with a flurry of emotional and congratulatory messages on different social media platforms over the weekend.

Shock Waves Sent Around The Cricket World By Sudden Call

Kohli’s announcement on Saturday has come as a shocker to his die-hard fans around the globe. Many of them believe that Kohli has been pressured into making this decision about his career. During the just-concluded 3-match Test series versus South Africa, Kohli showed his class by scoring valuable runs on complex playing grounds but could not guide his team to victory in the third and final match. A 2-1 defeat at the hands of the Proteas was enough for the 33-year-old masterful player to contemplate the situation and take the drastic call.

During his interaction with the media, Kohli talked about his journey of being the skipper for the past seven odd years and remarked, “I’ve left nothing out there.” He was visibly upset about losing the series to the Proteas after winning the first Test match at Centurion. Kohli admitted that coming close to winning a Test series against South Africa in South Africa and then crashing at the crucial moments would haunt him for quite a while. Virat Kohli said that the series defeat has been “a tough one to take.”

Kohli Thankful To Mentors And Collaborators On Way To Success

Since taking over from MS Dhoni as the captain of the Indian Test side in 2014, Kohli had the assistance of several individuals on his quest to make his team the best in the world. While answering questions to media persons, Kohli said, “A big thank you to MS Dhoni who believed in me as captain and found me to be an able individual who could take Indian cricket forward.”

Talking about his journey as the Test skipper, Virat Kohli released a personal statement on social media platform Twitter on Saturday; which reads- “It’s been seven years of hard work, toil and relentless perseverance every day to take the team in the right direction. I’ve done the job with absolute honesty and left nothing out there. Everything has to come to a halt at some stage; and for me as Test captain of India, it’s now.” He further added, “There have been many ups and downs along the journey; but never has there been a lack of effort or lack of belief. I have always believed in giving my 120 percent in everything I do; and if I can’t do that, I know it’s not the right thing to do. I have absolute clarity in my heart, and I cannot be dishonest to my team.”

Tensions Between Kohli And The BCCI Probable Reason Behind Decision

It should be noted here that Virat Kohli has been having trouble dealing with the board since September of last year. It all began when Kohli informed the BCCI about his intention to step away from T20 captaincy once the T20 World Cup gets over. Soon things went awry as the BCCI removed Kohli from the ODI captaincy role without considering his view. It was all a matter of time before Kohli was expected to develop something drastic.

Despite the rift between them; the BCCI sent the heartiest wishes to India’s most successful Test captain in its statement on Twitter. It reads- “BCCI congratulates #TeamIndia captain @inVkohli for his admirable leadership qualities that took the Test team to unprecedented heights.”

With the end of Kohli’s captaincy, a royal era of Indian Test cricket has ended. Virat Kohli ends his stint as captain of the Indian Test side with the best record. He has a winning percentage of 68. Out of the 68 Tests that he has led India, the team has won 40 Test matches. Under Kohli’s leadership, India has lost only 17 times. Kohli also led his side to the number one in the ICC Test cricket rankings. Perhaps the only regret Kohli would have was losing the World Test Championship Final against New Zealand in June 2021. He would have loved that crown amongst his other glorious achievements. Putting records aside, Virat Kohli will remain one of the greatest Test captains that India has ever produced.