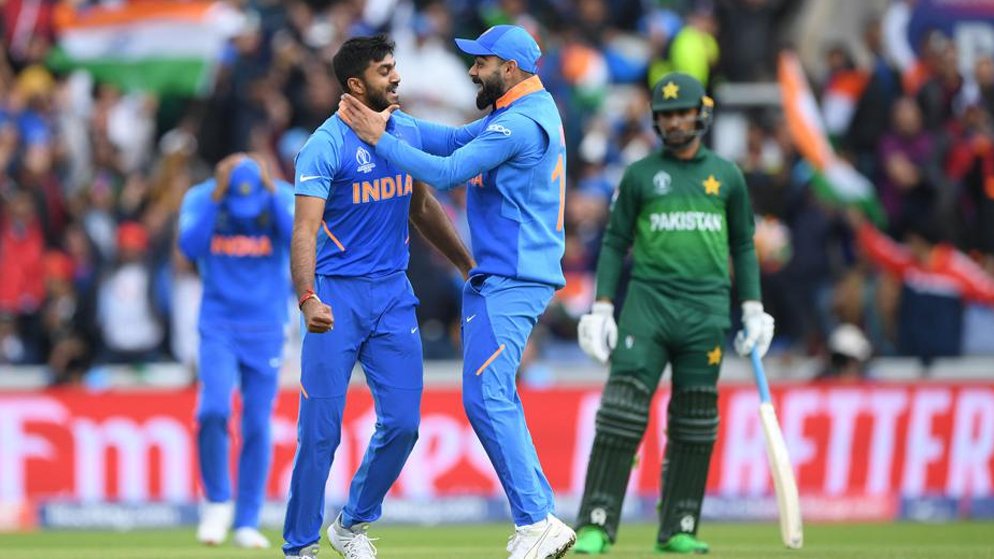 The T20 Cricket World Cup is underway and talk of rivalry between India and Pakistan is gaining heat. The two neighbours are scheduled to play with each other on Sunday, 24th October.

This fixture has always been a treat for cricket lovers the world over, but more so for the subcontinent dwellers. Brushing aside the rhetorics of peace and brotherhood, the politics of the two neighbouring countries have on more than one occasion come to the fore through the on-field antics of players from both teams. Supporters from both sides of the border do not mind such entertainment.

Let us have a look at the top 5 such incidents which have ignited the passions of viewers from two countries where cricket is more than just a game.

Controversy: Miandad Gives It Back To More

Arguably the most memorable of all controversies surrounding India-Pakistan cricket matches was the clash between Indian wicketkeeper Kiran More and Pakistani legend Javed Miandad during the Benson and Hedges Cricket World Cup of 1992. This was the first time the two bitter rivals were facing each other in a world cup tournament and expectations were running high. While Miandad was at the crease, More was being extremely animated and vocal, continuously firing up the other players and appealing vehemently whenever a chance came. This got to the head of Miandad and during an incoming Tendulkar delivery, Miandad stopped the bowler and engaged in a dialogue with More. He then complained to the umpire about More’s behaviour.

However, More continued to irritate the batsman. In a subsequent delivery, Miandad ran back hurriedly to his crease in a failed attempt to take a single. More, as usual, appealed to the leg umpire for a possible run out. What happened next was both hilarious and bizarre. Miandad started jumping on the crease in the manner of a frog imitating More’s fervent appeals.

From 1992 we come to the 1996 World Cup; where India was playing a strong Pakistani side having the likes of Saeed Anwar and Aamir Sohail as openers. The latter was in a demolishing mood and hit Prasad for a four on the cover boundary. After hitting the boundary, he grabbed Prasad’s attention and gestured towards the offside cover boundary, indicating where he would hit the next ball. Prasad remained calm and went back to take his stance. The very next delivery saw Sohail going for a drive on the onside and missing the ball completely. Prasad had clean bowled the batsman. A generally composed Prasad could not hide his emotions and made his feelings clear by showering the choicest expletives while pointing towards the pavilion showing Sohail he needed to go.

One of the softest cricketers to ever grace the game of cricket; Inzamam-ul-Haq lost his cool when a member of the Indian part of the spectator stand kept on calling him “aloo”; translated to potato in English. Since Pakistan was fielding then, Inzamam instructed a Pakistani squad member to wait with a cricket bat outside the boundary rope. When Inzamam heard the word again, he rushed towards the culprit with the bat, clearly seething with anger. It was the police that stopped the legendary player from causing harm to the spectator and his career. He was banned for two matches.

Gambhir has always been a firebrand cricketer. So it did not come as a surprise when he collided with Afridi while taking a single off his delivery. This came right after he had hit him for a boundary; following which a few words were directed towards Gambhir by Afridi. After making physical contact, they got into an ugly verbal spat. Both Gambhir and Afridi were found guilty and fined by the match referee.

Controversy: Gambhir And Akmal Have A Go At Each Other During The Drinks Break

We have Gautam Gambhir one more time in our top five. This time around it was the Pakistani wicketkeeper Kamran Akmal who instigated Gambhir’s wrath by being too loud with his appeals. India was in a decent position at that time with Dhoni batting at the other end. The incident occurred during the ensuing drinks break when Gambhir and Akmal locked eyes in a face-off and were on the verge of making physical contact. Dhoni salvaged the situation by dragging Gambhir away.

India vs. Pakistan matches have always produced heated moments that have at times overshadowed the brilliant cricket put on display by the two teams. Here’s to hoping that these controversies are a thing of the past so that cricketing fans from both the countries and from around the world can enjoy the game.