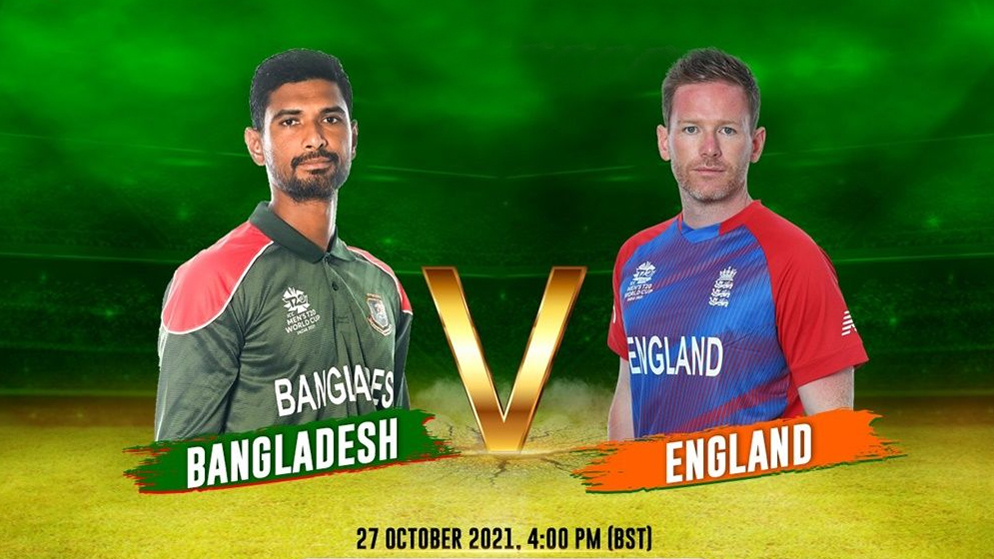 Cricket fever is on the rise as we continue to witness jaw-dropping encounters in the ongoing Men’s T20 Cricket World Cup tournament. In our next match, we have a confident England side taking on a struggling Bangladesh in the Super 12 round. This match is going to be played in Abu Dhabi, at the Sheikh Zayed Stadium. It will begin at 2 pm IST on Wednesday, October 27th. This will be the first time that England will face Bangladesh in a T20 international match.

It would be quite hot and humid in Abu Dhabi on Wednesday afternoon. Temperatures are expected to hover around 32 degrees centigrade. As has been declared by the ICC, spectators would be allowed in the stands, but only up to 70 per cent of the total capacity. Covid protocols such as wearing masks would be in place at all times.

England would be brimming with confidence going into this match, as they easily outsmarted a West Indies side in their first outing in the tournament. Captain Eoin Morgan and his talented English side completely decimated a West Indies side composed of superstars like Chris Gayle, Kieron Pollard and Dwayne Bravo. It was a strong display by the reigning ODI World Champions, in which they bowled out West Indies for a paltry 55. The English batters had an easy task of chasing a low total, a target which they saw through with 70 balls remaining to be bowled. That win has stretched England’s record to six T2O international victories out of the last seven they have played.

Bangladesh would be looking to make a statement this Wednesday against their much stronger opponent. They defeated cricketing minnows Papua New Guinea and Oman to progress to the Super 12 round, after a surprising defeat at the hands of Scotland. Their real test came while facing Sri Lanka, a match where they could not restrict Sri Lanka from scoring a target of 171. Sri Lanka had finished the innings with a five-wicket victory.

The stand-out performer from England this season in T20 internationals has been Adil Rashid, who has already taken 18 wickets in 11 matches for the Three Lions at an economy rate of 6.91. In the match against the West Indies, Rashid took a match-winning 4 for 2 in the 2.2 overs that he bowled. He took care of the West Indian middle and lower-middle order and sent away the likes of Kieron Pollard and Andre Russell.

Veteran all-rounder Shakib Al Hasan is the one player that England would want to control. He has scored 118 runs and taken 11 wickets so far in the tournament and would be carrying an ample amount of pressure to perform on Wednesday. Youngster Mohammad Naim is the other player who has displayed amazing potential for Bangladesh. The opener has scored two fifties and has a healthy strike rate of 121.15.

News from the England camp hints at the possible omission of Mark Wood from the playing eleven since he has picked up an ankle injury.

As the pitch in Abu Dhabi is seam-friendly, Bangladesh would most likely add Taskin Ahmed to the starting line-up. He would take the place of Nasum Ahmed. It would be interesting to see if Liton Das retains his place after performing badly against Sri Lanka. He had scored only 16 runs, missed two catches and was involved in a bust-up against Sri Lankan player Lahiru Kumara.

Experts are of the view that this would be an easy job for England, given their recent form in T20 internationals. A Bangladesh win would be nothing more than a tournament upset.