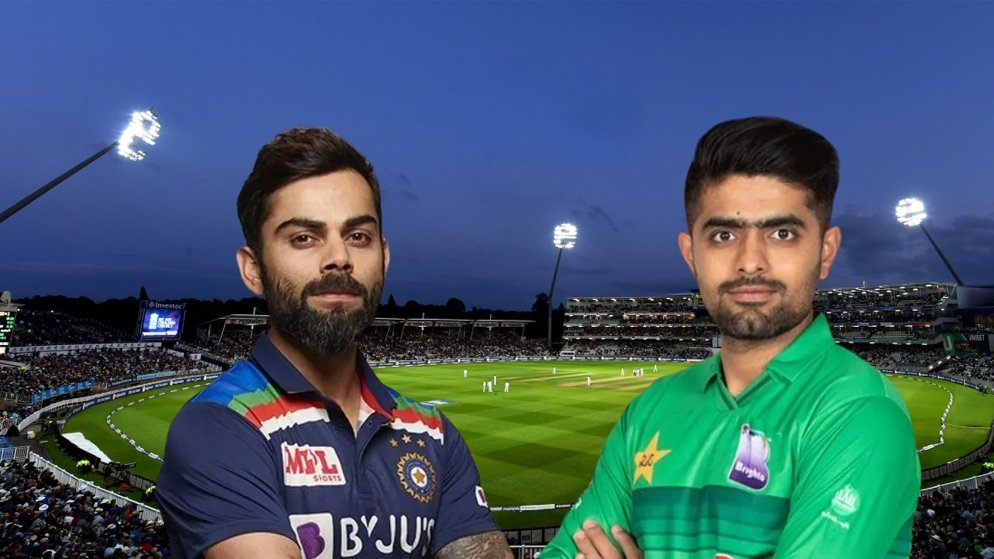 It is almost time for the curtain to rise once again on one of the grandest stages of world cricket, the Men’s T20World Cup tournament. The eagerly awaited tie between India and Pakistan is scheduled to be played on Sunday, 24th October. Two of the biggest cricket-playing nations and bitter rivals on and off the pitch will go to war on the pitch to the delight of millions of cricket viewers the world over.

Both India and Pakistan have been placed in Group 2 and will be playing their opening match against each other as part of the Super 12 round. It will be played in Dubai, UAE, at Dubai International Stadium, the same venue which hosted the final of the IPL 2021 between CSK and KKR a few days ago. The match is scheduled to begin at 19:30 hours (IST). Indian viewers would be able to watch the match live on the Espn Star Sports Network. Different streaming services would also be providing the same service.

The Men in Blue are the clear favourites going into this game, seeing as they have an astounding 12-0 record over their counterparts across all formats of ICC World Cup tournaments. Pakistan captain Babar Azam would be hoping to turn the tide this time around, although the Indian camp would be brimming with confidence after two straight victories in the practice matches. India defeated other tournament heavyweights England and Australia convincingly. The recently concluded IPL, played in the UAE, could also give Indian players an advantage as they would already be accustomed to the conditions of the field.

To the joy and respite of thousands of cricket fans in the UAE, the ICC has confirmed that stadiums would be filled to 70 percent of its capacity for all matches of the tournament.

The Dubai pitch has always favoured the batsman. So whoever wins the toss would most likely take up batting and put on a huge score. To the bowlers’ relief, the final overs of the second innings could see the pitch providing support to their efforts. The spinners may turn the game around in the middle overs for the side bowling second. All in all, spectators are most likely in for some serious ball bashing.

The weatherman has reported that it would be a hot and humid evening in Dubai, with temperatures circling around 31 degrees centigrade, with 62 percent humidity and 14 km/hr wind speed.

All eyes would be on Indian opener KL Rahul due to his blistering form throughout the t20 season. He was among the highest run-getters for Punjab Kings in the IPL and it is expected that he would replicate that touch wearing the blue jersey as well. The stylish Rohit Sharma is the other Indian stalwart who is also expected to put in a memorable innings to cement India’s stand in the game. Skipper Kohli is without the shadow of a doubt one of the greatest batsmen of the modern era and everyone wants him to get over his poor run of form for the national side and score important runs against the arch-rivals. Among the Indian bowlers, Jasprit Bumrah could hold the key to restricting Pakistan from scoring freely. He is India’s top strike bowler and the pressure would be on him to deliver for his captain.

On the Pakistani side, skipper Babar Azam is a threat to Indian bowlers due to the number of runs he has scored in his t20 career. Wicketkeeper-batsman Mohammad Rizwan could also flourish given his healthy scoring record in t20 internationals. The veteran Mohammad Hafeez is another important player who can change the course of a match on his day. With his performances in 113 t20s for his country so far; Hafeez can come out as the stand-out performer on Sunday.

Although too early to predict the eventual winners of the tournament; the outcome of this monumental clash would no doubt give us a glimpse of what is in store for us. Victory in this opening group match will fuel the morale of the competing teams and would go a long way in determining the progress of the tournament. As die-hard fans of cricket from the two countries would know; no World Cup is complete without a clash of the two titans