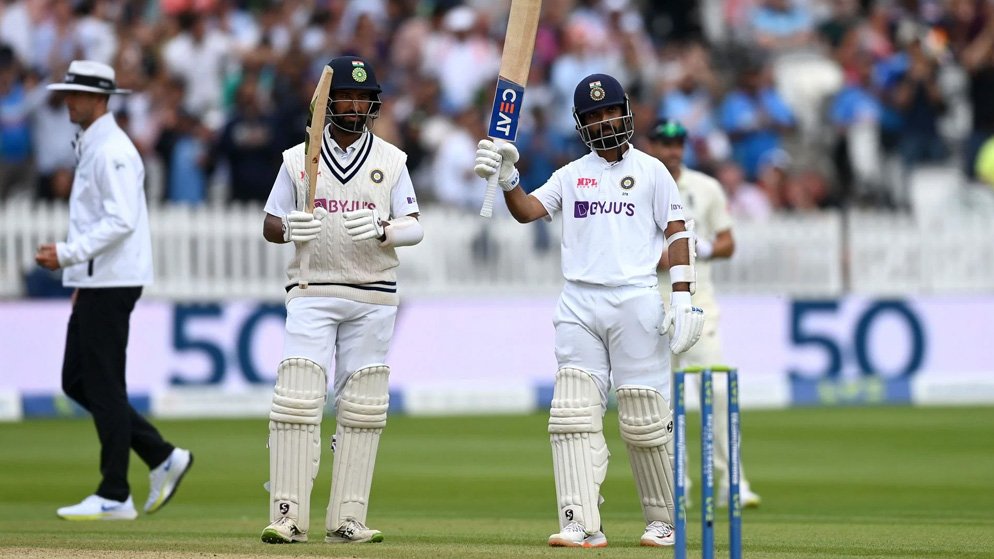 The underwhelming performances put up by two Indian batsmen in the current South African Test series have become a big issue in circles lately. It has caught the attention of several former Indian cricketers as well. One among those, Nikhil Chopra, has told reporters that Both Cheteshwar Pujara and Ajinkya Rahane do not deserve to be in the Indian Test team at this moment. Since the second Test is already underway, Chopra wants a changed batting line-up in the third Test match. The middle order of any team is the pivot that holds the inning together. In Rahane and Pujara’s case, they have contributed a total of 4 runs jointly in the Indian first inning on Day 1 of the ongoing second Test match.

While speaking to the media, ex-India player Chopra stressed the fact that Hanuma Vihari and Shreyas Iyer should be allowed to shine in the third Test. He said, “I don’t think the deliveries that dismissed Pujara and Rahane were wicket-taking deliveries. I would be surprised if Pujara and Rahane both feature in the third Test. Or one of them could make way for Kohli. If the series is secured, the last Test would be a good opportunity to play both Vihari and Iyer and groom them.”

Poor Form Plaguing Pujara And Rahane Since The Middle Of 2021

The two senior Test batsmen of Team India, Rahane and Pujara, have been struggling with their batting since the away tour of England in the middle of 2021. In the ongoing second Test versus the Proteas, Rahane completely misjudged a ball and got out on the first ball he faced. Pujara, on the other hand, looked uncomfortable during the short time he remained on the crease and could only muster 3 runs. The two players now find themselves in a sticky situation with quality batsmen in the Indian squad waiting for opportunities.

In the Indian first inning, most of the batters failed to tackle a disciplined South African bowling attack. The highest score came from the bat of KL Rahul, the player officiating as captain in the absence of regular captain Virat Kohli. Rahul went on to make a 50, before succumbing to a poor shot. He was one of several Indian batters who got out because of undermining the bounce that the pitch was providing the bowlers. This was also pointed out by Chopra when he added- “Out of the first 5 wickets, 4 came from the back of a length delivery.

The shot selection was poor. The batters were confused over leaving or playing those deliveries. It is easy to say from here, but it is difficult to bat accordingly in South African pitches on Day 1. As an international player, you can understand when a bowler is in rhythm, and if you see off that spell, you can target the other bowlers.”

Chopra Opines That Batting Would Get More Difficult With Time

The Wanderers is famous for being a pacer’s paradise. It gives a pace bowler an ample amount of bounce and swing. Speaking about the pitch conditions, Chopra had this to say- “It will be difficult to bat as the match progresses. The pitch is usually soft, to begin with, and the ball usually leaves dents on the surface, which then tend to become hard under the exposure of the sun. When the ball lands on these dried dents, it tends to take off in any direction. So, the decision to bat first was the right one.”

The fate of the second Test match between India and South Africa is hanging in a tight balance, with both sides looking capable enough to steer the match away from the other. With run-scoring being hard on the Wanderers wicket, this match may well turn out to be a low-scoring one. On Day 1 of the match, India finished their first inning after putting up only 202 runs on the board. In reply, a spirited South African ended at 229.

At stumps on the second day, India 85/2 lead by 58 runs with Rahane and Pujara batting. This has been a far better outing for the South African batting brigade than what was seen in the first Test match. They have visibly improved over a handful of days, and are more confident while facing the Indian bowlers. If India takes a lead of around 250 runs after the end of their second inning, they could well be in the driver’s seat. As it stands now, we are likely heading towards a nail-biting finish to this encounter.