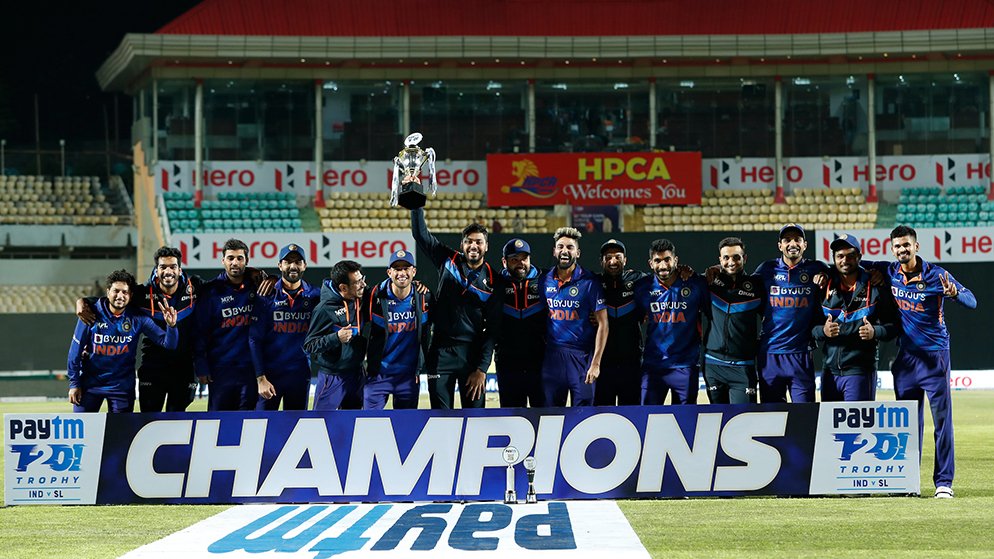 The 2022 Sri Lanka versus India T20I series has just concluded and Team India has emerged as the victorious side. For Team India, the celebrations began once Ravindra Jadeja and partner Shreyas Iyer finished chasing the target set by the Sri Lankans in the third and last T20 international match at the HPCA Cricket Ground in Dharamsala, Himachal Pradesh on a chilly evening on Sunday, February 27.

With this latest win against sub-continental rivals Sri Lanka, India has extended their win in the shortest format of the game to a record margin. On Sunday evening, India achieved a 6-wicket victory over a hapless Sri Lankan side that looked in complete disarray while facing the swashbuckling Indian batters. What makes this achievement even more outstanding is the fact that in both instances, India has whitewashed their opponents, showing cricket fans not just in India but around the world why Team India is a title contender for this year’s ICC Men’s T20 World Cup cricket tournament.

In Sunday’s game, Indian youngster and star batter Shreyas Iyer showed his class yet again by smashing a quick-fire half-century and remaining unbeaten on 73. The match was not going well when Shreyas Iyer entered the fray. When he walked in, India had already lost 3 wickets for the score of 89, and the pressure on the chasing Indian side was mounting gradually. Only 11 overs were bowled until that point when Iyer came on the crease. By the time he was done with his duty, India had finished reaching the score of 147, which was set by Sri Lanka, and another 19 deliveries were remaining to be bowled. Such was the dominance shown by Iyer and his batting companion for a long while, Ravindra Jadeja, that by the close of the innings, the Indian locker room was seen to be happy and relaxed. For his heroics with the bat, Iyer was awarded the man-of-the-match trophy.

Jadeja has been a vital clog in the Indian side for over a decade now. Having made so much contribution with both bat and ball down the years, it was expected of him to go out there and deliver when the situation demanded the most. As on most occasions, Jadeja did exactly that and successfully built a 45-run partnership with Iyer.

From the Sri Lankan side, it was batter Dasun Shanaka who stood out from the rest of the Sri Lankan players by putting up an unbeaten knock of 74, to help his team reach the respectable total of 146, after losing 5 wickets. With the bowl, India was disciplined and most of the Indian bowlers made sure that the ball was placed in the right length. It was newcomer Avesh Khan who returned the faith that the national selectors had shown by picking him, by taking two Sri Lankan wickets after giving away 23 runs.

Skipper From Both Sides Taking Positives

Rohit Sharma, India’s all-format captain spoke to the media during the post-match prize distribution ceremony and made these comments- “We played very well. Lot of positives came out from the series. Want to understand what kind of bench strength we have. Good to give opportunities to those guys. Important to tell guys not to worry about your positions in the team. Want to fill whatever gaps we have. Keeping that in mind we want to move forward.”

The Sri Lankan skipper Dasun Shanaka was asked about his experiences during the series versus India, to which he replied, “Want to congratulate India for a wonderful performance. Need some stitches on the hand. Been tough without our senior bowlers. Didn’t capitalize on the first six over today again today with the bat. Pace attack has been outstanding throughout the year or so. Not so much about pace but control. This is international cricket, we have to adapt can’t complain about conditions.”

The Sri Lankan players would rue lots of missed opportunities throughout the 3-match T20I series before heading back to their country. This has been a series that they would want to forget fast. However, seeing as the year 2022 is a World Cup year, and the T20 World Cup will be played in Australia, no team should wait for the pitch and weather conditions to favor them on the ground. The cricket grounds in Australia are famous for being tricky, and any team that does not learn how to adapt fast in a new environment would surely be decimated by a better-prepared side.