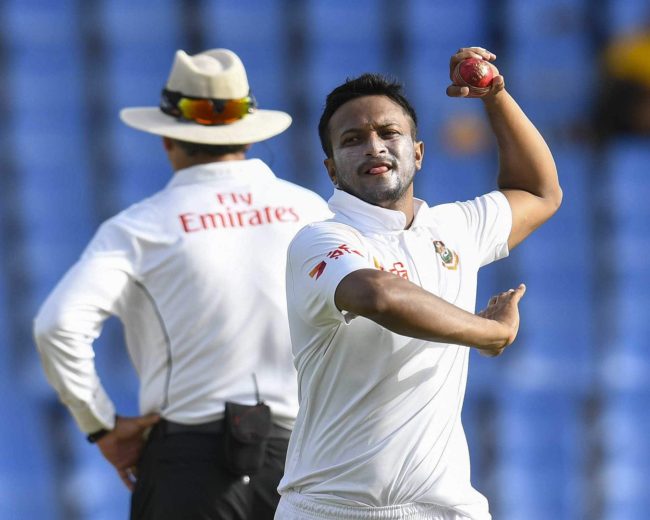 Shakib Al Hasan has been named in Bangladesh’s 13-man squad for the first Test against Windies, starting from November 22 in Chittagong. Shakib returns to lead Bangladesh.

The star all-rounder has been out of action since returning home midway through the Asia Cup with a long-standing finger injury that needed surgery. There were question marks over his participation in the multi-team event in UAE in September, and a back-and-forth of comments ensued between him and the BCB chief Nazmul Hasan regarding his fitness levels. Eventually, he decided to postpone his surgery and played, and ended up aggravating it further.

He left before Bangladesh’s Super Four game against Pakistan, which they won, and also missed the close final against India. The surgery and rehabilitation meant he missed the home series against Zimbabwe where the hosts suffered an embarrassing defeat in the first Test before managing to draw the two-Test series.

During his time away, Shakib feared his left little finger might never heal completely again, but in a massive shot in the arm for the hosts, he has passed fit to be part of the squad.

Another big-name inclusion in the squad is of Soumya Sarkar, whose last Test appearance came on the tour of South Africa in 2017.

Liton Das, who scored a grand total of 47 runs in four innings against Zimbabwe, has been axed, as has Abu Jayed, who was replaced after the first Test against Zimbabwe in Sylhet.

“It was great to see the return of Shakib as we believe his presence will bolster the morale of the team to a great extent,” said selector Habibul Bashar.

“We did not pick Abu Jayed and Shafiul Islam due to strategic reasons. We have got two pace bowlers in the team while we believe our spin will be more effective against the West Indian than our pace attack. Liton is not amongst the runs so we decided to have a look at Soumya who is doing extremely well in the recent past.”

Shafiul Islam has also been omitted, after he didn’t get game time in the recent home series. There was also no room for batsman Najmul Hossain and left-arm spinner Nazmul Islam, who debuted in the Sylhet Test but didn’t play in Dhaka. Instead, the selectors decided to draft in 18-year-old offbreak bowler Naeem Hasan. So as of now, Shakib returns to lead Bangladesh.

“We picked Naeem Hasan as we consider him to be one of our future prospects,” Bashar pointed out. “He is doing extremely well in the domestic circuit and we believe he can be a vital armory of our bowling attack.

“As far as left-arm spinner Nazmul Islam is concerned we are feeling he is yet not prepared for the longer version so we wanted to give him some more time in the other formats.”