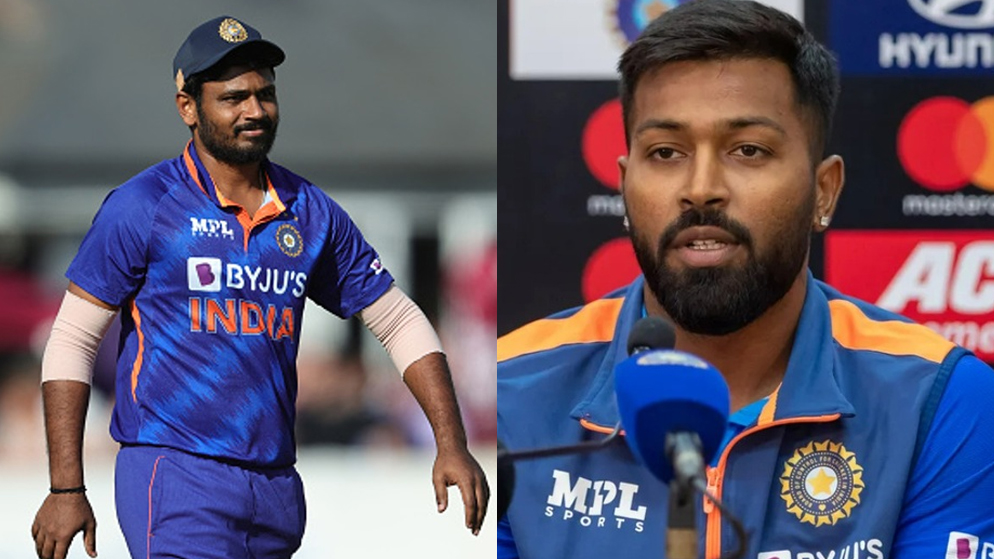 Team India is on Tour of New Zealand nowadays, showing good performances. Furthermore, the credit for the good performances goes to the new Indian Cricket Team Captain, Hardik Pandiya. At the same time, when you look at the performance of all newcomers, you will be happy to watch them. Almost every member of the team is performing well. The important point is that the captain of the Indian T20 international, Hardik Pandya, is performing well. Therefore, you can say that Pandya is leading from the front.

While talking to the press, Hardik Pandya answers that the players Sanju Samson and Umran Malik are unfortunately missing games. Furthermore, we will have a few more opportunities in the future, and everybody will get a chance to play and perform. At the same time, you need to look at the performances of two youngsters performing brilliantly. Let us look at the introduction of Sanju Samson and Umran Malik. Both are the future stars of team India.

Sanju Samson is one of the best players in the Indian T20i squad. Furthermore, you will find him a good hitter and a mature batter. He is one of the products of the Indian Premier League. Sanju has been playing IPL for a long and performing for his team Mumbai Indians.

Umran Malik is one of the fastest bowlers in the history of Indian cricket. Therefore, He is known as the Shoaib Akhtar of Team India. He is sometimes called Kashmir Express by his teammates. Umran Malik is a very talented bowler and a speed star in the current Indian cricket team.

Unfortunately, both the players, Sanju Samson and Umran Malik, did not get any chance to play in the current series. During a press conference, a journalist asked about their inclusion in the team. Therefore, will they be part of a team in the future or not? Captain says yes, they are in but unfortunately, Samson and Malik miss out on the series. Furthermore, every member will get a chance to deliver in the coming days.

Performances from the Individuals:

If you look at the 3-match T20i international series between India and New Zealand, India won it. Furthermore, the result of the first match of this trip from India was in favor of Heavy rain. If you review the Indian cricket team squad, you will find mostly new faces. Furthermore, the inclusion of young faces is boosting the team. Let us look at the performances of some individuals.

The top run-getters are Surya Kumar Yadav and Captain Hardik Pandya. At the same time, new captain Pandya is providing an opportunity to new players. Most of the new players are proving their selection right. It is now important to look at their performances for a future prospectus.

You can find a new Indian T20i team after the T20 world cup 2022. Their first tour is to New Zealand, and their new captain is Hardik Pandya. At the same time, the Indian team will also play the ODI series in New Zealand. The senior players are not part of the team during this tour. Therefore, in this team, most players are new, and it is their first experience playing in New Zealand.

On the visit of New Zealand, the ODI team has most of the members’ new and touring first team New Zealand. The captain of the ODI team for India is Shikhar Dhawan. One of the most stylish openers on the Indian team. Due to his experience and foam, he is now the team captain. Similarly, team India will also provide a chance to their young and new players in the ODI series. Therefore, Sanju Samson and Umran Malik can be found in the playing eleven during the 3 ODI series between India and New Zealand.

When you look at this article, you will find it is based on the statement of Indian T20i team Captain Hardik Pandya’s statement. Furthermore, that statement is regarding not including Sanju Samson and Umran Malik in the T20i series against the team New Zealand. At the same time, you need to look at the above discussion to find the results: they will get a chance in upcoming games. But it is unclear whether they will be included in the one-day internationals series against the New Zealand. The first ODI from 3 is scheduled on the 25th of November, 2022. You will find the squad on the same day after the toss to see whether both are playing. Therefore, the above discussion is completely about the answer to a question by a journalist from Hardik Pandya.