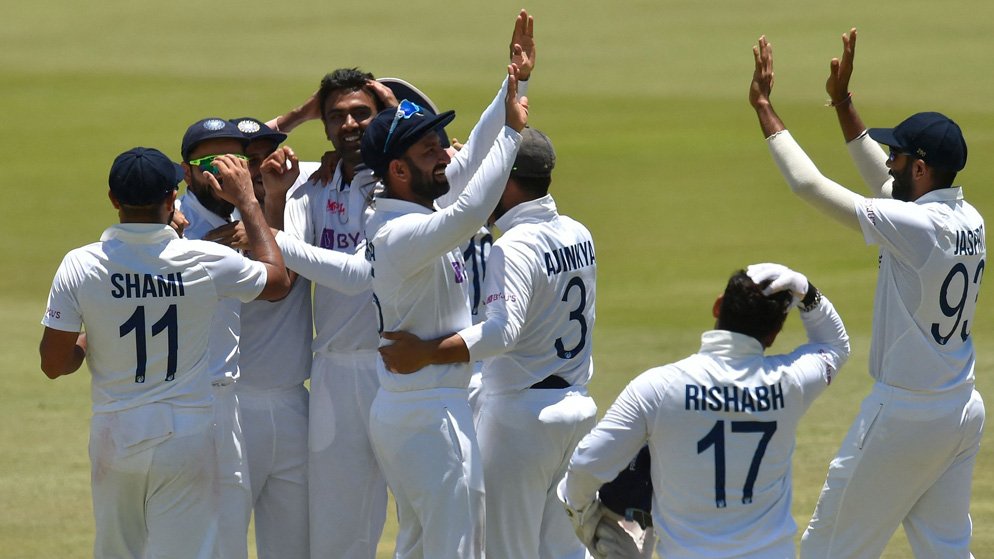 India has recorded a famous victory against South Africa on the fifth and final day of the first Test match in Centurion. This is the first time that Team India has defeated South Africa on this ground. The Test match, which began on Boxing Day, December 26, had seen one full day of action washed out due to rain. Despite that, the Indian side managed to pull off a great win over its opponents by a resounding 113 runs. This keeps India ahead in the 3-match Test series 1-0.

India Looked Confident From The Start Itself

When the Indian captain decided to bat after winning the toss before the start of the match on December 26, all eyes were set on the batting side. The green pitches of South Africa are not quite batter-friendly, and getting to any respectable total becomes a massive task for the visiting sides. However, Kohli and his men proved the critics wrong by posting a huge score of 327 all out at the back of a KL Rahul century. This brilliant performance by the Indians in the first innings set the mood for the rest of the match, with the bowlers doing very well to restrict the Proteas from reaching India’s mark in their first inning.

After taking a commanding lead at the end of South Africa’s first inning, India failed to capitalize on its strength. The Indian bowling department had done its job well when they stopped the South African batters from scoring freely. The South African batters could reach only 197 before being bowled out. That meant India was in a position of dominance, going into the second half of the match. However, that was not to be the case, as a lethal bowling attack headed by Kagiso Rabada, Marco Jansen, and Lungi Ngidi destroyed the Indian second inning. Out of the 174 runs that the Indian batsmen could muster, Rishabh Pant added the most runs. His 34 was the top score for an Indian batter in the second inning.

South Africa Lost The Script In Their Second Inning

With a steep target of 305 to chase, the South Africans had everything to play for in their second inning. As there was plenty of time for the South Africans to complete the chase, the game was seen as evenly balanced on day 4. But that was not to be the case this time out. A disciplined Indian bowling attack outclassed the South African top order. By the end of day 4 of the match, South Africa found itself in a precarious situation with a score of 94 for four on the scoreboard.

The skipper, Dean Elgar, was still there on the crease, batting at 52. This glimmer of hope was shut out on the final day when some quick fire bowling by the Indians removed all hopes of a South African comeback. By the time it was lunch on day 5, the Indians were already looking at a rare victory on South African soil. Batters Temba Bavuma and Marco Jansen were on the crease, with scores of 34 and 5, respectively. South Africa still needed 123 runs to win, with two sessions of play still to go. In the end, the Indian bowlers made the country proud by dismissing the rest of the opposition batsmen in quick succession.

Skipper Kohli All Praise For His Star Bowler Shami

At the post-match prize distribution ceremony, the Indian captain looked beaming with confidence after his side pulled off a resounding victory. When asked about what he felt about the match, Virat Kohli said, “Got off to the perfect start. Have to understand one day was washed out – it shows how well we played. It’s always a difficult place to play against SA (Centurion). The discipline that the batters showed. Winning the toss, batting first overseas is a tough challenge. Credit to Mayank and KL the way they set it up.”

Kohli was particularly impressed by the performance of Mohammad Shami and made it clear when he had this to say about the pacer- “Absolutely world-class talent (Shami). For me, he’s in the best three seamers in the world at the moment.”

Speaking to the media at the presentation ceremony, South African skipper Dean Elgar did not hide his disappointment at losing the series starter without putting on a fight. He said, “Obviously not a nice thing knowing we lost a Test here. Did a few things wrong. A lot of positives coming out that we can use in the next two.”

India and South Africa are now scheduled to play the second Test match, starting on January 3, at the Wanderers Cricket Stadium.