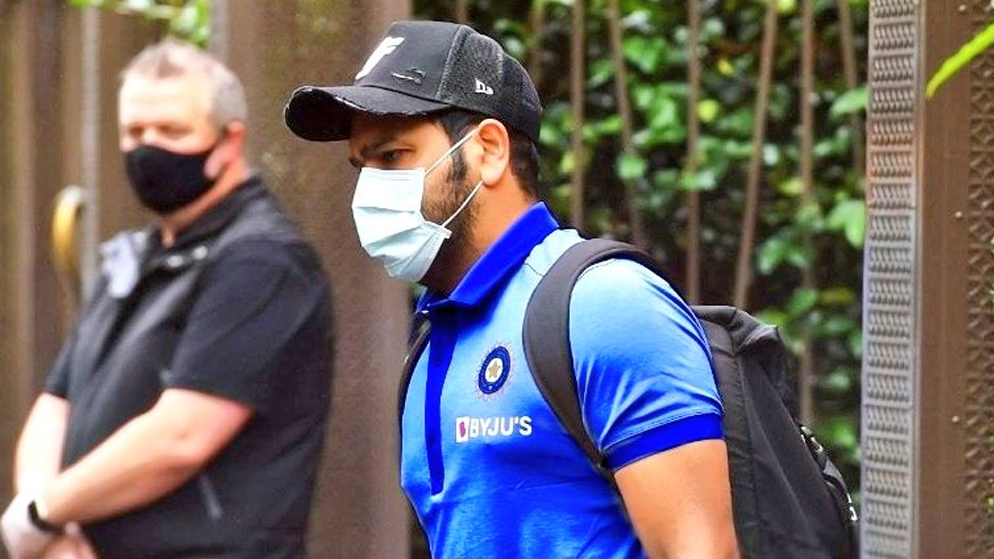 Fans of Indian cricket, and the Indian cricket team itself, have been dealt a major blow when it was reported that captain and opener Rohit Sharma would have to miss the currently ongoing Edgbaston test after testing positive for Covid-19 last Saturday. In his absence, Jasprit Bumrah has managed the side with great success so far but he is hoping he and his men can get the job done over the next two days and claim a memorable Test win.

India captain Rohit Sharma is finally out of isolation after testing negative for COVID-19 and will now be available for the white ball series against England, starting with the first T20I in Southampton on July 7.

The all-format captain Rohit Sharma, missed playing the rescheduled fifth Test against England as he tested positive on day two of the four-day warm-up match against Leicestershire.

“Yes, Rohit has tested negative and is now outside of quarantine as per medical protocols. However, he will not play today’s T20 warm-up match against Northamptonshire as he needs some recovery time and training for the first T20I,” a senior BCCI official told PTI.

As per medical protocol, every player outside of quarantine must undergo mandatory cardiovascular tests to monitor lung capacity and its function post-COVID-19.

The Indian team was keen to play with Rohit but he tested positive three times before matchday, which is why India had a new captain in Jasprit Bumrah.

Rohit had tested positive three times, forcing him out of testing, which began July 1. In his absence, Jasprit Bumrah leads the team.

While Rohit will now be available for all six subsequent white ball matches, Virat Kohli, Bumrah, Rishabh Pant, and Ravindra Jadeja – who are part of Test XI – will only join the second T20I as BCCI has two different rosters for the series von has named three matches to give the red-ball regulars some rest.

Indian cricket team captain Rohit Sharma has returned to netting sessions with the team after returning with negative Covid-19 results. PTI reported on Sunday that Rohit is not in isolation and, as per medical protocol; will undergo mandatory cardiovascular tests that are carried out to check a player’s lung capacity post-COVID-19. If approved, Rohit will begin preparations to lead India in a three-match T20I; followed by a three-match ODI series against England.

Rohit returned with positive Covid-19 results for the first time during India’s four-day tour match against Leicestershire. However, having returned to training; the Indian skipper will now look to hone his racquet skills for the 1st T20I on July 7 at the Ageas Bowl in Hampshire. The likes of Kohli, Jasprit Bumrah, Rishabh Pant, and Ravindra Jadeja are outfitted for the 1st T20I.

A video of Rohit posting his return is currently going viral on social media. He returned on July 1 with three positive Covid-19 results on the morning of day one between England and India in the ongoing 5th Test at Edgbaston, according to PTI. This forced team management to hand Bumrah over as team captain, who became India’s 36th Test captain.

Meanwhile, the Edgbaston test is scheduled to end on July 5. This match was scheduled to take place during the Indian England Tour in 2021, but a COVID outbreak at the Indian camp forced the boards to postpone the match. India leads the series 2-1 and looks forward to a 3-1 finish by winning the 5th Test.

Captain Jasprit Bumrah’s Performance in the absence of Rohit Sharma

In particular, Bumrah made headlines for hitting 29 runs in a single match against Stuart Broad as the bowler conceded 35 runs overall, with extras added. Broad’s over became the costliest in Test cricket history. At the same time, Bumrah overtook Caribbean legend Brian Lara in the list of players who scored the maximum number of runs in an over in red ball cricket. Meanwhile, he contributed the numbers 3/68 as England went all out in the second innings of the math with 284 runs.