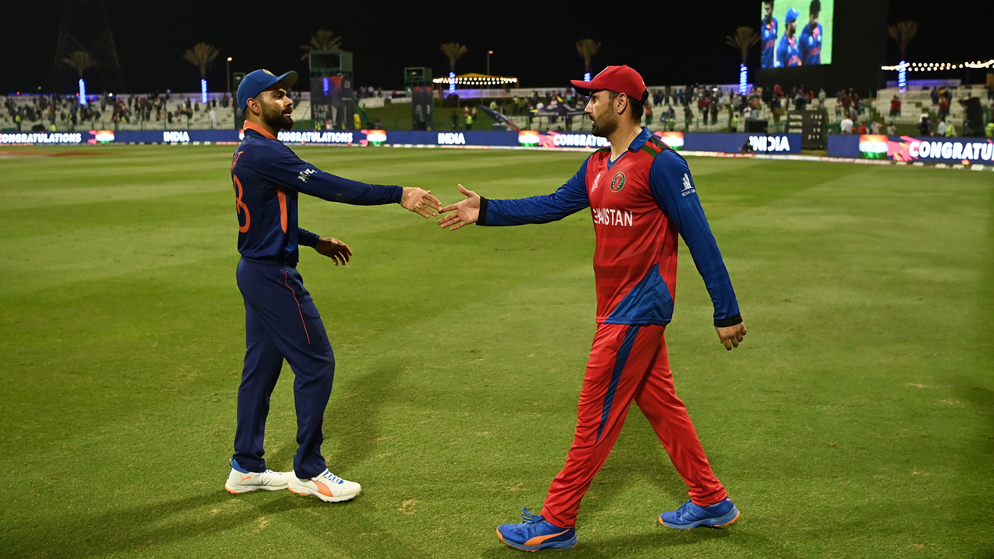 This was a long time coming, but India finally achieved its first victory in the T20 Cricket World Cup by completely taking apart an otherwise power-packed Afghan side. Chasing a mammoth target of 211 set by India, the Afghan batsmen could finish only at 144 with the loss of 7 wickets. This 66 run win puts India back in the race for a spot in the next round of the tournament.

Indian fans would now focus their attention on the match between New Zealand and Afghanistan, as an upset would make Team India favourites go through despite losing two games. Due to the big margin of victory, India’s net run rate has also improved dramatically and stands at +0.073. If at the end of all the Super 12 matches, teams end up with the same points, the NRR would determine the eventual qualifiers.

A Whirlwind Show By India’s Openers

It was an evening when nothing could go wrong for Indian batsmen. Rohit Sharma and K L Rahul dismantled the Afghan bowlers early on by recording a 140 run partnership for the 1st wicket. Sharma (74 off 47 deliveries) and Rahul (69 off 48 deliveries), built the platform for incoming Hardik Pandya (35* off 13 deliveries) and Rishabh Pant (27* off 13 deliveries), the latter two putting up a blistering show towards the end of the Indian innings. Except for Rashid Khan, no other Afghan bowler could put up resistance against the might of the Indian betters.

All Too Easy For The Bowling Department

A returning Ravichandran Ashwin made a grand comeback by picking up 2 wickets for 14 runs in his 4 overs. Mohammad Shami grabbed 3 wickets, the most among Indian bowlers. Along with Bumrah and Jadeja, these four made sure Afghanistan would not cause any trouble for India.

The Indian Captain had this to say during the post-match interview: “Much better cricket to be fair. We spoke about the fact that in the other games, if we just had two overs of free-flowing batting, then that sends a message to the opposition that we are going to put you under the pump. When we do that, we know how we can play. Sometimes, you do fall under the pressure and have to accept that. T20 cricket is a very instinctive game, in batting, bowling and decision-making. We do make decisions on the go.

The top three is mostly settled unless situations like today when the openers batted all the way through and the power-hitters were ready. We don’t always decide early to go hard, but we do back ourselves and when we do get going, we know what we can do. Well, yes that is the plan (to keep playing this way) but as I said, sometimes you just give in to the pressure. The other teams bowled really well to us. Yes, it (net run rate) was to be honest. We are always positive, and so we were thinking about it. The return of Ash is the biggest positive, we saw him doing well in the IPL and when he does this, we get control in the middle overs. That’s what I’m most pleased about today.”

Mohammad Nabi Confident Of Finishing On A High Against New Zealand

The Afghanistan skipper accepted the fact that India had outplayed and outmaneuvered them on every front. He bemoaned the lack of dew factor in the game since that was the primary reason he chose to field first. When asked what he felt about the game, Mohammad Nabi said, “India played really well, and put us under pressure. Not always, we try to rotate strike a bit too. Today we didn’t do well enough but we lost early wickets and that put us under pressure. Hopefully, we can win our last game.”

Rohit Sharma Sums Up The Mood In The Camp

While receiving his player of the match award, Rohit Sharma talked about his side’s overall game plan. He explained, “The idea was to go after it, and get off to a good start, which didn’t happen in the first two games and lay the platform for the others. Exceptional batting from Rahul and that partnership was vital. We were prepared to field first, and it was a good pitch to bat on. Getting to a respectable total was important, and the NRR could come into play so we had to win by a good margin, so glad we got that.”