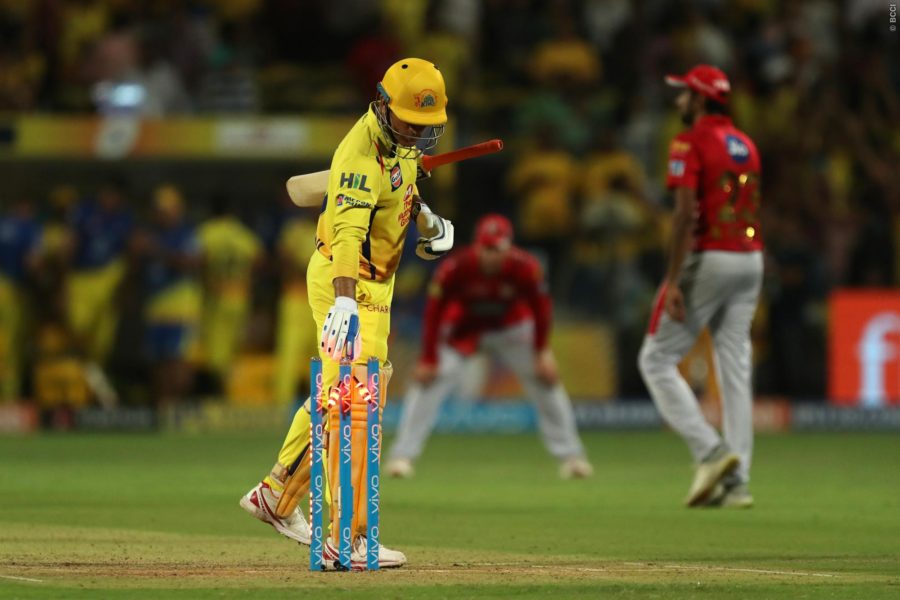 The Chennai Super Kings maintained their place among the top two teams in the VIVO IPL 2018 standings after they defeated Kings XI Punjab by five wickets at the MCA International Stadium in Pune on Sunday night. After opting to bowl and dismissing the visitors KXIP for 153, the hosts chased down the runs in 19.1 overs. The result dashed KXIP’s aspirations of progressing to the playoffs, at the same time confirming Rajasthan Royals’ passage to the next stage of the competition.

CSK were thoroughly tested at the start of their run-chase; the KXIP new ball bowlers hit their straps and got the ball to move around early on. CSK were 33-3 at the end of the powerplay and thereafter reaped the rewards of a tactical decision by the management. Harbhajan Singh was sent out to bat at number five, and Deepak Chahar at number six – possibly with a view to ensuring that they bat out the testing period of play. That move yielded the desired result as Harbhajan stitched together a 31-run partnership for the fourth wicket, and Chahar dominated the 56-run fifth wicket partnership; Raina playing second fiddle in both those stands.

After Chahar’s dismissal at the start of the seventeenth over, Raina who had been batting patiently until then, opened up; he collected two fours and two sixes off Andrew Tye in the nineteenth over, in the process also bringing up his half-century. At the start of the final over, MS Dhoni hit the ball out of the park to sign off the chase in signature style.

In the evening, on a surface which provided the quick bowlers plenty of assistance, Kings XI Punjab recovered from losing their top three in the first four overs, to eventually post 153. Manoj Tiwary (35) and David Miller (24) added 60 runs for the fourth wicket to put their team back on track. After they were dismissed in the space of six deliveries, Karun Nair took the attack to the home side, making an attractive half-century – his second of the season.

KXIP scored 29-3 and 73-2 in the first two periods of play, but lost 5 wickets for the addition of 51 runs in the final five overs.

For CSK, while Ngidi did the bulk of the damage in one of the top spells of the season, Shardul Thakur and Dwayne Bravo chipped in with two wickets apiece. Ravindra Jadeja and Deepak Chahar chipped in with a wicket each.

The move to promote Deepak Chahar, turned out to be a masterstroke. Where top-order batsmen struggled in the middle, Chahar looked extremely comfortable with the bat in hand. The 25-year old applied well early on, collecting singles and on the odd occasion stealing a second run. It was in the fifteenth over that he decided to switch gears; he picked on Ravichandran Ashwin and hit him for two sixes and a four. In the following over, the left-arm spinner Axar Patel was deposited into the stands over long-off. Chahar was dismissed by Ashwin in the following over, but his 20-ball 39 (which contained one four & 3 sixes) had done the job for CSK.

Karun Nair’s 54 was the stand out performance in the KXIP innings. The 26-year old, back in the KXIP line-up, started with three singles of the first six balls he faced. He broke the shackles when he slog-swept Ravindra Jadeja into the stands in the fourteenth over. In the fifteenth, he made room and sent a Dwayne Bravo delivery into the stands at long-off.

Karun then collected 14 off Shardul Thakur in the seventeenth over; he hit a four (through cover), six (over square-leg) and collected a boundary through the slip-cordon off the last ball of the over. In the nineteenth over, Bravo was at the receiving end yet again; he improvised second ball and collected a boundary through point, slog-swept a length delivery over fine-leg, and then hit a flat six over long-on to bring up his half-century. The impact of Karun’s innings can be established from the fact that he scored 54 of the 74 runs which were scored while he was at the crease.

When the conditions were demanding, it is experience that teaches you how to ride the difficult periods of play. The CSK left-hander illustrated that; he focussed on taking the singles to survive the difficult periods of play, and then when he was confident, stepped on the accelerator. Raina was 39 from 42 balls – and did not hit a boundary for a period of about 35 deliveries – before he collected two fours and two sixes right at the end. Raina brought up his half-century off 45 balls, and carried on to finish unbeaten on 61.

Lungi Ngidi demolished the KXIP batting line-up with a sensational spell of fast bowling. The lanky CSK pacer bowled quick, got the ball to swing and skid off the surface, and hit the bat high at times. He struck two big blows in his first two overs; after strangling Chris Gayle down the leg-side with his second delivery, he produced a ripper – one that pitched outside off and swung back in sharply – to castle the in-form KL Rahul (who was set up with an away-going delivery the previous ball).

In his final over – the 18th of the innings – he found the thinnest edge of Ravichandran Ashwin’s bat and then had Andrew Tye caught at mid-off. Ngidi finished with figures of 4-1-10-4; his spell should rank among the most memorable spells of the season.

When it was KXIP’s turn to bowl, Ankit Rajpoot tested the Chennai Super Kings batsmen thoroughly. He got the ball to move around and beat the bat on numerous occasions, but was only successful in picking up two wickets. In his third over – fifth of the innings, he found the outside edge of Faf du Plessis’ bat and Chris Gayle completed a low catch at first slip. The very next ball, he produced a ripper – one that beat the outside edge of Sam Billings’ and crashed into the off-stump behind him. Rajpoot would be bowled out within seven overs; his spell of 4-1-19-2 contained 19 dot deliveries.