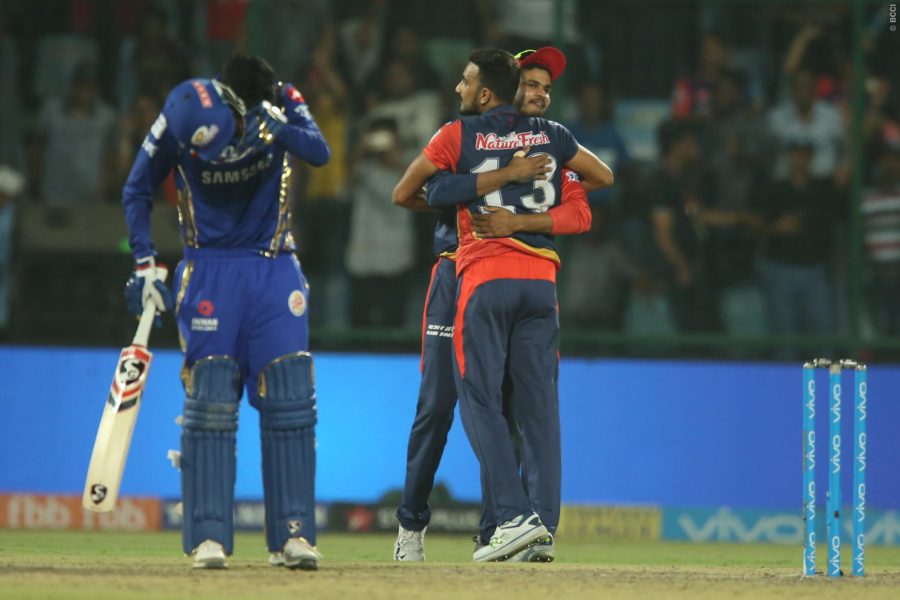 The Delhi Daredevils eliminated the Mumbai Indians from the race to the VIVO IPL 2018 Playoffs after they defeated the defending champions by 11 runs at the Feroz Shah Kotla ground in Delhi on Sunday evening. In the penultimate league fixture of the season, the Daredevils posted 174-4 and then bowled out the visitors for 163.

The Daredevils, who had opted to bat, lost two wickets in the first five overs; Prithvi Shaw’s lack of game awareness cost him his wicket – run out at the non-striker’s end, and Glenn Maxwell attempted a big hit off JaspritBumrah only to drag the ball back onto his stumps. Shreyas Iyer too perished for a single-digit score. Rishabh Pant (64) cashed in on his purple patch, scored yet another half-century – his sixth such score this season. Vijay Shankar, who walked out to bat at the start of the tenth over, made a useful contribution; he made 43 from 30 balls and powered DD to a competitive total. Pant and Shankar were involved in a 64-run partnership – the highest of the innings.

DD were 46-2 at the end of the powerplay, added 74 runs in the middle overs, and finished with a flourish – adding 54 in the final five overs.

MI got off to a strong start with Suryakumar Yadav collecting a four and a six off the first two balls of the run-chase. But after he holed out off the fourth delivery of the innings, Evin Lewis took the attack to the hosts; the Trinidadian dominated the 45-run second-wicket stand, which ended when Ishan Kishan was dismissed at the start of the seventh over.

Lewis carried on to make 48 – his 31-ball knock containing 3 fours and 4 sixes – before he stepped out to Amit Mishra, was foxed by the googly and was stumped. That dismissal led to a mini collapse; Kieron Pollard and Krunal Pandya were dismissed in the next over bowled by Sandeep Lamichhane. MI needed one of Rohit Sharma or Hardik Pandya to bat deep and see them through; but their partnership was terminated at 43, and they were both dismissed in the fourteenth and fifteenth over respectively, leaving the lower order too much to do. Ben Cutting’s late charge briefly revived MI’s hopes; the Australian scored 15 runs off the 18th over bowled by Liam Plunkett. But a fantastic 19th over bowled by Trent Boult, and Cutting’s dismissal early in the 20th over, meant MI would finish 12 short.

For the Daredevils, the two leg-spinners did the bulk of the damage; Mishra and Lamichhane picked up 6 of the top 7 wickets and returned combined figures of 8-0-55-6. A mention has to be made about the Daredevils’ fielding and catching; while they were scrappy on the field, there were also three excellent catches taken in the outfield. Vijay Shankar took a good catch at long-on to dismiss Ishan Kishan, while Glenn Maxwell and Trent Boult combined in two tag-team efforts to dismiss Kieron Pollard and Rohit.

Rishabh Pant was in the belligerent mood once again. He hit 4 fours and as many sixes in his 44-ball outing. The Daredevils wicketkeeper favoured the leg-side – scoring three sixes and a boundary in that region. The two stand-out hits in his knock were the one-handed six over midwicket and the reverse ramp over third man for a six.

Pant got to his half-century off 34 balls, and went on to make 64; his innings ended in the seventeenth over when he attempted to hit the left-arm spinner Krunal Pandya out of the ground, but picked the man at the long-on.

Vijay Shankar hit the first-ball boundary but then settled down to play a responsible inning. The right-hander collected several singles in his innings – interspersed with the occasional boundary or hit over the fence; he ran 19 singles, hit three boundaries and two sixes in his 30-ball 43.

Amit Mishra and Sandeep Lamichhane, who had derailed CSK in the previous match,were outstanding once again. The leg-spinners mixed up the leg-breaks and googlies, and picked up three wickets each. Lamichhane recovered from the punishment he received early on, while Mishra conceded only one boundary his four-over spell. They bowled a total of 23 dot deliveries in their eight overs.

After Liam Plunkett had conceded 15 in the eighteenth over, the momentum was with MI; the visitors needed 23 off the final two overs. That’s when Trent Boult bowled a sensational 19thover. To Cutting, he bowled from over the stumps, angling the ball away in search of the wide yorker; Cutting managed 4 runs from three balls. To the batsman at the other end, Boult bowled from round the stumps in an attempt to cramp the batsman; he succeeded, hitting timber of the last ball of the over. After the 5-run over, MI were left needing to score 18 off the final over.