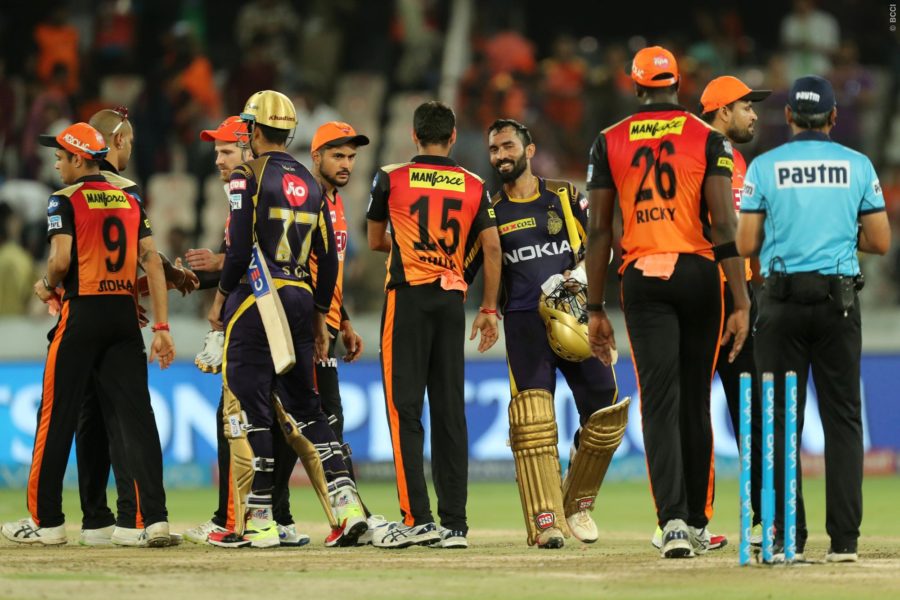 The Kolkata Knight Riders became the third team to secure a playoff berth in VIVO IPL 2018 after they defeated the table toppers Sunrisers Hyderabad in their final league stage match of the season. At the Rajiv Gandhi International Cricket Stadium in Hyderabad, the Sunrisers opted to bat and posted 172-9. The Knight Riders chased down the runs in 19.4 overs, winning the match by 5 wickets.

In the evening, the Sunrisers were in an excellent position after 15 overs, but their innings collapsed in the last five overs. SRH were 141-2 after 15 overs but only managed to add 31 runs in the last five overs, while also losing 7 wickets in that period. Everyone in the Sunrisers top order contributed; Shikhar Dhawan top-scored with 50 (39 balls), while his opening partner Shreevats Goswami made 35 (26 balls). Kane Williamson made a breezy 36 (17 balls), while Manish Pandey made 25 from 22 balls. The opening pair added 79 runs and the second wicket pair added 48 runs; there was very little else in terms of partnerships.

For KKR, Prasidh Krishna returned the most successful bowler with figures of 4-30; the pacer triggered SRH’s collapse with the dismissal of Dhawan, and then picked up three wickets in the final over of the innings. Sunil Narine finished with respectable figures of 1-23.

The Knight Riders’ chase was set up by Narine, who blasted 29 from 10 balls and dominated a 52-run opening partnership. Chris Lynn and Robin Uthappa then stitched a 67-run partnership that further firmed KKR’s grip on the chase. After both the well-set batsmen were dismissed, Dinesh Karthik (26* from 22 balls) steered his team past the finish line.

For Sunrisers, the wickets were shared between the birthday boy Siddarth Kaul (2-26), Carlos Brathwaite (2-21) and Shakib Al Hasan (1-30). Rashid Khan bowled well and kept the pressure at his end, but didn’t have much luck in terms of wickets.

Sunil Narine set the tempo for KKR’s chase with a 9-ball blitz; the Trinidadian struck three consecutive boundaries and a six in the second over to get the chase on the rolls. He added a boundary and a six in the fourth over before a miscue landed down the throat of long-off.

At the other end, Chris Lynn started positively too; he was fluent and forceful against the pacers but played out the spinners cautiously. The Australian collected a flurry of boundaries early on, and thereafter when the required run rate was under control, operated in singles. 22 of his first 25 runs were through hits to or over the fence, 13 of his next 19 runs were through singles. Lynn brought up his half-century in style; he deposited Sandeep Sharma with a fierce pull into the square-leg boundary. Shortly thereafter, he was caught at long-on. Lynn made 55; he hit 4 fours and 3 sixes in his 43-ball knock.

Robin Uthappa once again hit the ball sweetly before falling prey to the short ball. The KKR number three cut well, drove the ball fluently and looked comfortable at the crease before he top-edged a pull shot to be caught by the wicket-keeper. Uthappa dropped on 11, made 45 from 34 balls; he hit 4 fours and 2 sixes.