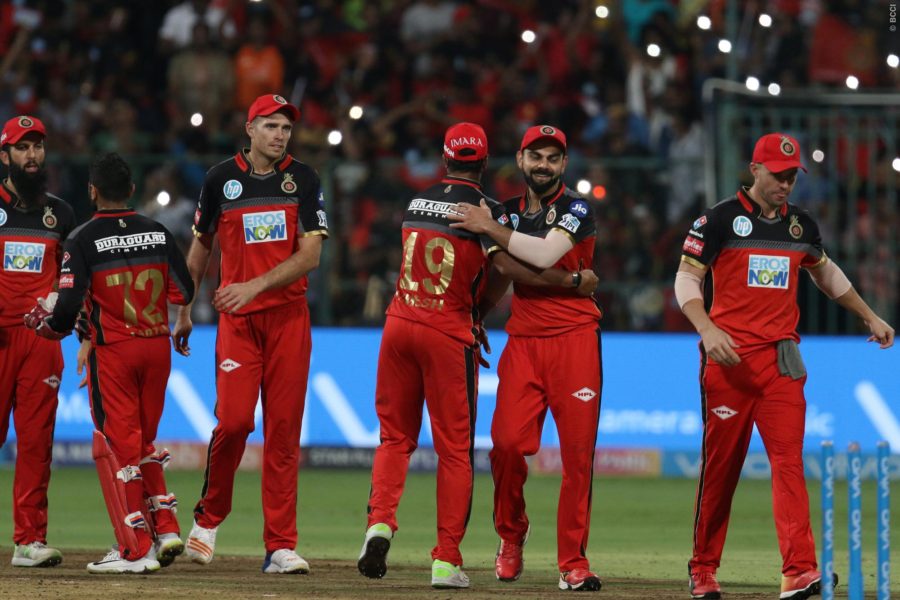 The Royal Challengers Bangalore kept themselves alive in the race to the VIVO IPL 2018 Playoffs after they defeated Sunrisers Hyderabad by 14 runs in a run-feast at the M Chinnaswamy Stadium on Thursday night. RCB scored 218-6 after being given the chance to set a target. SRH fell short in their chase; Kane Williamson’s classy 81 and Manish Pandey’s 62* could only take them to 204-3.

In the evening, the Sunrisers bowlers were at the receiving end of an outrageous assault from the RCB batsmen. Having opted to field first, SRH made a steady start; Sandeep Sharma dismissed Parthiv Patel in the first over and Rashid Khan dismissed Virat Kohli (12) in the fifth over. AB de Villiers and Moeen Ali then took control of proceedings and put the SRH bowlers to the sword; de Villiers would go on to score his fifth half-century of the season, while Moeen Ali, playing his first home game for RCB, scored his first IPL half-century. The third-wicket pair added 107 runs in 9.3 overs and lifted RCB to 145.

The finishing touches were applied by Colin de Grandhomme (40 from 17 balls) and Sarfaraz Khan (22* from 8 balls); they added 34 runs in the 2.1 overs they were together at the crease. 44-2 at the end of the first six overs, RCB added 105 in the middle nine overs and added a further 69 runs in the last five overs.

For the Sunrisers, Rashid Khan (3-27) was the most impressive bowler, while Sandeep Sharma (1-40) and Siddarth Kaul (2-44) shared the rest of the spoils. Basil Thampi, who replaced the injured Bhuvneshwar Kumar in the XI, had a disastrous outing; the Kerala pacer went for 70 runs in his four overs – the most expensive spell bowled by an Indian in T20 cricket.

In their run-chase, the Sunrisers’ got off to a solid start with their openers Alex Hales and Shikhar Dhawan adding 47. Once they were dismissed, it was left to Kane Williamson to pilot the chase. The SRH captain found an able partner in Manish Pandey, and the duo stitched together a 135-run partnership that kept their team in the hunt. SRH needed 49 off the last three overs, which came down to 35 off the last two and 20 off the final over. Williamson was dismissed off the first ball of the final over, and Manish Pandey and Deepak Hooda could thereafter only add five.

For RCB, Yuzvendra Chahal was the best bowler; where the rest of his teammates were taken to the cleaners, the leg-spinner returned impressive figures of 1-28. Mohammed Siraj, who bowled a very good twentieth over, and Moeen Ali picked up a wicket each.

It has to be documented that both sides grassed several chances in the field; at least seven catches were put down in the match (including two by Virat Kohli). But, Rashid Khan and AB de Villiers took two sensational catches which would feature among the best in the competition; Rashid’s one-handed effort ended de Grandhomme’s vigil, while de Villiers’ one-handed leaping catch resulted in the dismissal of Alex Hales.

There were two very different half-centuries in the RCB innings. de Villiers’ 39-ball 69 was a dazzling effort – replete with stunning strokes, lightning footwork, and bat speed. The South African took a little while to gauge the conditions; but once he got a hang of the surface, the bowlers had no answers. When the balls were quicker in pace, he played the drives, cuts and pulls and found the gap. When the bowlers denied him the pace, he created the pace himself with his footwork and bat swing. The stand out shot of his innings was the 105-meter six over square-leg off Basil Thampi; on that occasion, he walked across to the off-side, got down low on his knees, and scooped the low full toss onto the roof of the stadium. In all de Villiers hit 12 fours and a six.

Moeen Ali, promoted to number four, made an equally fluent and important half-century; his 34-ball 65 was without the awe that comes with a de Villiers knock. Moeen’s knock was all about holding his shape and striking the ball neat; the left-hander predominantly targeted the straight boundary or the midwicket area; he struck 2 fours and 6 sixes during his stay at the crease.

Kane Williamson’s 81 would have to go down as among the finest T20 innings. Despite the demanding required rate, the Sunrisers captain never once appeared hurried or under pressure at the crease. He executed the pull shot and slog sweeps well; he hit four sixes over midwicket and deposited one into the stands at square-leg. When there was width on offer, he did not hesitate in throwing his bat at the ball. Williamson brought up his half-century off 28 balls and carried on to make 81 before he was caught on the fine-leg boundary. The 27-year old hit 7 fours and 5 sixes in his 42-ball outing.

After both the half-centurions were dismissed in the same over – 15th over of the innings – RCB needed someone who could keep the foot on the accelerator. Colin de Grandhomme and Sarfaraz Khan answered that call. While the former’s knock was all about muscle, power and pouncing on length, the latter collected boundaries predominantly behind-the-wicket. de Grandhomme hit one boundary and four sixes in his 17-ball outing, while Sarfaraz collected three boundaries and a six in his 8-ball knock.

Rashid Khan was Sunrisers’ best bowler. The Afghanistan leg-spinner returned figures of 3-27 from his four overs; his victims in the match were Virat Kohli (castled with a googly), and de Villiers and Moeen Ali, who were dismissed in the same over.

Stat of the match

The two teams together scored 422 runs in this contest, making this the highest-scoring IPL match at the M Chinnaswamy Stadium in Bengaluru.