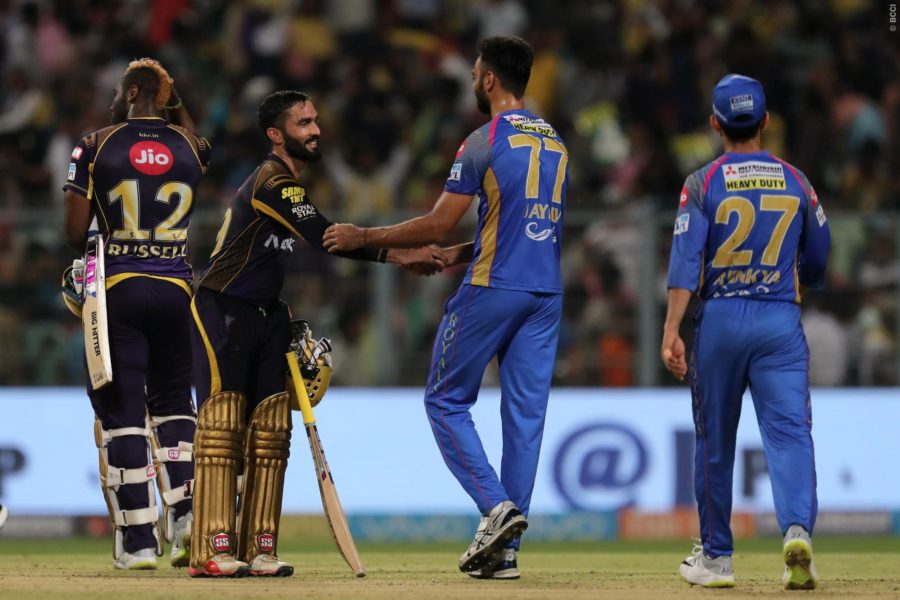 The Kolkata Knight Riders ended their home campaign in VIVO IPL 2018 on a happy note when they defeated the Rajasthan Royals by 6 wickets in Match 49. After opting to bowl on a relatively pleasant Tuesday night, KKR were in for a shock as the Rajasthan Royals got off to a fiery start. But the KKR spinners helped pull things back, and Sunil Narine and Kuldeep Yadav picked up 5 wickets between them to first derail the Royals innings and hasten their dismissal. KKR bowled out the Royals for 142 and then chased down the runs quite comfortably, winning in 18 overs.

The Rajasthan Royals innings was of three parts. They scored two runs off the first over, added 57 runs in the next three overs, and lost their way completely thereafter. Jos Buttler and Rahul Tripathi – the Royals’ seventh different opening pair this season – flayed the KKR quicks early on and caused plenty of damage; 19 runs were scored in the second over, 28 in the third and 10 in the fourth. What followed was simply unfathomable; from 63 for no loss, the Royals lost all ten wickets for the addition of 79 runs in a period of 14.1 overs. Jaydev Unadkat, batting at number eight delayed the fold up briefly; he scored 26 from 18 balls before becoming the last man to be dismissed. The Rajasthan Royals were skittled out for 142 in 19 overs.

Credit to the KKR bowlers for clawing their way back into the contest. Once they found the opening they needed, the bowlers applied the squeeze and built pressure. Between overs 6 & 14, KKR only conceded 44 runs. Between overs 8 & 14, barring one over, they picked up a wicket in every over. Kuldeep Yadav was the wrecker-in-chief while Andre Russell provided the initial breakthrough and kept the runs down; the rest of the bowlers did their bit.

KKR’s reply was dramatic. Sunil Narine collected two sixes and two fours off the first four balls of the chase before he was dismissed early in the next over. The runs dried up briefly, and even though the Royals bowlers picked up wickets every now and then, opener Chris Lynn (45) batted deep into the chase ensuring one set batsman was in the middle. Captain Dinesh Karthik came out to bat at five, scored a quick-fire 41 and helped finish the chase.

Chris Lynn’s 45 was the top-score of the match. It wasn’t the typical blazing innings one is used to seeing from the Australian, but a very important knock for his team. Knowing the target in front of his team wasn’t too demanding, the KKR opener was prepared to bide his time; he batted patiently against the spinners, and took the toll against the quicks. He opened his account with a flurry of boundaries, but then went 18 deliveries without finding the fence; he focused on singles, strike-rotation and building partnerships. Lynn was dismissed in the sixteenth over – with his team 26 runs away; he made 45 from 42 balls and hit five boundaries and a six.

Jos Buttler extended his fine form and helped himself to 39 from 22 balls. When there was the width, he played the cut and found the gap through point. When the ball was full, he drove fluently through the off-side. When they were straight, he played the scoop to collect sixes over fine-leg. The Englishman was particularly severe on the young bowler Shivam Mavi, whom he hit for 4, 6, 4, 4, 6, 4 in the third over of the innings. The RR opener was dismissed in the tenth over – just after the strategic timeout – when he attempted a reverse sweep but picked the point fielder; his knock contained five fours and two sixes.

After Andre Russell gave KKR the opening they needed, Kuldeep Yadav imposed himself on RR and ended with figures of 4-0-20-4. The wrist spinner was outstanding on the night; he got the ball to turn both ways, changed his pace well too, and picked up key wickets. His first scalp was that of Rahane, who didn’t connect while attempting a reverse sweep and lost his stumps. The well-set Buttler’s reverse sweep off a seam-up delivery found the point fielder, Stuart Binny was outfoxed by a brilliant wrong ‘un to be stumped, and Ben Stokes’s leading edge carried back to the bowler.

Ben Stokes was the Rajasthan Royals’ best bowler in the match. The Royals needed someone to step up and bowl a tight spell first up, and the Englishman answered the call. He bowled a three-over spell in the powerplay – in which he dismissed Sunil Narine and Robin Uthappa. Stokes returned to bowl the 16th over and added to his tally the wicket Chris Lynn, to eventually finish with figures of 4-1-15-3.

It was Andre Russell who gave KKR the opening they so desperately needed. The Rajasthan Royals openers had got off to a rollicking start when Russell, given the ball in the fifth over, made an instant impact; he had Rahul Tripathi caught behind the fifth ball, and that started the derailment of the RR innings. The Jamaican bowled three tidy overs and finished with figures of 2-13 – the other wicket being that of Jofra Archer in the eighteenth over. Russell would be the only bowler in the match to not concede a single boundary.