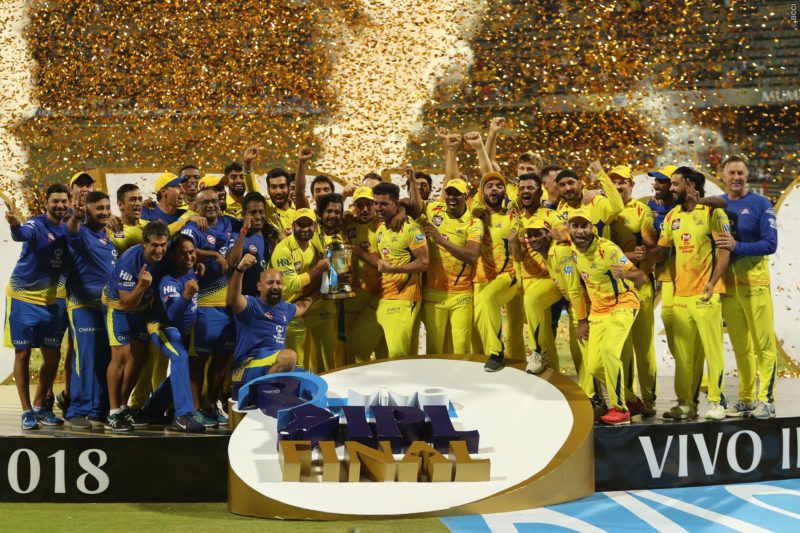 The Chennai Super Kings defeated Sunrisers Hyderabad by 8 wickets on Sunday night to clinch their third Indian Premier League title. In the VIVO IPL 2018 Final played at the Wankhede Stadium, Shane Watson’s belligerent hundred powered CSK’s chaseof 179; the Australian remained unbeaten on 117 and watched from the non-striker’s end as Ambati Rayudu drilled one through covers for the winning boundary. CSK cruised past the finish line with nine balls to spare.

Watson’s innings was of two contrasting parts. Opening the innings, he struggled to get the ball off the square early on. However, once he got into hitting mode, there was no stopping him. He absolutely pummelled the Sunrisers bowlers, helped himself to a score of 117 and saw his team home. Watson hit 11 fours and 8 sixes in his 57-ball outing. The other useful contribution for CSK came from Suresh Raina, who made 32 from 24 balls, and hit three fours and a six; the left-hander was involved in a 117-run second-wicket partnership with Watson that put CSK on course for a successful chase.

The Sunrisers bowlers tried their best, but it was one of those days where they had no answers to Watson’s onslaught. Bhuvneshwar Kumar and Rashid Khan were outstanding, returning combined figures of 8-2-41-0. Crucially for SRH, the wickets column remained empty for both bowlers.

In the evening, put in to bat, Sunrisers Hyderabad got to 178-6 riding on useful contributions from almost all their batsmen. Captain Kane Williamson would be SRH’s top-scorer yet again – for the seventh time this season, while Shakib-al-Hasan, Yusuf Pathan and Carlos Brathwaite made brisk scores of 23, 45* and 21 respectively. The 51-run stand between Shikhar Dhawan and Williamson for the second wicket would be the biggest partnership in the SRH innings. The Sunrisers scored 42-1 in the powerplay and added 84 (for the loss of two wickets) in the middle overs, before finishing with a flourish; they added 52 in the final five overs.

For CSK, five bowlers picked up one wicket each. Deepak Chahar and Lungi Ngidi were the most impressive.

The innings of the match was played by Shane Watson. The CSK opener did not open his account until he had played ten balls. But once the swing disappeared, the 36-year old turned a different batsman altogether. He steadily switched gears, caught up to a run-a-ball 19, brought up his half-century off 33 balls and then raced to his century 18 balls later. In the middle part of his innings, he found the boundary regularly; pace and spin were treated with equal disdain. He favoured the leg-side and hit all his eight sixes on that side of the ground.

Watson plundered 27 runs in one particular over – the 13th of the innings bowled by Sandeep Sharma – which would be the most expensive over in IPL Finals. He hit the pacer for a boundary second ball, then collected a hat-trick of sixes, before completing the over with another boundary. Prior to that over, CSK’s required run-rate was 9.38; following that assault, the required run-rate had plummeted to 6.86.

Watson brought up his hundred off Rashid Khan in the seventeenth over; he dropped the ball in the gap on the off-side and ran across to complete a well-deserved hundred – his fourth in the IPL.

Earlier, it wasn’t surprising that Kane Williamson was yet again the Sunrisers’ top-scorer. The SRH captain walked out to bat in the second over and operated in first gear early on. He scored 18 off the first 19 balls he faced (which included a top-edged six and four), but then stepped up the ante, scoring 29 off the next 17 balls. The Kiwi batsman was severe on Dwayne Bravo in particularly; he read the Trinidadian very early, got into position early and hit him for 3 fours and a six.

Yusuf Pathan (45 not out) walked out to bat after his captain was dismissed in the thirteenth over. He opened his account with a boundary – playing a deft late cut that found the gap in the infield. He batted smartly thereafter, focusing primarily on singles but only not letting go any poor deliveries. Whenever there was width on offer, or when the ball was pitched short, he pounced on it and collected boundaries; he hit 4 fours and 2 sixes in his 25-ball knock. Unfortunately for SRH, Yusuf didn’t get too much of the strike at the end; he only got to face 7 balls in the last three overs.

Lungi Ngidi returned excellent figures of 1 for 26. Early on, in the fourth over of the match, he bowled a maiden over to the best batsman in the tournament – Kane Williamson. Later on, he bowled a very good 19th over; bowling different lengths and different speeds, he conceded only two singles off the first five balls, but a mishit by Brathwaite landed in the stands at long-on to spoil what would have been an outstanding over.

The occasion of the Final perhaps got to Deepak Chahar, as the pacer bowled a waist-high full toss first ball of the match. But the 25-year old recovered quickly and bowled a tidy spell thereafter. He had bowled out at the halfway stage, finishing with figures of 4-0-25-0. Chahar’s economy rate of 6.25 was the best among all the CSK bowlers.

Bhuvneshwar Kumar bowled three sensational overs at the start of the CSK innings. He bowled a peach of an outswinger first ball to beat Shane Watson’s bat and followed it up with five dot balls to walk away with a maiden over. The pacer continued to pile up the pressure in his following over too; the only runs he conceded in that over were the 5 runs conceded through overthrows – courtesy an unnecessary shy at the stumps by Deepak Hooda. He conceded only four singles in his third over – at which point he was taken off the attack and saved for later. His first spell figures read: 3-1-9-0.

Chennai Super Kings scored 111 runs in the middle 9 overs – the most any team has scored in that period of play in VIVO IPL 2018.

Shane Watson’s score – 117 – would be the highest score by a batsman in an IPL Final.