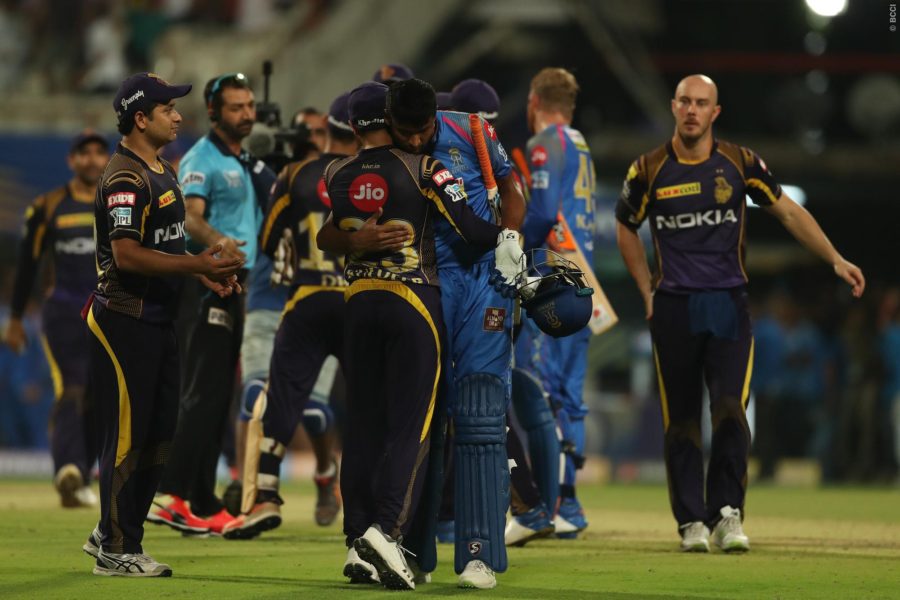 The Kolkata Knight Riders took a step closer to the VIVO IPL 2018 Finals after they defeated the Rajasthan Royals by 25 runs in the Eliminator played at the Eden Gardens on Wednesday evening. Put in to bat, KKR recovered from a poor start to post 169-7. The Royals were in control of their chase for the most part, but the dismissals of the two well-set batsmen –Ajinkya Rahane and Sanju Samson – came at a wrong time; the Royals would finish at 144-4.

Earlier in the evening, after losing Sunil Narine to the second ball of the match and slipping to 51-4 a little while later, KKR recovered through captain Dinesh Karthik’s half-century, his 51-run partnership with Shubman Gill (28), and an end-innings blitz from Andre Russell to get to 169-7. KKR, 46-3 at the end of powerplay, added 68 runs in the middle period and finished with a flourish, adding 55 runs in the final five overs.

For the Royals, their spin trio were outstanding. On a pitch that offered grip and turn, K Gowtham and Ish Sodhi finished with economy rates of 5.00 and 3.75 respectively. The third spinner in the RR ranks – Shreyas Gopal – bowled wonderfully too and dismissed Chris Lynn, before he was taken for 20 runs in his final over; the leg-spinner returned figures of 1-34. Ben Laughlin and Jofra Archer chipped in with two wickets each.JaydevUnadkat had yet another forgettable outing; the left-arm spinner bowled only two overs in which he conceded 33 runs.

The Royals had the perfect platform for their chase; openers Rahane and Rahul Tripathi (20 from 13 balls) added 47 in five overs before the latter was dismissed. Rahane (46 from 41 balls) and Samson (50 from 38 balls) then added 62 runs for the second wicket; while Rahane did the holding job, Samson played yet another attractive innings. Their partnership was broken when Rahane was dismissed first ball after the batting timeout; the RR captain attempted to sweep a full delivery, but the ball came off the toe of the bat and lobbed back to the bowler Kuldeep Yadav. Samson played a few elegant strokes, but perished in the seventeenth over – soon after he had brought up his half-century. RR never recovered from the dismissals of the two well-set batsmen and would finish short.

Despite walking out to bat in the fourth over, with his side in a spot of bother, Dinesh Karthik was full of positivity. The KKR skipper hit three boundaries in the first five balls he faced – one through fine-leg and two fluent drives through the off-side. He then settled down for the long haul and kept the scoreboard ticking. In the fourteenth over, he collected a six off the leg-spinner Shreyas Gopal, and then brought up his half-century with a top-edged six off Unadkat. Karthik was dismissed at the start of the eighteenth over; he made 52 and his 38-ball knock contained 4 fours and 2 sixes.

Russell played out three dot balls at the start of his innings – the third ball he faced was called No Ball for being the second short-pitched delivery of the over. The following delivery would be a free-hit, which the Jamaican gleefully dismissed deep into the stands at long-on. He dealt in boundaries thereafter; Unadkat was hit for a four and six off consecutive deliveries, Laughlin was deposited into the stands twice in the eighteenth over, and a miscue off Archer sailed over long-off too. In the twentieth over, Russell collected two boundaries off Laughlin. He eventually finished unbeaten on 49 and his knock contained three fours and five sixes.

The shot of Russell’s innings was the tennis forehand-like stroke to a back-of-the-hand slower delivery from Archer that sailed into the player’s area at long-off.

Dinesh Karthik trusted his spinners, and they did not let him down on the day. Piyush Chawla and Kuldeep Yadav provided KKR timely breakthroughs. Chawla (4-0-24-2) broke a blossoming opening stand in the sixth over; he deceived Rahul Tripathi with a googly and moved swiftly to his right to take a one-handed return catch. In his final over – the 17th of the innings, he accounted for the wicket of Samson, who pulled a short delivery but was beaten for pace and picked out long-on.

Kuldeep Yadav returned sensational figures of 4-0-18-1; the left-arm wrist spinner bowled 13 dot balls in his spell and dismissed Rahane at a crucial juncture in the chase.

In the evening, the RR spinners made good use of the assistance the surface provided them. K Gowtham, who bowled all his three overs in the powerplay, stuck to a wicket-to-wicket line and accounted for the scalps of Sunil Narine (stumped second ball of the match) and Robin Uthappa (caught off the leading edge). The off-spinner bowled ten dot balls in his spell, and returned figures of 3-0-15-2.

Ish Sodhi returned exceptional figures of 4-0-15-0. The Kiwi leg-spinner was utilised in three spells; he bowled overs 7 and 9, and then returned to bowl overs 13 and 16. Sodhi bowled half the quota of his spell to Karthik, yet only conceded 8 runs.

Shreyas Gopal bowled three excellent overs – hitting a particular area on the pitch consistently, before a 20-run final over ruined his figures; the leg-spinner from Bengaluru deceived Chris Lynn and held on to a return catch in his first over. He conceded 11 runs in his second and third overs, before Shubman Gill and Karthik took toll in his final over.

The KKR quicks had come in for plenty for tap right through the season, but they stepped up in this do-or-die match. Russell conceded only 22 runs in 3 overs, while Prasidh Krishna returned figures of 1-28 from his four overs. The latter bowled a fantastic 18th over in which he conceded only 3 runs. At the start of the over, RR had to get 43 from 18 balls. But young Prasidh smartly mixed up the yorkers and short deliveries, and completed the over with a slower full toss, which Stuart Binny pulled to the fielder at square-leg.