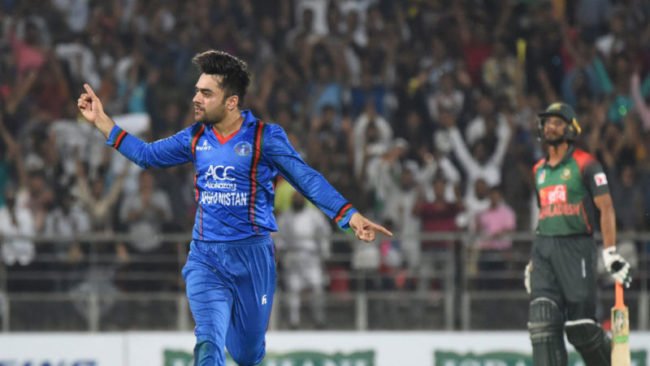 Rashid Khan and inability of Bangladesh batsmen. These were the major factors responsible for sealing the fate of the three-T20 series in favour of Afghanistan with the last match still to be played.

On Thursday, while two of Bangladesh’s senior batsmen came good, the in-form leggie continued to cast doom on Bangladesh to help Afghanistan complete the series whitewash.

Scorecard and As it Happened

Thanks to Shafiqullah’s sensational save on the boundary off the last ball, Rashid managed to defend nine runs off the last over to leave Bangladesh agonisingly one run short of Afghanistan’s total of 145 for six at the Rajiv Gandhi International Stadium. The last-ball thriller was a perfect way to end the series for the spectators who continued to throng the stadium even for an inconsequential game.

With Mahmudullah and Mushfiqur Rahim deciding to take the game deep after hara-kiri while running between the wickets had left Bangladesh reeling at 60 for four at the half-way stage, Afghanistan skipper Asghar Stanikzaisaved Rashid to bowl the 16th, 18th and the 20th over. However, the ploy almost backfired with Mushfiqur taking Karim Janat to cleaners in the penultimate over.

With 30 runs required off the last two overs, the diminutive batsman, scoring below a run-a-ball till then, creamed five fours off the first five balls before ending the over with a single. With nine runs to defend, Rashid started off by forcing Mushfiqur to hole out to deep mid-wicket off the first ball.

With Mahmudullah and Ariful Haque unable to get a boundary for the next four balls, Afghanistan surged ahead with four required off the last ball.

Ariful finally timed a lofted on-drive to perfection but Shafiqullah ran to his left and first thumped the ball into the field, then tapped the ball back in the field before getting up and throwing to the ‘keeper’s end to leave Mahmudullah short of his quest to complete the third run and enforce a Super Over.

Earlier in the night, Bangladesh managed to restrict Afghanistan to 145 for six, thanks to immaculate spells by left-arm spin twins Shakib Al Hasan and Nazmul Hussain. After the pace bowlers suffered heavily at the death in the first two games, Bangladesh captain Shakib saved himself and Nazmul for the last two overs. The ploy worked and ensured Bangladesh didn’t have to chase to a 160-plus pitch on a sluggish pitch. In the end, even that wasn’t enough to see it home.