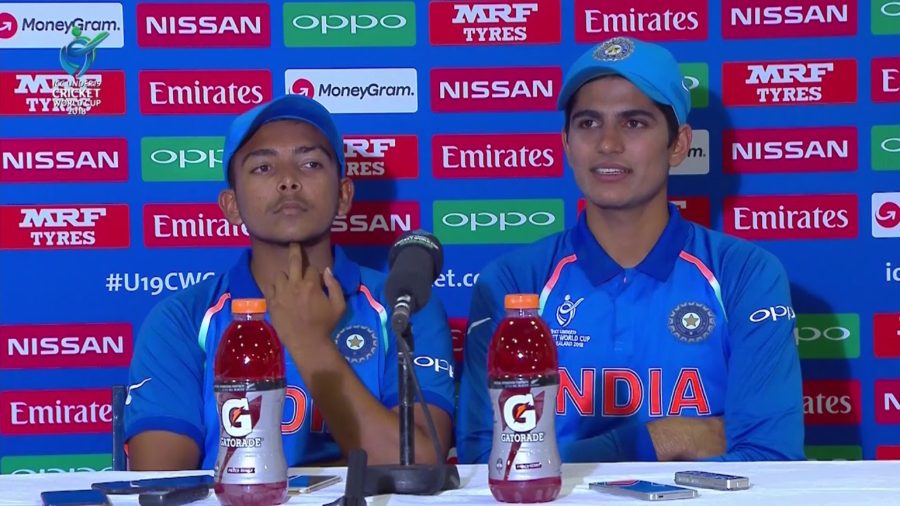 Under-19 World Cup winners Prithvi Shaw and Shubman Gill have broken into the India A squad that will tour England in June-July.

The selectors also decided, in consultation with India coach Ravi Shastri, that M Vijay, Mohammed Shami and Wriddhiman Saha would play for India A in their third and final four-day match to prepare for the first Test against England at Edgbaston, which begins on August 1.

Shaw, 18, already has five hundreds in ten first-class matches and a pair of fifties for Delhi Daredevils in the ongoing IPL season. He has found a place in both the 50-overs and four-day squads while Gill is only part of the limited-overs leg of the tour. Shreyas Iyer will lead the 50-overs squad in a tri-series that also involves England Lions and West Indies A, while Karun Nair will lead India A’s four-day squad.

Shaw aside, Mayank Agarwal and Vijay Shankar feature in both squads. Agarwal’s selection comes on the back of a breakout 2017-18 domestic season, in which he made 2141 runs across formats, the most by an Indian batsman in a single season. Shankar, meanwhile, is being groomed as a back-up for Hardik Pandya as a seam-bowling allrounder. A BCCI official confirmed that the team management was keen to see how Shankar would perform with the ball in seaming conditions.

Rajneesh Gurbani was the only member of Vidarbha’s Ranji Trophy-winning team find a place in the India A squads. Gurbani picked up successive five-wicket hauls in a thrilling semi-final win against Karnataka and in the final against Delhi, a performance that included a hat-trick.

Sanju Samson was picked as a specialist batsman for the 50-over squad, but MSK Prasad, the chairman of selectors, didn’t rule out the possibility that the wicketkeepers would be rotated. Rishabh Pant and KS Bharat are the designated one-day and four-day keepers on the tour.

The 50-overs squad had three allrounders in Krunal Pandya, K Gowtham and Axar Patel. Gowtham was dropped from the India A squad that played New Zealand A last year for “insulting the Duleep Trophy”, but has forced his way back in after impressing for Karnataka and Rajasthan Royals. Axar, meanwhile, will have an opportunity to press home his case for India’s home season, having been left out of India’s limited-overs squads for their tour of England. After his India A commitments, he will play six County Championship fixtures for Durham.

India A’s tour kicks off with the tri-series followed by three four-day fixtures (two against West Indies A from July 4 to 7 and July 10 to 13, and one against England Lions from July 16 to 19).