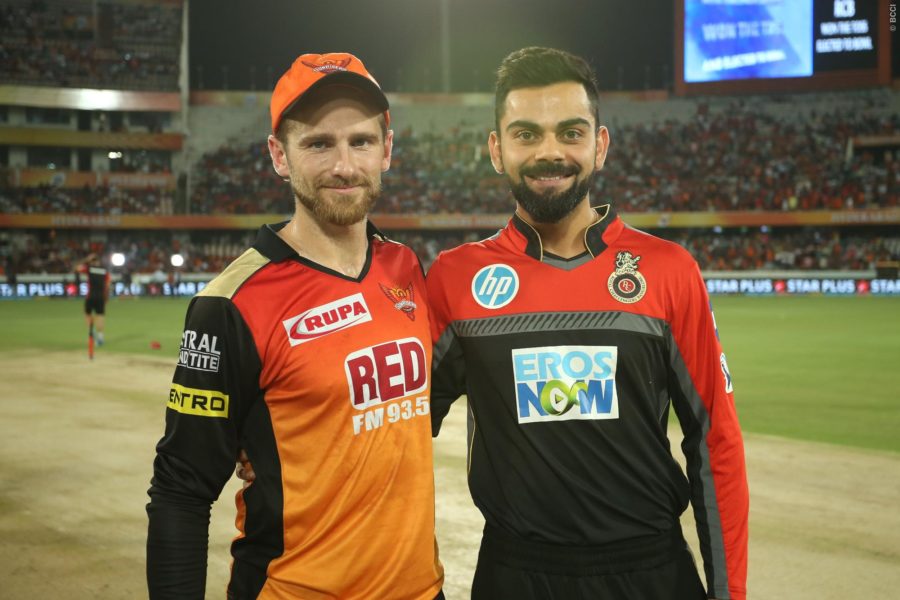 Royal Challengers Bangalore, one of the five teams in the race for the VIVO IPL 2018 playoffs, will lock horns with table-toppers Sunrisers Hyderabad in Match 51.

Royal Challengers Bangalore have blown hot and cold this season, but they’re getting things together right at the business end. Virat Kohli’s team hadn’t won two matches on the bounce in their first ten matches. But faced with a backs-to-the-wall situation, they’ve pulled off two convincing wins in their last two matches; first, they chased down 182 quite easily against the Delhi Daredevils, and most recently routed Kings XI Punjab. The match against KXIP was by far their best; the bowler’s bowled to a plan, the fielders supported their cause in the field, and the openers then knocked off the runs required. As a result of that huge win against KXIP, RCB’s net run rate improved significantly, and they now need to win their remaining two matches to progress beyond the league stage.

Sunrisers became the first team to secure a playoff berth and were shortly thereafter guaranteed a finish in the top two. In their most recent match, they lost to the Chennai Super Kings in Pune. The team management will be just a little concerned that their bowling attack – considered the best in the competition – has now been taken for 180 or more in the last couple of matches; DD scored 187-5, and CSK made 180-2.

SRH should look at those two defeats positively; a blip at this stage – which ended the team’s run of six consecutive wins – would have served as a wake-up call and shaken the players off complacent zones they may have slipped into.

RCB cannot afford to lose, while Sunrisers would want to once again get back to the winning habit. Who will prevail?

Virat Kohli and AB de Villiers are the biggest match-winners among the RCB batsmen. Both batsmen will be high on confidence after playing match-winning knocks recently; Kohli has made 70 & 48 not out in the two wins, while de Villiers was 72 not out in the chase against DD. RCB’s other man-in-form is Parthiv Patel; the left-hander has established himself as an important cog with scores of 53, 20, 6 & 40 not out.

For Sunrisers, Kane Williamson and Shikhar Dhawan have batted beautifully. For Williamson, scoring runs has become something similar to breathing; he just does it. He has to turn up at the crease, instincts kick in and the run meter starts ticking as a matter of routine. Dhawan endured a lean period after taking a blow on his left elbow, but in the last couple of matches returned to his run-scoring ways making 92 not out against Delhi Daredevils and 79 against CSK. Alex Hales has now been dismissed for three low scores; the English opener has the highest strike-rate among SRH’s batsmen, and he needs to survive those early overs to be able to do any significant damage.

Umesh Yadav and Yuzvendra Chahal have become Virat Kohli’s two dependable bowlers. If Yadav is able to knock off the top-order cheaply, RCB will fancy themselves, given the SRH middle-order hasn’t been tested too often this season. Chahal has been successful in keeping control over the scoring, while also dismissing key batsmen in the opposition.

For Sunrisers, each of the bowler’s has made significant contributions to the team’s success. However, Bhuvneshwar Kumar, Sandeep Sharma, and Rashid Khan will have to do the bulk of the damage with the ball. In the last couple of matches, the trio has combined returns of 2-209 from his 24 overs – at an economy rate of 8.71 and an average of 104.50. SRH will need a vastly improved performance from them.

Sunrisers Hyderabad has predominantly employed a 5-man bowling attack. In 7 of their 12 matches, they’ve used only 5 bowlers in the match.

The average first innings total in VIVO IPL 2018 matches in Bengaluru is 182.

Sandeep Sharma has an outstanding record in IPL matches against RCB; he has taken 17 wickets in 10 matches and has an average of 16.65. The last time he visited the M Chinnaswamy Stadium for an IPL match, he rocked the RCB batting line-up, becoming the first bowler to dismiss Chris Gayle, Virat Kohli and AB de Villiers in a particular match.

Both teams will play their respective final league season fixtures next – both matches scheduled to be played on May 19. RCB travel to Jaipur for their away fixture against Rajasthan Royals (4 pm). Sunrisers will play host to the Kolkata Knight Riders at 8 pm later that evening.