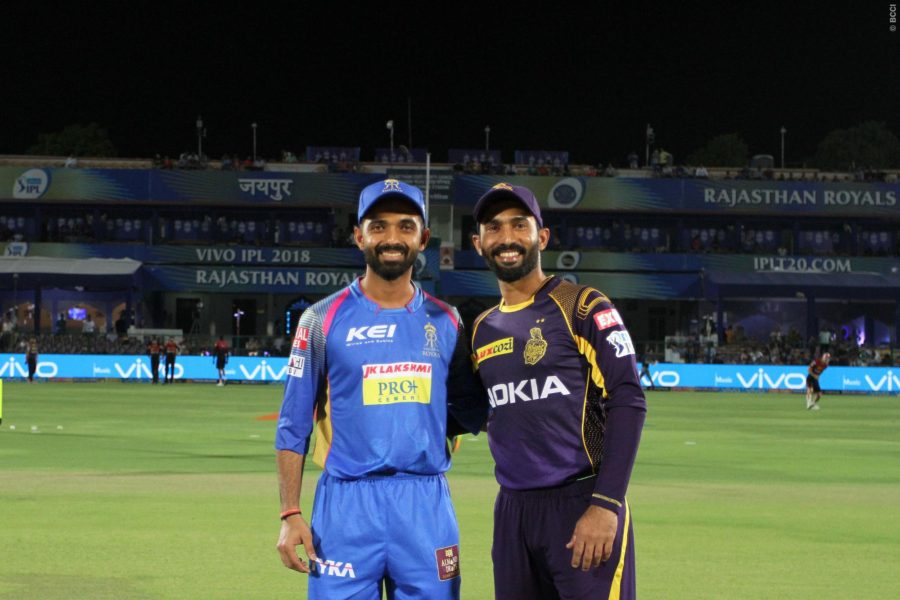 One of Kolkata Knight Riders and Rajasthan Royals will take a step closer towards securing a playoff berth when the two teams meet in Match 49 of VIVO IPL 2018.

In their previous match, the Knight Riders recovered from consecutive losses to the Mumbai Indians in style; they posted the season’s highest total and defeated Kings XI Punjab by 31 runs. KKR haven’t won more than two matches on the trot this season; if they do manage to string together three wins on the trot here, they would have secured a berth in the playoffs.

The Rajasthan Royals have the momentum of three consecutive wins behind them. In their most recent outing, they chased down 169 against the defending champions Mumbai Indians at the Wankhede Stadium. In an exclusive chat with iplt20.compost that win, the RR Mentor Shane Warne mentioned that his team was peaking at the right time, and the players in his team were hitting the straps at just the right time.

Both teams have six wins from 12 matches, and whoever walks away with the two points in this match will have a distinct advantage over their opponent and the other contenders. Who will it be?

Two openers – one a makeshift in the role, and the other a specialist – hold the key to the two team’s fortunes. When Sunil Narine has been promoted and has stayed for a decent length of time at the crease, he has invariably done plenty of damage with the bat. In KKR’s six wins this season, the Trinidadian has scored a total of 220 runs, and in their six losses, he has only managed a total of 57 runs. Those numbers simply drive home how big an influence he has had on KKR’s fortunes. Among the others who have been in good form are Robin Uthappa (who has hit the ball sweetly but has somehow failed to cash in on his form) and captain Dinesh Karthik (the team’s top run-getter this season).

Jos Buttler has been sensational since being promoted to the role of the opener; the Englishman has hit a purple patch– scoring half-centuries in his last five innings, and bettering his career-best score thrice in that period. In these last five matches, Buttler has scored 48.4% of the Rajasthan Royals’ runs. Among the others in the Royals ranks, Sanju Samson has threatened repeatedly; a match-winning knock could just be around the corner.

Despite not bowling at his best, Sunil Narine is still the Kolkata Knight Riders’ top wicket-taker this season. The KKR spinner has, despite the conditions not suiting the spinners, been extremely successful at the Eden Gardens; he has taken 10 wickets in 6 home matches this season and has a very impressive economy rate of 6.13.

Jofra Archer is the Rajasthan Royals’ highest wicket-taker this season; the 23-year old pacer has picked up at least one wicket in each of the 7 matches he has played. In the previous match against the Mumbai Indians, he was sensational, returning figures of 2-16 from his four overs.

When these two teams at the Sawai Mansingh Stadium in Jaipur earlier this season, the Knight Riders restricted the hosts to 160-8 and then chased down the runs quite convincingly, winning by 7 wickets with 7 balls to spare.

KKR has the most productive spin bowling attack in VIVO IPL 2018; their spinners have together picked up a total of 38 wickets.RR’s spinners, on the other hand, have picked up the fewest wickets – 18.

The overall economy rate of the KKR pacers in 10.47 – that’s the poorest economy rate for any team’s pace bowling attack in VIVO IPL 2018.

The average first innings total in VIVO IPL 2018 matches at the Eden Gardens is 182.

Sunil Narine needs 3 more wickets to get to 50 IPL wickets at the Eden Gardens. Only one bowler has taken 50 or more IPL wickets at a particular venue: Lasith Malina at the Wankhede Stadium.