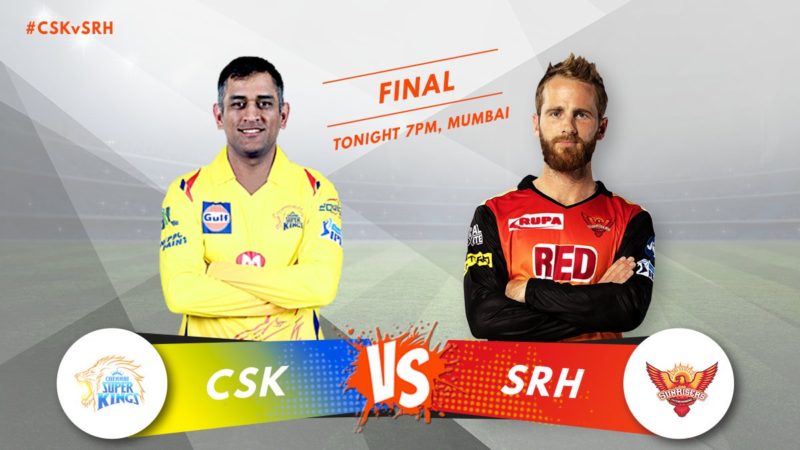 The Chennai Super Kings and Sunrisers Hyderabad will come up against each other for the fourth time this season. But unlike any of their previous meetings, there’s a lot at stake in this particular match. It is the Grand Finale. CSK and SRH are the last two teams standing in the competition, and they will vie to be crowned the VIVO IPL 2018 champions.

Sunrisers and the Super Kings finished the league stage as the top two teams. CSK progressed directly to the Final after they defeated SRH in the first of the playoff matches, while SRH had to defeat the Kolkata Knight Riders in Qualifier 2 on Friday night to make it to the title clash.

The Super Kings have had a four-day break since their jailbreak wins in Qualifier 1. After restricting SRH to 139-7, CSK were in deep trouble at 92-7. But Faf du Plessis used up all his experience, sucked up all the pressure, and delivered a match-winning inning much to the delight of his teammates. CSK won that contest by 2 wickets with 5 balls to spare.

If the Sunrisers are in the final, they have to thank Rashid Khan for it; the all-rounder from Afghanistan had the perfect match against KKR in Qualifier 2 – making crucial contributions with the bat, ball and in the field.

In brief, CSK v SRH is the best batting side this season pitted against the best bowling side.CSK have the most players with season aggregates of 400 or more runs – 4. They have the best batting average overall (35.04) and are the only team to have realised 2 hundred from their batsmen. They have hit the most sixes – 135. Further, CSK has been the best chasing side this season; they have a 7-2 win-loss record in run-chases.

There is no scope for mediocrity and there will be no second chance. Which of these two teams – led by two of the calmest captains ever – will be able to soak in the pressure, do the things that has brought them this far in the competition – if anything a little better, and land the knockout punch on their opponent?

The secret to CSK’s success this season is that they’ve had different players contributing match-winning performances; six different CSK batsmen have been recognised as playing match-winning knocks and have been rewarded with the Player of the Match award. The ones most likely to inflict the maximum damage with the bat are Shane Watson and Ambati Rayudu. Both Watson and Rayudu, who have season aggregates of 438 and 586 runs respectively, have had two poor outings now and are due for a big score.

Suresh Raina has threatened time and again, and contributed important runs, but he has not been able to stamp his authority in the Raina-way. And then there is MS Dhoni. The CSK captain has had a fabulous season with the bat. He loves the big occasion too.

For the most part of the season, Sunrisers have been a two-man batting unit, with captain Kane Williamson and Shikhar Dhawan contributing the bulk of the runs. Williamson, the Orange Cap holder, has batted beautifully; it isn’t about the quantity of the runs alone – but the manner he has amassed them. The Kiwi batsman brings an element of purity to the crease, there’s something appealing – which one can only experience – about the unhurried manner in which he accumulates his runs.

Dhawan began the season well before suffering a blow to his elbow and hitting a trough; the left-hander is back among the runs now and will be an integral part of SRH’s batting plans.

Conditions at the Wankhede Stadium generally have something on offer for all kinds of bowlers. CSK will expect Deepak Chahar and Lungi Ngidi to strike early – just like they did in Qualifier 1 – and allow the likes of Shardul Thakur, Dwayne Bravo and Ravindra Jadeja to control the later portion of the innings.

Rashid Khan and Siddarth Kaul are SRH’s two most successful bowlers – both players have a tally of 21 wickets in 16 matches this season. Rashid’s reputation has been on the rise all the time; the leg-spinner from Afghanistan has not only prised out the opposition’s key batsman generally, but he has also provided his team breakthroughs at crucial times and has choked the batsmen at other times.

Kaul can get the new ball to dart around, but SRH have employed him as a death overs specialist. The 28-year old has impressive numbers bowling at the death; he has 10 wickets and an economy rate of 7.55. In a contest between the two best teams, which can be expected to be played right to the end, Kaul will play a crucial role bowling the last few overs.

Playing in the Final isn’t a new experience for either team. The Super Kings will be making their seventh appearance in an IPL final, while Sunrisers will be playing in their second final.

MS Dhoni will be playing his 8th IPL final; he led CSK in 6 previous finals and was part of the Rising Pune Supergiant team that finished runner-up in 2017.

MS Dhoni needs 7 more runs to make this IPL 2018 his most successful IPL season ever; he has so far scored 455 runs in 15 innings this season.

CSK have a 6-6 win-loss record in IPL matches at the Wankhede Stadium. The corresponding number for SRH is 1-4.

The team batting first has won 7 of the previous 10 IPL Finals.

The winner will be crowned in VIVO IPL 2018 champions, will receive the IPL Trophy and the winner’s purse of INR 20 Crore. Each member of the winning team, along with members of the support staff, will be presented mementos. The runner-up will be presented a cheque of INR 12.5 Crore.