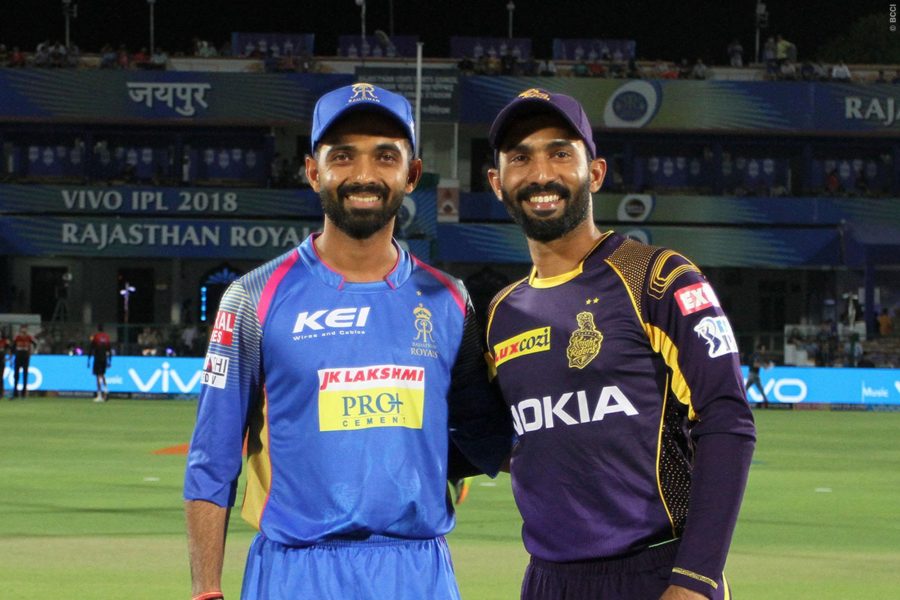 The Kolkata Knight Riders and Rajasthan Royals will come up against each other in the Eliminator – the second of the VIVO IPL 2018 Playoff matches. The two teams have to play their best cricket; there will be absolutely no room for mediocrity, for only the winner will progress in the competition and take a step closer to the Final.

KKR finished the league season in the third position; they won 8 of their 14 group-stage matches, including a run of three wins in their last three matches to charge into the playoffs. In their last league fixture of the season, they defeated table-toppers Sunrisers Hyderabad in Hyderabad.

The Rajasthan Royals just managed to sneak into the top four. At one stage – after their ninth match on May 6, RR had only three wins and were placed at the bottom of the table. Then the turnaround, with Jos Buttler playing three consecutive match-winning knocks. In their last league match, the Rajasthan Royals – sans Buttler, Ben Stokes and without the services of mentor Shane Warne in the dugout – defeated favourites Royal Challengers Bangalore by 30 runs to stay alive in the race to the playoffs. The Gods smiled, other results then fell in favour, and RR made the top-four cut.

While upbeat about making the last four, both teams have problems to address. KKR have had a major issue with their pace bowling attack; their quicks have leaked runs at 10.19 runs per over – the poorest economy rate among all teams. KKR have also struggled for early breakthroughs, conceding big opening partnerships generally and have had to claw their way back into the match. The Rajasthan Royals have not travelled well; they’ve won only two of their seven away matches. Further, not one batsman outside their top three has made a half-century this season; come the big day, if a need arises, will they find someone in the middle-order to bail them out?

Six KKR batsman have scored in excess of 250 runs this season. But the two biggest match-winners for the men in purple and gold are the opener Sunil Narine and captain Dinesh Karthik in the middle-order. The numbers illustrate their importance best. Generally, on occasions when Narine has consumed 10 deliveries or more, he would have put KKR in a solid position. The left-hander has batted for 10 balls or more on seven occasions this season; on six of those occasions (in which he scored a total of 247 runs at a strike-rate of 192.25) KKR went on to win.

That, Karthik, despite batting in the middle-order, is KKR’s top run-getter this season, illustrates how good he has been with the bat. Among others, Chris Lynn has batted responsibly – even if he hasn’t been able to bring ‘Lynnsanity’ to the competition, while Robin Uthappa has struck the ball sweetly, except when he’s attempted the pull shot.

The Royals will look towards their Indian trio – Rahul Tripathi, Ajinkya Rahane, and Sanju Samson – to score the bulk of the runs. Right at the top is where Tripathi belongs and feels comfortable; the 27-year old will carry the confidence of a match-winning unbeaten 80 in the previous match. Tripathi will have fond memories of playing at the Eden Gardens too; it was at this venue that he scored his highest score in the IPL (93). Rahane and Samson have gone off the boil in recent times, and this big-stakes match presents a great opportunity to make a substantial contribution.

Jofra Archer is the one pacer from both sides who is most likely to cause substantial damage with the ball. The 23-year old, Rajasthan Royals’ highest wicket-taker this season, has set the speed gun on fire too; he has bowled two of the three fastest deliveries this season – clocked at 152.39kph and 150.82kph. With so much riding on this match, the Royals need Archer to end his two-match wicket-less streak and return to hitting timber once again.

One can expect plenty of trial by spin in this contest, for both teams have outstanding spinners. KKR’s Sunil Narine, Kuldeep Yadav, and Piyush Chawla have strangled many an opponent this season, as have RR’s K Gowtham and Shreyas Gopal.

The Kolkata Knight Riders have conceded 8 50-plus opening partnerships in their last 10 matches.

The Kolkata Knight Riders have an identical 4-3 win-loss record home and away this season; the Rajasthan Royals have won only 2 of their 7 matches on the road.

The winner of this match will clash with Sunrisers Hyderabad in Qualifier 2 (May 25) to secure a passage to the VIVO IPL 2018 Final. For the team that loses this match, it will be the end of the journey where the 2018 season is concerned.