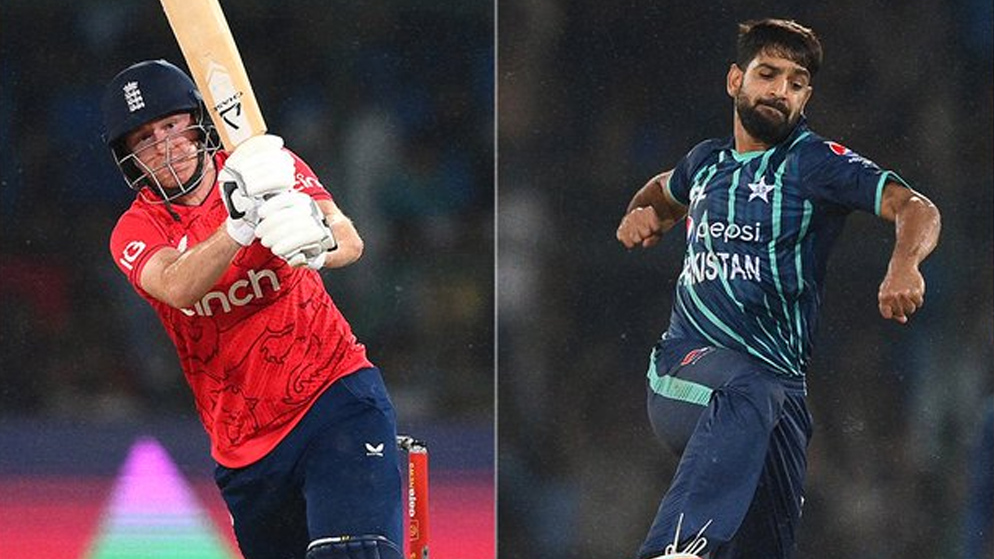 Pakistan and England will meet in Lahore on Friday, September 30, in the sixth T20I of the ongoing seven-game series. Pakistan currently leads the series 3-2 and is just one win away from taking the series. England, on the other hand, will be happy to level the series and bring it to the decider on October 2 at the same venue.

Pakistan now leads the series of seven games 3-2 and now needs to win only one of the remaining two games to win this home series. England is doing well in this series against Pakistan and we know they are playing against Pakistan without their main strength.

England could have easily won two previous matches, but narrowly lost. They lost Game 4 by a three-run margin and came up just six runs short of Game 5. England had lost two games in a row, but that doesn’t mean Pakistan is performing well. It is England’s batting order that is not doing well.

Pakistan made three changes to the last eleven playing for the fifth game of this seven-game series. They gave Haidar Ali, Shadab Khan, and Aamer Jamal a chance. Shadab Khan and Aamer Jamal performed well in the previous match while Haidar Ali again failed to prove his selection was correct. A big question about Pakistan’s average batting order still applies as we saw in the previous match that Pakistan’s average batting order again failed to put big runs on the scoreboard. Mohammad Rizwan is the only batsman from the Pakistani side to score runs in this series at home against England. He has scored fifty-five in the last six games. Babar Azam couldn’t put big runs on the board, but we know he’s a good batsman and can bounce back in any game.

We don’t think Pakistan will make any changes to the last eleven for this match. He will play with the same team as in the fifth game. Khushdil Shah still struggles with the bat and failed to make big runs in previous matches. Iftikhar Ahmed also didn’t score in this series but had good possession of the ball in the previous two games. Pakistan’s bowling unit is world class and they are dangerous in domestic conditions. Haris Rauf had been outstanding in this series against England. He took two wickets in the previous match.

Shadab Khan came back in the previous match and played his first match of this series. He was also good on the ball and picked a wicket. Aamer Jamal made his debut at the T20 Internationals and took a wicket. He threw a crucial 20th where he defended 15 runs and only leaked eight runs. Mohammad Wasim Jr, Mohammad Nawaz, and Iftikhar Ahmed also picked one wicket each.

England did well on this tour of Pakistan, despite losing two exciting games in a row. This is a reality, England is playing without their cream force and it looks like their B-team is going up against Pakistan. The England bowling unit did well in the previous match, limiting Pakistan’s batting order to less than 150 runs from 20 overs. Mark Wood was the longest and most successful wicket-taker by his side, taking three wickets from four overs for just 20 runs. Sam Curran was the other bowler who was just good with the ball. He took two wickets in four overs for 23 runs. David Willey was the only other bowler to have two wickets to his name in three overs while being charged for 23 runs. Chris Woakes took a wicket in the previous match.

Adil Rashid proved to be the most expensive bowler on the England side, leaking 41 runs in four overs and also unable to pick wickets. England’s batting order was not impressive in the previous game. Unable to chase low on the board target, they scored 139 runs chasing the 146-run target. The captain, Moeen Ali, was his team’s most successful and highest runs scorer, scoring 51 runs and not being left out. Dawid Malan was the other bowler to put some runs on the board. He scored 36 runs while facing 35 balls and hit six huge sixes in his inning. Sam Curran scored 17 runs while Ben Duckett only had 10 runs to his name.

Pakistan vs England 6th T20 Squad and Probable Line Up

The surface of the Gaddafi stadium generally even offers competition between bat and ball. The average total in this field over the last five T20Is that have produced a result is 156. The teams that hit first in this field have won the game eight times, while the teams that chased have won that many times too. The team that wins the toss will likely choose to pitch first and speed up their innings based on the goal in the second inning.

Weather forecast for this match

The weather forecast in Lahore on the day of the match is not very good. There are some chances of rain, but we may have an interrupted game.

The draw can play an important role in the decision of this match. According to our toss prediction, the team that wins the toss can choose to bat first.

England has a strong batting order and bowling unit compared to Pakistan, so England’s chances of winning today’s match have increased. The comparison of winning odds for both teams for today’s game is listed below.