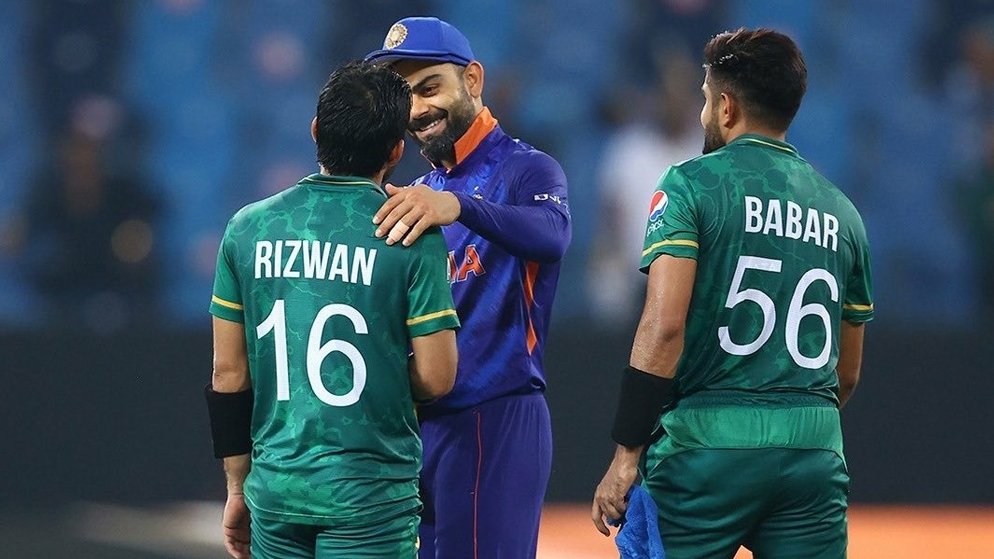 When the dust settled on the Dubai International Cricket Stadium on Sunday evening, the Indian cricket team was staring at the scoreboard in dismay and disbelief. They had just been beaten by their historic rivals Pakistan most staggeringly. Pakistan reached the target of 152 without losing a single wicket. The decades’ old record that India had held over Pakistan in ICC World Cup tournaments had just come crashing down on their very faces.

To add to India’s woes, this was the first time that India had lost a T20 international match by 10 wickets. On the other side of the spectrum, this victory was the first time Pakistan had won an international T20 match by 10 wickets. The Pakistani supporters could not have asked for a better occasion to witness such an event. It was a day when the skippers of both the teams scored well-deserved half-centuries. But in this case, it was Babar Azam who and his team came out on top.

The Heroes Who Turned The Tide

The heroes of the match were undoubtedly Pakistani batters Babar Azam and Mohammad Rizwan, the formidable openers of Pakistan. Skipper Azam, with a knock of 68 not out off 52 deliveries, and Rizwan, 79 not out off 55 deliveries, shook India’s struggling bowling department. They single-handedly marched on to 152 without showing any signs of weaknesses in front of the wicket. Together, they hit 12 boundaries and 5 sixes to take their team to a comfortable victory. Pakistan finished their chase at 17.5 overs, with 13 balls to spare. Such a level of mastery with the bat would surely go on to become one of the best in T20 history.

From the outset of the match, Pakistan’s body language and team spirit was overshadowing that of their Indian counterparts. After winning the toss, Pakistan chose to field and immediately put the Indian batters in disarray. The Dubai pitch, widely known to be tilted towards the batsman’s favour, moved from its usual demeanour and made it challenging for the Indian batters at the beginning of their innings. This led to the fall of three wickets in quick succession during the power play.

It was Virat Kohli who put on a real fight from the Indian side and scored a half-century. He was given support by Rishabh Pant, who scored a well-made 39. Their 53-run partnership was the sole highlight of the Indian innings. From a tough situation when India was reeling under pressure at 36 for 3, they made sure that it would not be a complete humiliation and the team would reach a respectable total.

Credit should be given to the Pakistani bowlers for giving the Indian batters a difficult time at the crease. Shaheen Shah Afridi, clearly a star-in-the-making, rattled the Indian top-order with his sheer pace and swing. He got the crucial wickets of K L Rahul and Rohit Sharma, a blow from which India found it hard to fully recover.

On the spinners’ front, the show was again stolen by the threesome from Pakistan- Imad Wasim, Shadab Khan and veteran Mohammad Hafeez. Combining to form a strong barrier between the Indian batsmen and the ticking scoreboard, they gave away a meagre 47 runs in the 8 overs they got to bowl together. This was one of the chief reasons India failed to register a big score after seeing off the threat from the pace bowlers. On top of this, the final death overs were also well orchestrated by the Pakistani side. They made sure India could not post a bigger score, with bowlers such as Harris Rauf putting the plan rolling brilliantly.

With an average total to defend, Captain Kohli had put his faith in his bowlers to produce from the word go. However, that was not to be the case. It was Pakistan’s day all in all and the opening pair of Azam and Rizwan took the game under their control without the slightest hiccup. They began outsmarting the Indian pace contingent composed of seasoned bowlers Bhuvaneshwar Kumar, Jasprit Bumrah and Mohammad Shami and made their work of chasing look easy. The Indian pacers on their part were not getting any help from the pitch nor were they being able to generate adequate pace and swing throughout their spell. Before even Kohli could think of Plan B, Pakistan had cruised to 50 in the 8th over. From then onwards it became a case of the inevitable. It was not to be another World Cup defeat for Pakistan.

The curse had been lifted. It was now time for the Men in Green to bask in the glory of a world cup victory at the expense of their frustrated neighbours. This could be the dawn of a new Pakistani era, one which would give fans much to rejoice.