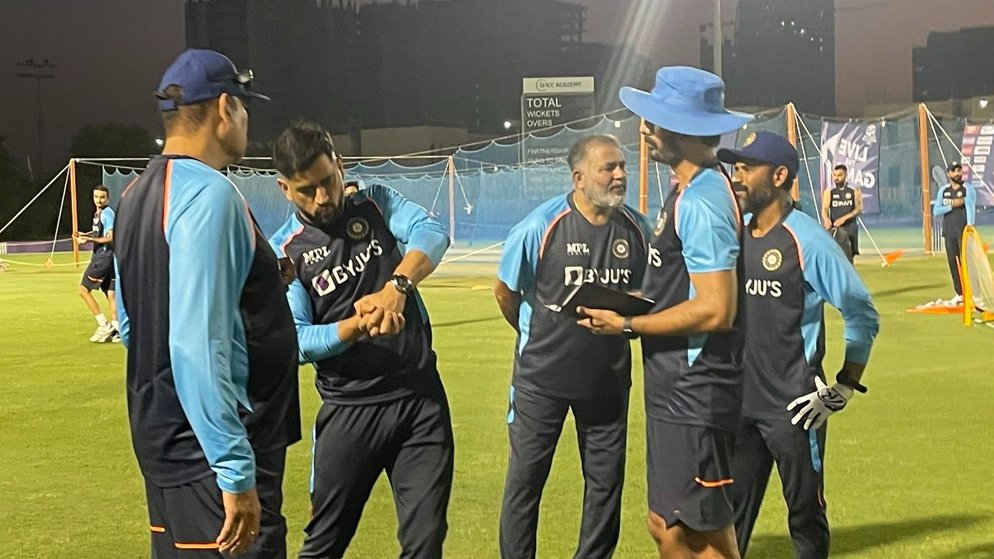 Almost a year has passed since India’s Captain Cool Mahendra Singh Dhoni announced his retirement from all formats of international cricket. Yet, that hasn’t put a dent on the mammoth following that the man has. Naturally, cricket Twitter and Dhoni fans around the world were sent into a frenzy when the Board of Control for Cricket in India (BCCI) announced that the charismatic MS Dhoni would be returning to the India team fold as a mentor for the ICC Men’s T20 World Cup.

When the news came that BCCI had appointed MS Dhoni as the team mentor, it was reported that many of BCCI’s own members were taken aback. Sources indicate that BCCI president Saurav Ganguly and secretary Jay Shah were the main driving forces behind this appointment. Jay Shah even met with MS Dhoni and had a lengthy discussion in the United Arab Emirates where the IPL franchises had set camp to play out the remainder of the IPL 2021 season. And since then, Indian cricket fans have been eagerly waiting to see the impact the former Indian captain has on the current crop of players.

However, what was the main reason behind this appointment? Fingers point to the unsuccessful Virat Kohli-Ravi Shastri pairing at major ICC tournaments. The teams led by Virat Kohli have either lost at the finals or haven’t reached the finals in ICC events. Kohli’s unlucky streak continued when under his stewardship, India lost the ICC World Test Championship to New Zealand. Incidentally, the last time India was successful at a major ICC event was eight years back in 2013, when MS Dhoni and his troops defeated England to lift the ICC Champions Trophy. Since then, India have returned empty-handed from all ICC events.

MS Dhoni, who is India’s most successful white-ball cricket captain, will be looking forward to influence the current squad to have the hunger and urge to jump the final hurdle.

Dhoni Joins Up With Squad

As soon as the IPL 2021 season concluded, MS Dhoni joined up the Indian team squad to fulfill his role as team mentor. The 40-year old Dhoni, who might not have had the most stellar IPL season in terms of runs, displayed magnificent leadership skills to guide Chennai Super Kings to their fourth IPL title. This fourth title comes on the back of CSK failing to qualify for the play-offs for the first time in their history.

Thus, Dhoni will be bringing that elite winning mentality to the squad that he is renowned for. Indian team opener KL Rahul also spoke to the media about Dhoni’s instant impact on the squad and how he has brought a sense of calm in this dressing room filled with the nervous energy of young players. For the newer players in the squad, it could be really valuable to learn from the legendary MS Dhoni.

After joining up with the national camp, MS Dhoni was pictured talking with head coach Ravi Shastri, fielding coach R Sridhar, and bowling coach Bharat Arun. Following the warm-up game against England, MS was also seen in conversation with Shastri, team captain Virat Kohli, and Rohit Sharma, who has been rumoured to be India’s next T20 captain after Kohli resigns his duties following the T20 World Cup.

Despite having a fairly young squad, India are amongst the favourites to win the World Cup this time. They have some exciting new talents in their squad like Shardul Thakur and Ishan Kishan who are players that can turn around a match in an instant. India will start their campaign on the 24th of October against arch-rivals Pakistan. In the battle between the two neighbours, India have never lost a World Cup game against Pakistan and Kohli & co. would be looking to continue that record.

The Indian side seems to be in good form as was evident in their performance in the warm-up game against England on Monday. Chasing a 188 in 20 overs; India comfortably reached their target with an over to spare with openers KL Rahul and Ishan Kishan leading the charge. KL scored 51 while young gun Ishan Kishan slammed home 70 runs in 46 balls. It remains to be seen how India does against their next warm-up game against Australia; but if they can continue this form, they will be firmly established as tournament favourites. And having MS Dhoni as team mentor always helps.