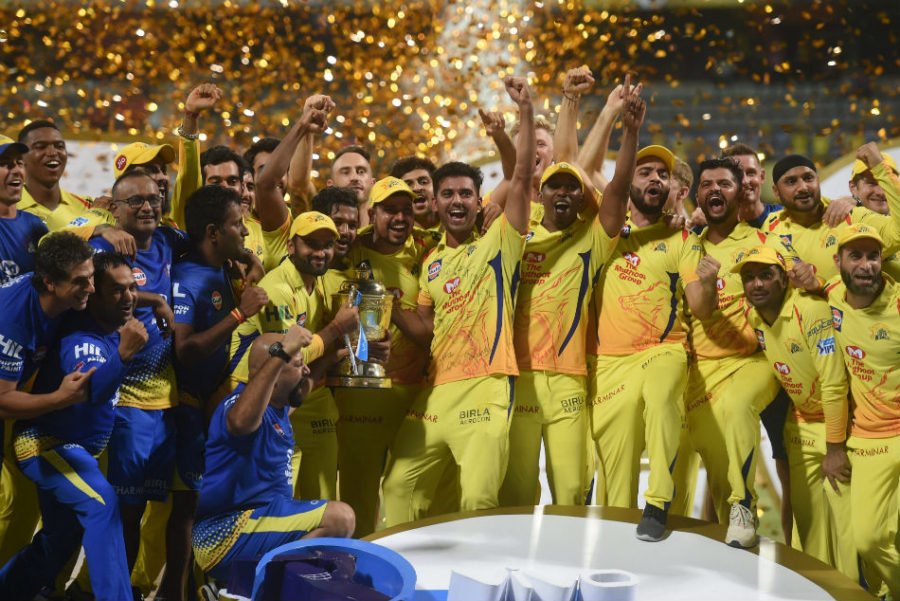 The Indian Premier League this season may well have been the most closely contested in its 11-year history, but it was hardly a photo finish when it came to how the teams fared with the returns they got off their auction punts. While each of the teams had their fair share of hits and misses, some teams ended up doing significantly better than others in terms returns on their buys at the January auction.The best and worst buys of the season based on how the players fared on the field and the money they cost.

The price that teams pay for the services of a player may not always depend purely on his potential to perform on the field. His marketability off it and his popularity among local fans to drive gate revenues – among other factors – may also play a role. However, for the purpose of this exercise we look at the season numbers – runs, strike-rate, wickets and economy – to arrive at guesstimates of the notional returns that the players generated for their teams and how the teams themselves fared.

A number of actions on the field in cricket aren’t easily measurable and would need a much-evolved effort to quantify: how would one quantify MS Dhoni’s instincts as a captain or AB de Villiers’ I-can-fly-too catching effort? To keep it simple, for the reader, and for ourselves, we look at only the easily quantifiable aspects of the game – batting and bowling – in this analysis. To this end, only the runs scored, strike rates, wickets taken, and the economy rates are taken into account to come up with a return on investment value for each player and thereby, for each team.

These players generated values of over INR 10 Crores and should trigger off a prolonged bidding war in the next auction if this season is anything to go by. Nine of them make the cut with Narine topping the list. He chipped in with returns of 14.59 Crores for KKR through his performances. Rishabh Pant, Rashid Khan, Shane Watson, Andre Russell, Kane Williamson, KL Rahul, Andrew Tye and Hardik Pandya complete the list. 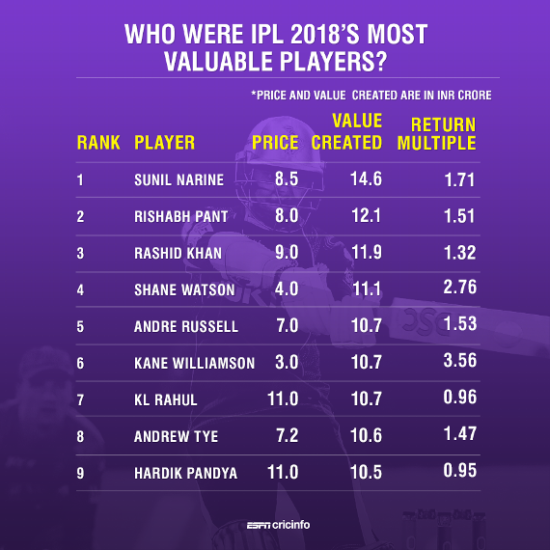 Graphic: Sunil Narine’s all-round excellence put him right at the top of the MVP charts in IPL 2018 ESPNcricinfo Ltd

These were the relatively cheap buys who ended up contributing in a big way for the teams. Among players to play in at least seven matches this season, Mayank Markande was bought at his base price of just INR 20 Lakhs, but generated notional returns of INR 6.37 Crores through his performances. The rest of top-five, incidentally, are all bowlers who were bought cheap but turned in creditable performances: Shreyas Gopal, Prasidh Krishna, Lungi Ngidi and Deepak Chahar. 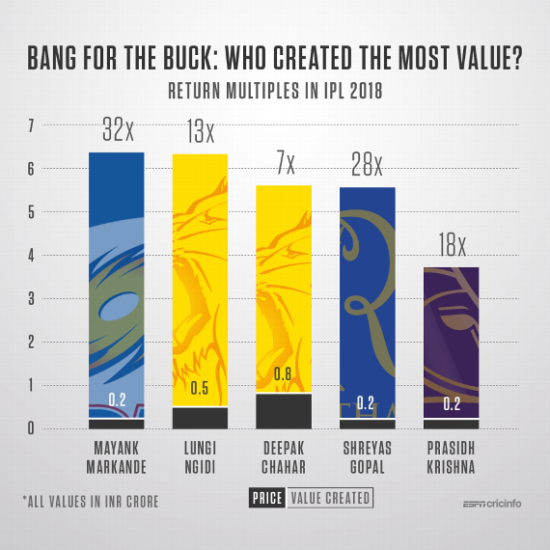 Graphic: Rookie wristspinner Mayank Markande was among the biggest surprise packages in IPL 2018. Multiples for players who played seven games and above. ESPNcricinfo Ltd

Rohit Sharma came at a price tag of INR 15 Crores but could generate returns of only INR 3.88 Crores. His negative return of 74.12% makes his the most over-priced buy of the season when we look at only his batting performances. However, he is excluded from this list as he contributed by leading the Mumbai Indians. Among players who didn’t add value to the team as captains or as wickekeepers, Deepak Hooda was the worst buy of the season. He was bought at a price of INR3.6 Crores by Sunrisers, but could generate returns equivalent to only INR 95.34 Lakhs: a negative return on investment of 73.52%. Yuvraj Singh, Aaron Finch, Manish Pandey and Axar Patel round up the bottom five. Like Rohit, Wriddhiman Saha – whose performances with the bat a created returns of a negative 70.22% – too avoids this club on account of him being a wicketkeeper.

The spectators in the XI

These players, well, were just there. No significant performances of note with bat or ball and ended up creating notional value of less than INR 1 Crore. Stuart Binny was bought for INR 50 Lakhs in the auction and he managed to generate just enough to cover his cost for Rajasthan Royals. Among players to play at least seven matches in the season Binny contributed the least in terms of his performances. Yuvraj, Sarfaraz Khan and Deepak Hooda complete this club.

These were value-for-money buys: not necessarily bought for cheap money but turned in performances that justified their price tags and more. Williamson returned his team more bang for the buck than anyone else in the season: he was bought at INR 3 Crores and generated INR 10.65 Crores. The difference of INR 7.65 Crores between his auction price and his notional performance value is the highest for any player this season. Shane Watson, Shakib Al Hasan, Ambati Rayudu and Narine round up the top-five.

At the end of the league stage, Mumbai Indians, Royal Challengers Bangalore and Kings XI Punjab were tied on 12 points with NRR deciding their eventual spot in the table. However, the return on the investment that they generated through their players’ performances were significantly different. Royal Challengers Bangalore spared no expense this season, doling out over INR 2 Crores to as many as 12 players, in addition to spending INR 28 Crores on two of their retentions in Virat Kohli and de Villiers. In comparison, MI and RR had only nine such players (excluding retentions). A forgettable season for the team meant that they were the least profitable team with a return-on-investment of -19.98%. Royals managed to just get across the line to the playoffs this season, but the negative ROI is reflected in their most expensive buys of the season in Ben Stokes and Jaydev Unadkat underperforming. They were the only team with a negative ROI to make it to the playoffs. On the other hand, Delhi Daredevils returned a positive ROI for the season in spite of getting the wooden spoon. It only helped that Chris Morris who was retained at a price of INR 7.1 Crores left midway due to injury driving down their costs.