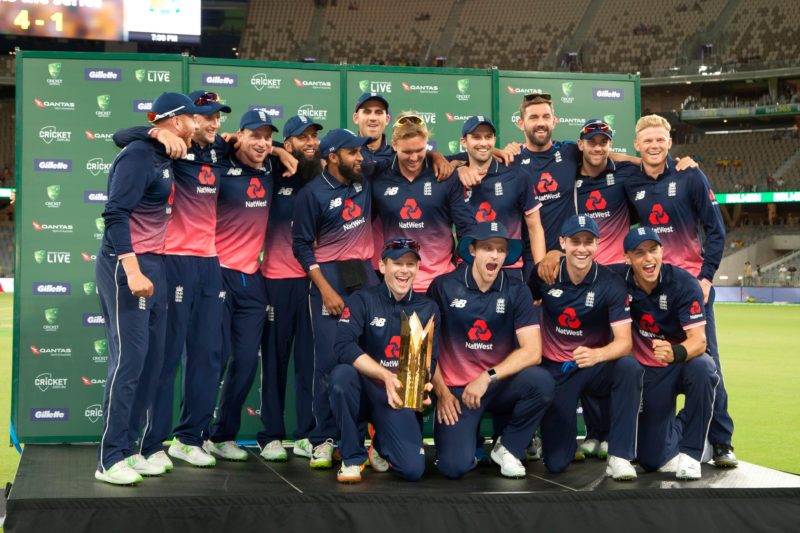 Jos Buttler made a brilliant unbeaten 110 to give England a dramatic victory in the fifth one-day international and a first 5-0 whitewash over Australia.

Rashid was dismissed with 11 needed, but Buttler hit the next ball for six to move to his sixth ODI century.

Last man Jake Ball survived an Ashton Agar over and Buttler completed a one-wicket win with nine balls to spare.

The two sides meet in a one-off T20 at Edgbaston on Wednesday, with England then welcoming India.

England have dominated a depleted Australia in this series – they hammered a world record 481-6 in the third match at Trent Bridge and then overhaul 310 with more than five overs to spare in Durham on Thursday.

However, they looked to have wasted the chance of the whitewash and only their second 5-0 ODI series win against any opponent.

That was to discount Buttler, who curbed his usual attacking instincts to manoeuvre the ball into gaps, run hard and only occasionally crack it through the off side.

With the determined Rashid at his side, Buttler gradually raised both belief and tension inside a boisterous Old Trafford, only for Rashid to depart for 20 – caught at fine leg off the medium pace of Marcus Stoinis.

Buttler heaved Stoinis over the straight boundary from the next delivery, but the cheers for his century were eclipsed when Ball kept out left-arm spinner Agar.

Buttler could only take a single from the first ball of the next over, leaving Ball to face four deliveries from pace bowler Kane Richardson, taking a single of his own.

Crucially, Buttler got the strike for the 49th over and hammered Stoinis’ third ball through the covers to complete an incredible victory.

In superb batting conditions, Australia demonstrated a more aggressive intent in a bid to keep pace with England. Openers Travis Head and Aaron Finch added 58 in the first six overs.

When Moeen Ali came on in the seventh over and hurried one through Finch, it began a collapse that saw the tourists lose all 10 wickets in the space of 28.2 overs, their frailties against spin once again exposed.

Moeen had Stoinis miscue a sweep and Shaun Marsh stumped. Later, he bowled last man Billy Stanlake for figures of 4-46.

In between, everything went the home side’s way as some spectators filed out of the stands to watch England’s 6-1 World Cup victory over Panama.

Wicketkeeper Buttler’s run out of Tim Paine – tumbling and throwing in one motion – was spectacular, while Agar was bowled shouldering arms to debutant Sam Curran.

Head played square of the wicket and down the ground for 56 and, later, Alex Carey and D’Arcy Short halted England in a sixth-wicket stand of 59.

Carey swept, flicked and hit Joe Root for a straight six in his 44, while Short played handsome drives to be unbeaten on 47. They dragged Australia to 205, a total that was very nearly enough.

Tall and quick, 23-year-old Stanlake is the sort of fast bowler that has terrorised England on recent trips to Australia, even if he has played only two first-class matches.

Here he took advantage of the pace and bounce offered by the pitch after Australia’s tactic of opening the bowling with Agar saw a swiping Jason Roy bowled in the first over.

Jonny Bairstow chopped on to his stumps, Root pushed to first slip and captain Eoin Morgan, beaten for speed, was bowled between bat and pad.

After Alex Hales edged a wide delivery from Richardson, England were five wickets down when the interval was taken.

Buttler was in the process of facing 122 balls in what was his longest ODI innings, but lacked support – Curran and Liam Plunkett both played loose drives to successive Richardson deliveries to leave England eight wickets down.

Rashid, though, was obdurate in defence. Even though the ball began to reverse swing, he helped Buttler see off the tiring Stanlake and was similarly patient against Agar.

England looked to be over the line, only for Rashid’s misjudgement against Stoinis. Then came the last-wicket drama and joyous celebrations.

Man of the match Jos Buttler told BBC Sport: “We should have chased that total down with ease, but it’s fantastic to win it. They’re so enjoyable when you win by a wicket.

“It’s a good habit to have, knowing how to win and finding a way to win when you probably shouldn’t. Adil Rashid played a fantastic hand, and so did Jake Ball. He soaked it up and handled it brilliantly.”

England captain Eoin Morgan: “Today was mesmerising. Jos was outstanding. Everyone in that changing room is very proud of him. We were very poor today and Jos really did pull something special out to get us over the line.”

Australia captain Tim Paine: “We’ve certainly been taught a lesson by a world-class outfit. We had them under pressure. Jos and Rashid played really well but we didn’t get enough balls in the right area. With bat, ball and in the field during this series, we’ve folded a little bit.”

Former England captain Michael Vaughan on Test Match Special: “Jos Buttler knew that it was down to him. You get a sense that he really enjoyed it – MS Dhoni and AB de Villiers are like that. You need to have a huge amount of inner belief and strength.

“Without him, this England team would be a very good one. With him, they’re outstanding.