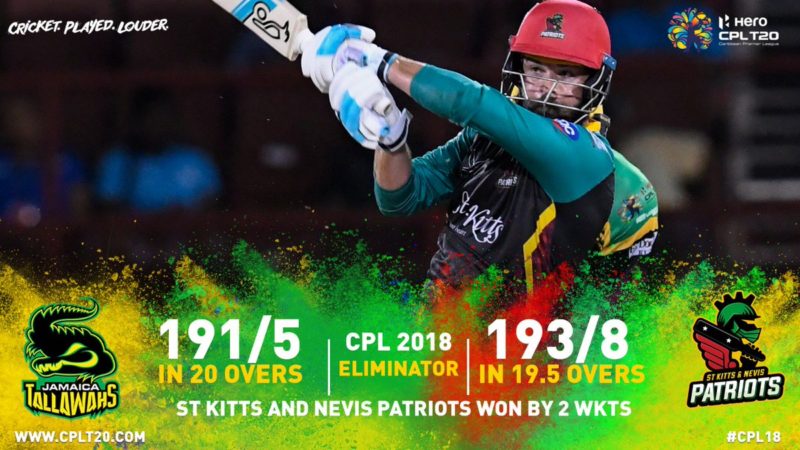 St Kitts and Nevis Patriots kept their CPL 2018 campaign going as they trounced Jamaica Tallawahs in the Eliminator to seal a thrilling two-wicket win in Guyana on Wednesday (September 13).

Glenn Phillips smashed a ton to help Tallawahs post 191 for 5 before Anton Devcich’s half-century and some nerveless batting from Ben Cutting saw the Patriots go past the target off the penultimate ball.

Patriots were well placed in the chase with Chris Gayle and Rassie van der Dussen batting in the tenth over and with 62 on the board. Though the asking rate had climbed up, the platform was set for a late assault. However, Ish Sodhi landed a double blow to leave them wobbling at 62 for 3.

Fabian Allen and Brandon King just about kept the team afloat with a 56-run stand but Sodhi returned to break the stand and helped Tallawahs nose ahead. Devcich fell with the team still 34 away from the target but in a fairly comfortable position with 20 balls left.

Oshan Thomas dismissed the dangerous Evin Lewis while Rovman Powell got ride of Carlos Brathwaite to take the game close. Patriots needed 15 in the last over but Powell failed to hold his nerve. After he dismissed Brathwaite, he bowled four wides to leave the equation down to 5 off 2.

Cutting then launched him over midwicket to seal a win and knock Tallawahs out of the tournament.

At the half-way mark, Tallawahs were in a much better position but will probably rue the lack of contributions from the middle order. Apart from Phillips scoring a 63-ball 103, all thebatsmen struggled. Phillips fell on the last ball of the innings but had done his bit to ensure the bowlers had more than enough to work with before Cutting and Devcich ruined it for Tallawahs.