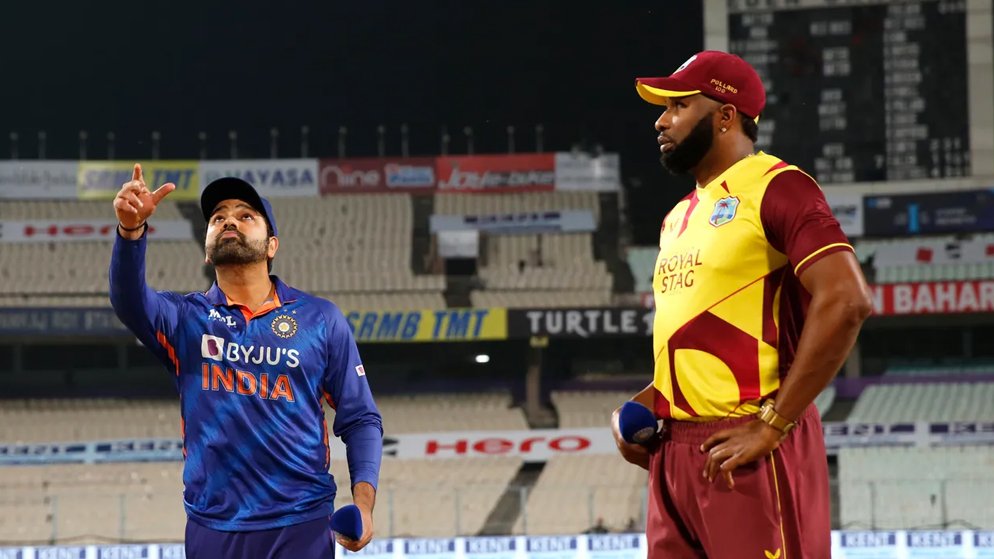 The third and final T20 International between hosts India and visitors, the West Indies, is going to be played on Sunday, February 20, 2022. India has taken an unassailable lead in the 3-match T20 series by winning the first and second T20Is. On the other hand, the West Indian contingent would be looking forward to a game in which they would play to instill some pride in their side.

It should be noted here that before the ongoing T20 series, India had seeped the 3-match ODI series 3-0. The sheer calls and dominance of Team India have rattled the West Indians so far in this tour. They have now lost five games in a row against India and will be going for some serious soul-searching once the last game is wrapped up.

Team India, with a new full-time skipper and vice-captain, and with the inclusion of fresh new faces in the squad, will surely go for the kill by maintaining their winning streak against a hapless Caribbean side.

The last T20 International match between India and the West Indies will be played at the same venue like the ones before it. The historic Eden Garden in Kolkata will once again bear the brunt of hosting an international game. The umpires and the players of both teams are likely to take the field by 6.45 pm, and the match will kick off exactly at 7 pm (IST).

The weather in Kolkata at this time of the year remains very pleasant. This is the ideal time to host sporting competitions in the city. On Sunday, February 20, the weatherman predicts that temperatures would circle 23 degrees Celsius. Since it is wintertime here in Kolkata, the air will keep dry on the whole. Statistics show that mean humidity will be close to 50% on Sunday, with minimal to non-existing chances of rainfall. It has been a windy week in Kolkata, and Sunday will be no different. Wind speed is expected to be around 3-8 km/hr on Sunday evening.

The pitch at the Eden Gardens has so far shown promise for both the batters and the bowlers. In the first couple of T20Is, we have seen teams scoring a flurry of runs all over the park. Although the Eden pitch has historically been a low-scoring one, this T20 series has shown that with careful management, most cricket pitches can be made batsman-friendly. Spinners such as West Indian Roston Chase and India’s Ravi Bishnoi have gained an advantage from the pitch in the last two games when the ball was spinning considerably.

On a similar note, swashbuckling batsmen like Indian captain Rohit Sharma and star Windies batsmen Rovman Powell and Nicholas Pooran, have both shown some fiery batting throughout the series. Since this will be an evening match, there are high chances that the dew factor will come into play as the match progresses into the night. No one will be surprised if the captain who wins the toss elects to bat first.

Cricket fans in India and elsewhere will be able to watch the match live on the Star Sports Network. Viewers will also have the option of selecting the coverage in their preferred regional languages such as Hindi, Tamil, and Telugu. All those who watch live games on their mobile devices and smartphones will get the chance to follow the match live using the application Disney+Hotstar.

Head-To-Head Between India And The West Indies

Team India and the West Indies have encountered each other in the T20I format a total of 19 times in their joint cricketing history. India has been the clear dominator in this fixture by winning on 12 occasions. The West Indies have managed to eke out only 6 wins so far. Only one game between these two sides has ended without a result.

It is pertinent to note that Team India is beginning to look like a deadly side. This is welcome news for millions of cricket fans in the country as they believe that their side is picking up momentum right before the T20 World Cup.