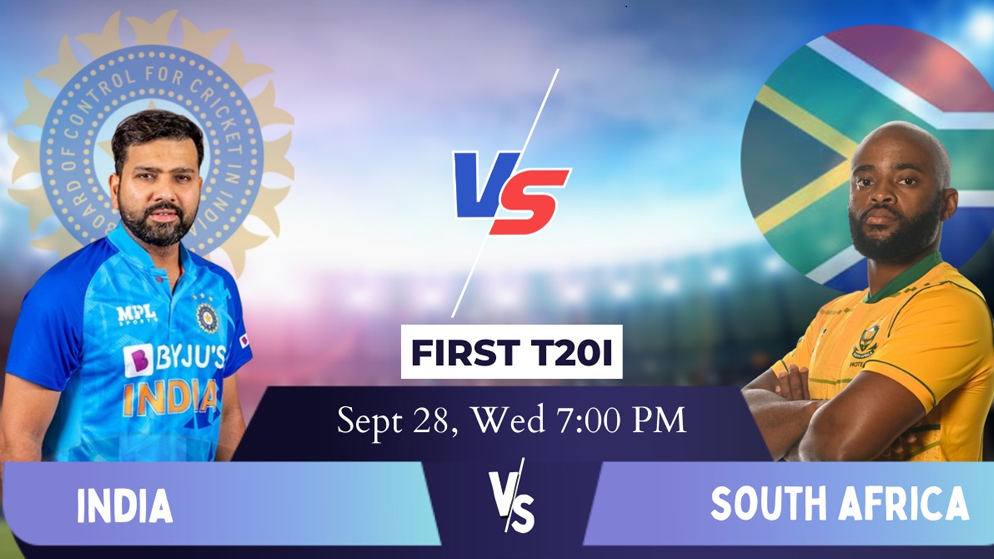 India vs South Africa – 1st T20I: Team India will face South Africa in a three-game series of T20I, starting with the first T20I on Wednesday, September 28 from 7 PM IST in Thiruvananthapuram.

The Men in the Blue side is coming off a T20I series win against Australia; while South Africa has a huge record of not losing a single T20I series against India in India.

The Indian team made a comeback in the recently concluded 3-game T20I series against Australia. After losing the first match, India bounced back and won the second and third T20Is to win the series 2-1. All batsmen have shown good intentions where Suryakumar Yadav emerged as the top scorer with 115 runs in 3 matches. Hardik Pandya was the second top scorer with 105 runs but is equipped for this series with the upcoming T20 World Cup ahead.

Among bowlers, Bhuvneshwar Kumar was a disappointing look with just 1 wicket in 2 matches, while giving up 91 runs from 7 overs bowled. However, Bhuvi is kitted out for this series with the promising young pacemaker Arshdeep Singh making his way onto the squad. Mohammad Shami is also returning after losing his place in the team to Umesh Yadav due to covid.

The South African team looked wildly superior in its performance and has not lost a T20I series against India since 2018. Among the batsmen; Reeza Hendricks has been in excellent form this year, scoring 223 runs in 7 innings, averaging 46.14 and 139.82. . Heinrich Klaasen also showed form with 202 runs in 7 innings.

Pacer Lungi Ngidi and spinner Tabraiz Shamsi have remained the top wicket takers for South Africa this year with 13 and 12 wickets to their name in 7 and 9 matches respectively. Along with Keshav Maharaj, Anrich Nortje, and Kagiso Rabada, the South African team looks formidable enough to win the series. Note that South Africa toured India for 5-Q20I earlier this year, which ended in a 2-2 draw.

IND vs SA Head to Head:

India: There are 3 changes to the Indian team in the series against Australia: Mohammad Shami and Arshdeep Singh came in for Umesh Yadav, Bhuvneshwar Kumar, and Hardik Pandya.

The field at Arun Jaitley Stadium is good to hit. The ball hits the bat well and batters can clear their strokes from the start of their innings. Expect the surface to stay true throughout the match.

The conditions are ideal for a cricket match. Temperatures in Delhi on Thursday are expected to range from 31 to 43 degrees Celsius.

Despite South Africa holding an impeccable record in the bilateral T20I series against India, the home team will be the fringe favorites in the 1st T20 as they take a confidence-building win over Australia a few days ago. Sure, SA can surprise anyone on their day, but India looks firmer now with Virat Kohli in good contact.