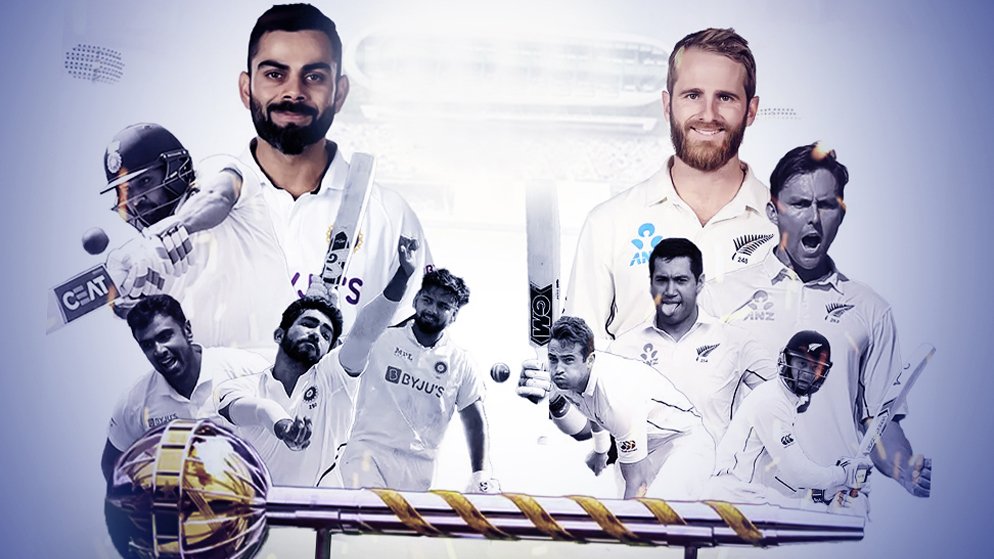 The inaugural edition of ICC Men’s World Test Championship will see the finalists, India and New Zealand, take on each other on the 18th of June. The players and the fans who have been left cooling their heels for days can finally witness the clash of these two giants on Friday.

Possibly the biggest test match of this year, the game will be played in Rose Bowl Cricket Ground in Southampton, England.

The match begins at 3pm IST on 18th of June and will continue till 22nd of June. The Rose Bowl Stadium also known as Ageas Bowl Stadium is home to the Hampshire County Cricket Board. The pitch is said to be dry and has no layers of grass in it. This makes it a batting paradise and puts a huge onus on the spin bowlers to get as many dismissals as possible. The vantage points for fast bowlers is comparatively less than the spinners, hence encounter greater difficulties. The pitch conditions look pretty good and an average total of 300 is not a lot to expect from the sides.

The spinners will be the greatest asset of both teams as they can curb down the runs during the third and fourth innings. The pitch will become more advantageous to them as it wears down slowly.

The Kiwis are apparently enjoying their time in London playing England. A two match test series  between England and New Zealand right before the ICC Men’s World Test Championship Final has landed as a boon to the Kiwi side. It is safe to say New Zealand have grown quite accustomed to the playing conditions in England, and will be able to withstand the unusually cold summer over there. The 2-match test series has ended  in New Zealand’s favour, the Kiwis have emerged victorious winning one and drawing the other. It is safe to say that Kane Williamson and his group of boys are in red hot form and will not be an easy nut to crack in the WTC final.

Reports suggest that Kane Williamson, who picked up an elbow injury and was forced to pull himself out of the second test against the English side, has recovered and will be available for the final. The Kiwi wicketkeeper BJ Watling, who too had missed the second test and had Tom Blundell cover for him, has also been picked in the squad.

The 15-man squad announced by Gary Stead is,

Coming to England, Virat Kohli and his boys had to undergo quarantine for a number of days. To get themselves up and running, the boys played a 4-day intra-squad match. A number of players shined during the warm up game and it looks good for India as they are desperate to gear up themselves ahead of this big clash. Although it is true that the Blackcaps have had a bit of fortune on their side, coming to England early, the Indian test squad might have an edge over them. The rhythm of the game and weather might be with New Zealand, but when it comes to performances the Indian side has been staggering. Their win at Gabba will be the biggest example of how dreadful the blue army could be.

India announced their 15-man squad ahead of Saturday’s clash.The likes of Shardul Thakur, Washington Sundar, Mayank Agarwal and KL Rahul are the ones who will be missing the test.

The stalwarts of the Indian test side, Cheteshwar Pujara and Hanuma Vihari, Ishant Sharma retain their positions.

India has been by far the best side, going head to head against New Zealand. Out of the 59 games played between both sides, India leads the scorecard by 21 test wins and  New Zealand have a long way to go ahead with only 12 wins in hand. The other 26 matches ended in a draw.

However, Kane Williamson and his side regained the number one spot for New Zealand in ICC World Test Rankings, they will not be a team to get past without a fight.

India’s only outstanding weakness will be the vulnerability of playing maiden games in Tests and ODIs. India has won very few maiden games in their recent outings and will have to be extra cautious.