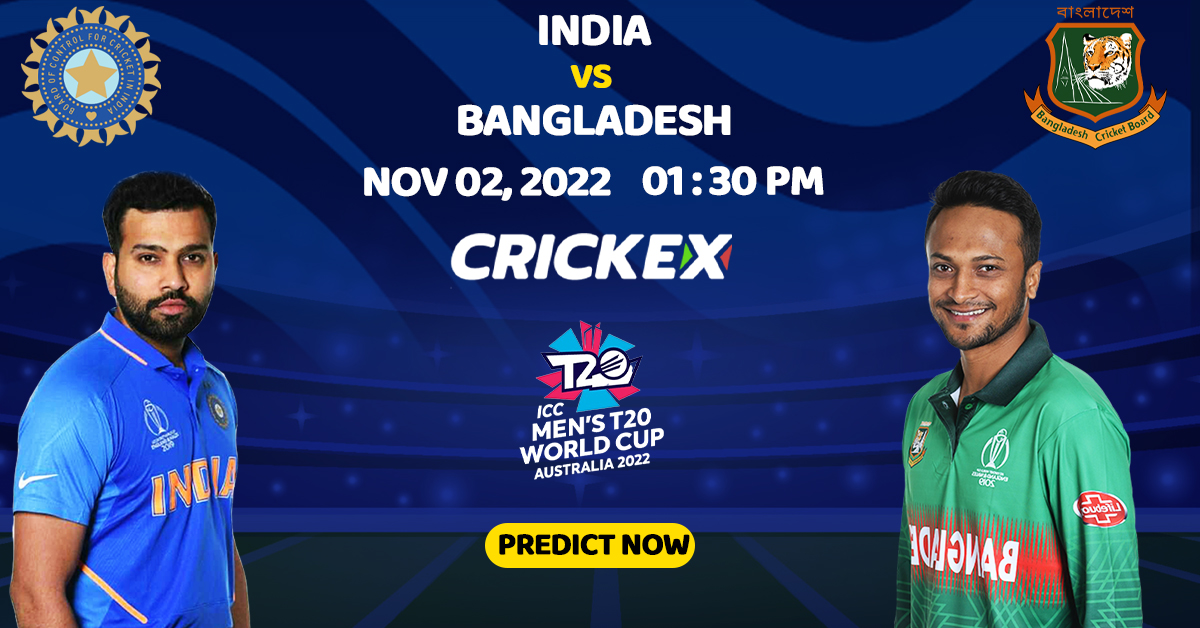 Cricket fans are ready to witness another great T20 World Cup fight. The 35th match of the 2022 T20 World Cup will be played between India and Bangladesh on Wednesday, November 2, 2022, in Adelaide Oval, Adelaide. We are posting a safe, accurate and secure match prediction of the ICC T20 World Cup 2022 today.

India won two games in a row but lost the previous game against South Africa. They had now played three games with two wins to their name. They had lost one match and are second in the Super 12 Group 2 points table. Remember when India lost their group match against South Africa they won the title. Will they repeat this story? time will tell. This match is very important for India.

Bangladesh also did well in the group-stage matches. Bangaldesh had also played three games with two wins to their name. They had lost a game and finished in third place in the points list. They are similar to India in points, but poor in net execution rate. Bangladesh must win this match at all costs to have a chance of reaching the semi-finals.

India is generally a strong and experienced team but they were unable to put in their best performance in the previous match against South Africa and lost the match by a margin of five wickets. India won the toss and decided to bat first. This decision didn’t work for India as they failed to put a good total on the board. They could only score 131 runs from 20 overs. The big names of Team India such as KL Rahul, Rohit Sharma, Virat Kohli, Deepak Hooda and Hardik Pandya failed to score big runs against the South African bowlers.

Suryakumar Yadav was the only successful batsman on his side to score a few runs. He scored 68 runs off 40 balls using six boundaries and three huge sixes. Rohit Sharma scored 15 runs while Virat Kohli could only score 12 runs. No other bowler by his side could even get into the double figure. Deepak Hooda and Mohammad Shami failed to open the bill on the scoreboard.

Bangladesh defeated Zimbabwe in the previous match by a margin of only three runs after an interesting competition. They won the toss and decided to bat first. Their batting order performance was average, as they could only score 150 runs from 20 overs. Najmul Hossain Shanto was the most successful and highest scorer for his side scoring 71 runs off 55 balls. Afif Hossain also performed well, scoring 29 runs. He dealt 19 balls and a huge six. Skipper Shakib Al Hasan scored 23 runs while Litton Das scored 14 runs.

The 35th match of the 2022 T20 World Cup will take place at Adelaide Oval, Adelaide. We had noted in previous games played here that the pitch here at this location is good for hitting. The delivery is dynamic and fast, and scoring runs is not very easy in the early and middle overs. We expect the surface to become slower and a little harder to hit in this game. A score of 170 will be hard to get.

The draw plays a major role in deciding all T20 World Cup matches. Having a good total on the board is always a big advantage in these kinds of big games. According to our draw prediction, the team that wins the draw can choose to play first.

India is full of experienced and young players in the t20 format. This team’s batting order is also strong and some well-known t20-format batsmen are part of this team’s roster, so the chances of winning today’s game for India are increased. The comparison of who will win today’s cricket match prediction and who will win today’s cricket match is given below.