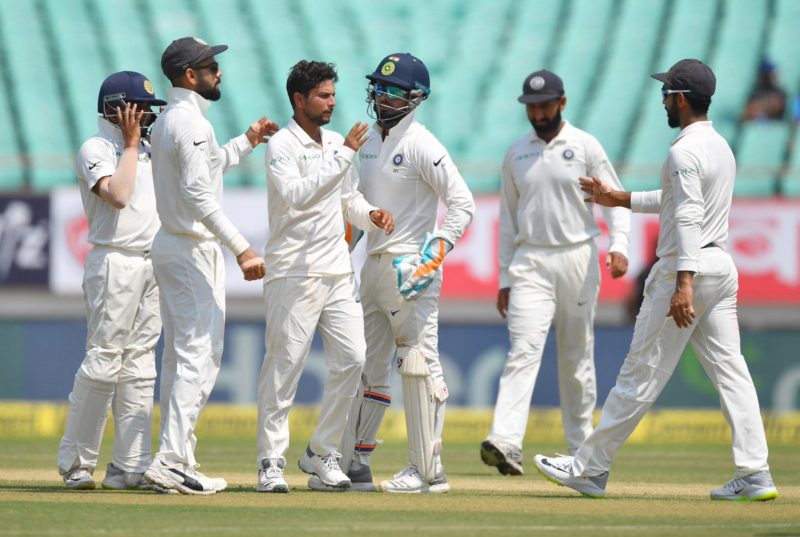 Left-arm wrist-spinner Kuldeep Yadav took 5-57 as the Windies were dismissed for 196 in 50.5 overs, meaning India won by an innings and 272 runs, beating their previous record by 10 runs.

The second and final Test is at Hyderabad from 12-16 October.

India’s previous largest winning margin by an innings was against Test debutants Afghanistan in Bangalore in June, when Ajinkya Rahane’s side won by an innings and 262 runs.

They have won Tests by 10 wickets seven times, while India’s greatest winning margin in terms of runs was against South Africa in Delhi in 2015, when they won by 337 runs.

West Indies resumed on 94-6 after their top order collapsed in the final session on day two, facing a huge first-innings deficit following centuries by Kohli, Prithvi Shaw and Ravindra Jadeja.

Windies captain Kraigg Brathwaite, standing in for the injured Jason Holder, was removed by Ashwin for 10 before lunch, but fellow opener Kieran Powell provided some resistance by hitting 83 from 93 balls, including eight fours and four sixes.

Kuldeep ripped through the tourists’ middle order, trapping Shai Hope lbw before dismissing Shimron Hetymer and Sunil Ambris in the same over.

Chase then chipped Kuldeep straight to Ashwin at extra cover and the wrist-spinner’s fifth wicket came when Powell edged to Shaw at silly point.

Jadeja cleaned up the tail with 3-35, with Shannon Gabriel caught at long-on for the final wicket, as the tourists were bowled out twice in under 100 overs.