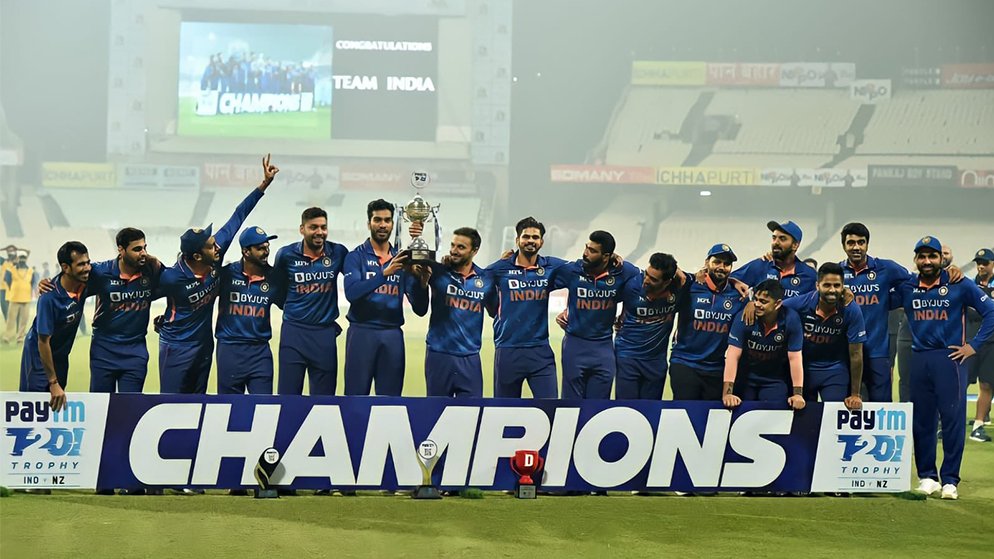 India showed its dominance in the home territory by finishing the 3-match T20 international series without losing a single game. The showdown in Eden Gardens, Kolkata, saw another bossy performance by the Men in Blue. They came to the venue knowing that they had already won the series and were playing for formalities. But the new-look Indian side did not let that go into their head and put on a professional display in front of the adoring Kolkata fans.

Choosing to bat first, the Indians were given a head-start by skipper Rohit, who made batting look easy in front of the cheering Eden spectators. The batsmen put up a high score of 184 with the loss of 7 wickets to set up a target of 185 for the Kiwis. In reply, New Zealand would only notch up 117 runs. They lost all their wickets while chasing.

Bold Choice By Rohit In The Toss

New skipper Rohit Sharma made it a hattrick of toss wins. But this time around he chose to bat first. This was seen as a clear signal to his bowlers and his opponents alike. The Indian captain was throwing a challenge in front of his bowling department, especially his spinners, to take on the dew factor and prove that it can be countered.

Also, going in to bat first was an indication that he was not shying away from experimenting with his tactics. Seeing that India had won the previous two encounters batting second, this was a chance for Rohit to show the world that they have the ammunition to pull off a victory under different circumstances as well.

Indian head coach Rahul Dravid looked visibly satisfied with the outcome of the series during the post-match interview session. He said, “It was a really good series win. Everyone played really well right through the series. It feels good, nice to start well. We are also quite realistic. We have to keep our feet on the ground and be a bit realistic about this win. Not easy for NZ to play a World Cup final and then to turn up three days later and play three games in six days, was never going to be easy for them. It was nice from our perspective but we have to learn from this series and move forward.”

On being asked about his side’s next engagements, Dravid added, “It’s a long journey ahead over the next ten months and we’ll have our share of ups and downs. It’s been really good to see some of the young guys come through. We have given opportunities to some of the boys who haven’t played a lot of cricket over the last few months. We have seen some of the skills available to us and we have to keep building on those skills as we go forward.”

Rohit Sharma Leads From The Front

The Eden Gardens has always witnessed the best of batting maestro Rohit Sharma. He has played some of his scintillating knocks across all formats of the game on this hallowed ground. His 56 off 31 deliveries cemented India’s stand in the game earlier on in the innings. The icing on the cake for him came in the form of the player-of-the-tournament award.

This series would be noteworthy for the introduction of the next generation of Indian T20 specialists. Newcomers Ishan Kishan and Shreyas Iyer played their part perfectly by scoring quickfire twenties. Batters in the lower middle-order- Harshal Patel and Dinesh Chahar, made important contributions with the bat towards the end of the Indian innings.

With the ball, Axar Patel, Harshal Patel and Venkatesh Iyer delivered for their skipper. Together, they took 6 Kiwi wickets to turn the game completely towards India.

Senior Players To Be Back For Test Series

India will be taking on New Zealand in a 2-match test series starting on November 25 in Kanpur, Uttar Pradesh. Virat Kohli and several other senior players like Ravindra Jadeja, Mohammad Shami and Jasprit Bumrah are going to be back for this new adventure.

The morale of the team is high at this moment. So one would expect that the test side would replicate what the T20 brigade has achieved this week. Coach Dravid would be gearing up for the real test against a very good Kiwi test side. The return of regular captain Kane Williamson in New Zealand playing eleven would make the test series a more invigorating one for both the participants.