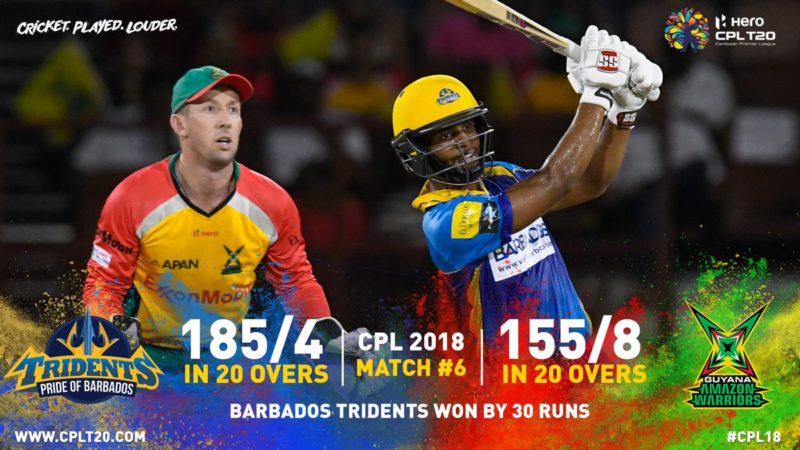 After missing the playoffs in back-to-back seasons, Barbados Tridents got their CPL 2018 campaign off to a winning start by easily defending the highest-ever CPL total made in Guyana Amazon, in a 30-run win over the Amazon Warriors. At a ground where the average first-innings score in the CPL has been 126, Tridents overcame a shaky start of 11 for 2 to post 185 for 4, following a brilliant 88 off 45 balls by Shai Hope, before Raymon Reifer’s five-wicket haul derailed the Amazon Warriors chase.

Tridents’ opening combo of Martin Guptill and Dwayne Smith were both dismissed in the first two overs, and there was little to indicate that a record total was imminent. Rayad Emrit emulated his Trinidad pal Dwayne Bravo’s incredible effort 24 hours earlier, with a one-handed catch to claim Guptill at mid-off. Smith fell at the end of the next over, driving Chris Green’s offspin to extra cover, and Tridents were reduced to 11 for 2 in two overs.

Hope and Steven Smith came together to steer the Tridents back into the match with a 105-run stand for the third wicket. Smith played the classy shots early, including a delightful straight drive off Green for four, to keep the scoreboard moving. However, the partnership could have been halved had Hope been runout on 31, with the score 64 for 2, in the last ball of the ninth over. Smith turned down a run to backward point as Hope hared from the non-striker’s end, but Sherfane Rutherford’s rushed throw missed the stumps after Hope had given up getting back in.

The 24-year-old turned belligerent at the end of the 11th over, heaving Imran Tahir against the turn over long-on and straight down the ground for consecutive sixes. It spurred Smith to come out of his shell at the start of the 12th over, guiding a pair of cuts behind point for four off Keemo Paul, as Tridents produced 20 runs in a four-ball sequence across the two overs. Hope ended the 12th over by gliding two to third man to bring up a 30-ball half-century. He then took Sohail Tanvir apart for two sixes over long-on and a four through extra cover in the 13th over to bring up the 100-run partnership, putting Tridents in a commanding position with seven overs left.

The departure of Smith, who played around a straight ball from Tahir, allowed Hope to take the innings into high gear with Nicholas Pooran. Hope’s six assault continued off Paul in the 18th, driving over the extra cover boundary for the shot of the innings. But he fell two balls later, just 12 short of what would have been his maiden CPL ton.

Pooran took the opportunity to remind everyone of his devastating ball-striking ability by swatting 21 runs off the final over, bowled by Paul, to put the chase out of reach for the host side. He began with a flat six over long-off, before collecting a scampered two. The third ball was smashed magnificently into the second-tier over long-off, and nearly landed on the roof. It took him to 38, six more than his best innings from a lackluster 2017 campaign. A helicopter whip for six over long-on two balls later showed Pooran’s style to match his strength, and he finished unbeaten on 45 off 27 balls.

Despite the fall of Chadwick Walton at the end of the second over, the Warriors had progressed confidently to reach 40 for 1 in the fifth over of the chase, when Reifer started to ruin the host side’s pursuit with his canny left-arm medium pace. Extra bounce resulted in a top-edged pull by Luke Ronchi that landed in Ashley Nurse’s hands at midwicket, before Shimron Hetmyer fell next ball, yanking Reifer to one of the two men out on the boundary during the Powerplay, Guptill covering good ground at deep midwicket to put Reifer on a hat-trick.

Rutherford joined captain Shoaib Malik for an 84-run stand as Warriors kept themselves in the hunt. Legspinner Imran Khan didn’t bowl a single over on the night, with dew making it difficult for spinners to grip the ball. But Tridents captain Jason Holder’s gamble to bring back Nurse to bowl offspin in the 16th over paid off. One ball after Malik smashed him for six over long-on, the Guyana captain misjudged the length while trying to guide Nurse with an open face to third man, and wound up chopping onto his stumps for 38.

As the required run rate continued to climb following Malik’s departure, Reifer exploited the breach with three wickets in the 19th to kill off the chase. With 39 required off the last two overs to win, Green scythed a Reifer full toss behind point for four, but perished off the next ball, with a tame drive to Holder at extra cover. Jason Mohammed sliced Reifer to the cover sweeper two balls later, before a slower bouncer next ball to Rutherford resulted in a gloved catch to Pooran to put Reifer on a hat-trick for the second time in the night. Reifer once again didn’t get the hat-trick, Paul this time punching a full toss down the ground for a single, but the efforts were enough to bag the Man-of-the-Match award.