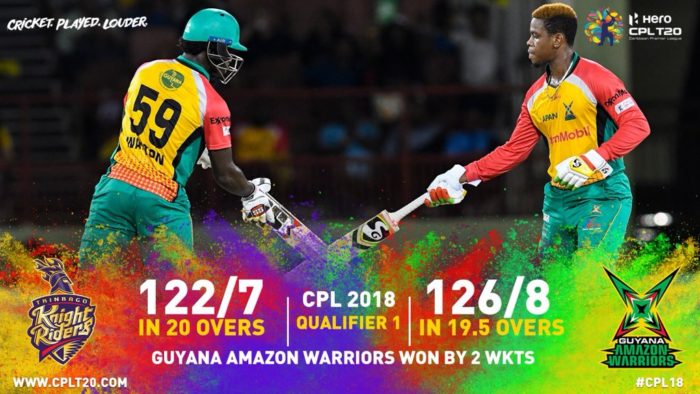 Guyana Amazon Warriors sealed a thrilling two-wicket win over Trinbago Knight Riders in the first Qualifier to seal a place in the final of CPL 2018 on Tuesday (September 11).

Rayad Emrit and Chris Green kept Knight Riders to just 122 for 7 before Shimron Hetmyer and Sherfane Rutherford played a crucial role in the team getting over the line.

In their chase, Warriors got off to a slow start with Cameron Delport and Luke Ronchi struggling to come to terms with the conditions. They were 23 for 2 after the end of the powerplay and with openers dismissed. Hetmyer walked in with the team in trouble and needed support to keep the chase going.

However, Jason Mohammed, Chadwick Walton and Chris Green failed to bat around him as Warriors slipped to 52 for 5. Hetmyer and Rutherford then collaborated to add 50 for the sixth wicket to take the team within touching distance. Both batsmen, however, were dismissed in consecutive balls in the 17th over as Warriors slipped to 102 for 7 with 21 needed off the last three overs.

Romario Shepherd smashed the first ball he faced for a six to leave the equation down to 12 off 12 before Sohail Tanvir kept his calm to guide the team over the line.

Knight Riders will probably rue the poor start they got early on after being sent in. The top three contributed just 8 – all coming from Sunil Narine with Brendon McCullum and Colin Munro registering ducks – as they were left reeling at 26 for 4. Colin Ingram and Darren Bravo steadied the innings but Knight Riders kept gasping for momentum.

Dwayne Bravo scored a run-a-ball 22 towards the end while Kevon Cooper scored 15 off 10 to lift the side over 120. Emrit and Tahir gave away just 44 from their eight overs and shared three wickets between them. The knockout punch, however, was landed by Chris Green who ended with astonishing figures of 4-1-8-2.