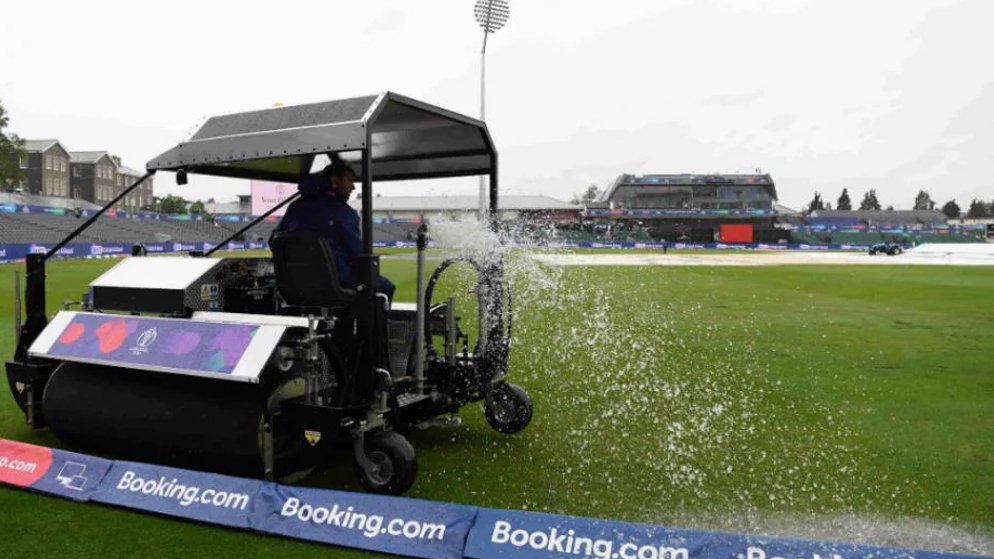 The weather has played spoilsport at multiple sports events over the years. The most recent of them is the much-awaited final of the inaugural edition of the ICC World Test Championship 2021, which is currently being played at the Ageas Bowl in Southampton, England. The two teams that have qualified to the final of the first international test cricket tournament are India and New Zealand.

Fans who have been waiting for this match have been quite disappointed as two days of play has already been washed away by the rains. The match will continue on the reserve day that has been designated by the ICC as the players will otherwise not get enough playing time. This has not been the first time that a final of an ICC tournament has been affected by the weather. There have been various final matches of limited-overs tournaments of the ICC that have been affected by bad weather. Let us have a look at five such memorable instances.

Indian fans still remember this match as it was among the numerous limited-overs that India had won under the captaincy of Mahendra Singh Dhoni. The Champions Trophy of 2013 was held in England and India had qualified to the finals along with the hosts. Shikhar Dhawan and Rohit Sharma, the two opening batsmen, were in fine form throughout the tournament. The match ended up becoming a T20 match thanks to the incessant rains.

Batting first, India managed to put up 129 on a difficult, wet pitch. Despite losing four wickets, England looked poised to take the game away with Ravi Bopara and Eoin Morgan being in fine form. Ishant Sharma came to the rescue finally and dismissed both the players in two consecutive deliveries. India won the title.

This was the third consecutive time that Australia won the tournament. Australia and Sri Lanka faced each other off in the final of this edition of the World Cup which was held in the West Indies. Batting first, Australia put up 281 runs being powered by a brilliant 149 off 104 balls by Adam Gilchrist. Sri Lankan greats Sanath Jayasuriya and Kumar Sangakkara put up half-centuries but otherwise, their performance was quite average. Rain interrupted play multiple times and Australia finally won by Duckworth-Lewis Method.

Bad weather has played spoilsport to other Champions Trophy finals as well. This match was played between West Indies and England, with the former pulling off a surprising and stunning victory. Batting first, England could only put up a total of 217 runs. West Indies, batting second saw wickets falling in quick succession and were reduced to 147-8. Bad light became another obstacle and on the crease were Ian Bradshaw and Courtney Browne. Stunning everyone, the duo put up a 71 run partnership after refusing to abandon play due to bad light. They clinched a victory on the 49th over of the match, much to the happiness of their fans.

This was a match, which despite being interrupted due to rains, really did not stop as both the teams were able to get enough playing time. This edition was co-hosted by South Africa, Zimbabwe and Kenya. Australia and India faced off in the final. Batting first, the Aussies put up a massive total of 359 on the board with Ponting scoring a brilliant unbeaten 140. India’s innings was not as good, with Tendulkar, Ganguly and Kaif unable to put up equally good performances. Play was interrupted due to rains but it resumed again, and India were bowled out on the 40th over after having scored 234 runs. Australia won the World Cup for the second time.

This was yet another final of the ICC Champions Trophy that has been affected by rains. The match was abandoned on the first day and was played again on the reserve day. India and hosts Sri Lanka has faced off in the finals in this edition of the tournament. Sri Lanka batted first and put up 244 on the board. India’s batting was interrupted on the second over by the rains.

The match was abandoned on the first day. The play started afresh on the reserve day and Sri Lanka put up 222 on the board. India put up 38 for one wicket before being interrupted by the rains. The match was abandoned due to bad weather and both the teams were crowned champions of the tournament. Quite a memorable match, one must say as it shows how weather can have the final say in any match.