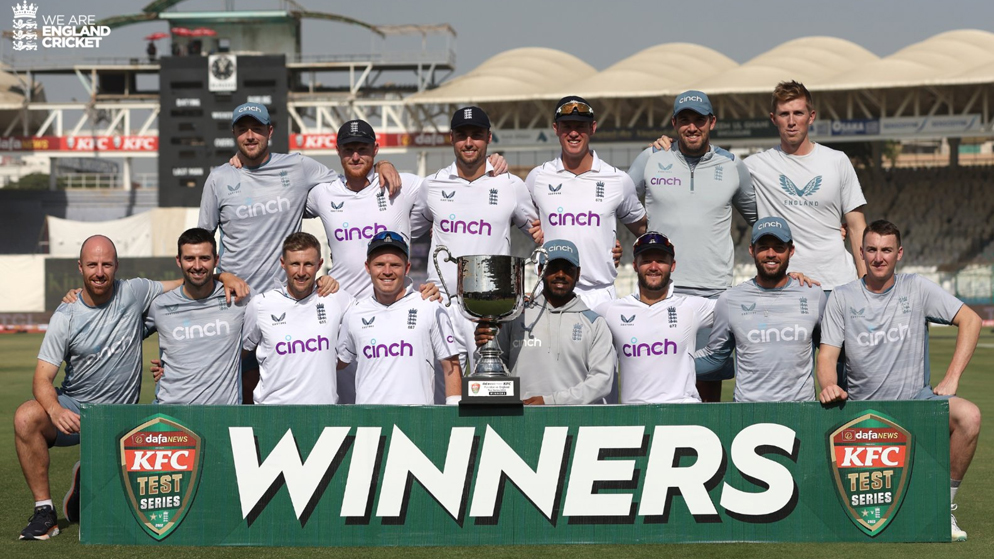 Using just 38 minutes on the fourth day in Karachi to secure an eight-wicket victory, Ben Stokes and Ben Duckett effectively led England to a historic series whitewash in Pakistan.

On Monday night, England had to beat 167 runs to win the third Test. By stumps, they had cut the gap to 55 runs by playing their usual aggressive style of cricket.

Stokes and Duckett got the last runs in just 11.1, making England the first team to win a Test series in Pakistan 3-0.

Duckett finished with an unbeaten score of 82 from 78 balls. His captain helped him out by moving up the order and finishing with 35 not out.

Stokes’ only regret was that he couldn’t hit a six, which would have put him ahead of head coach Brendon McCullum’s record for the most sixes hit in Test cricket.

On the third day in Paris, Rehan Ahmed became the youngest player in the history of men’s Test cricket to take five wickets in an innings on his debut, which brought England closer to winning.

When the teenager came on in the afternoon of day three, he broke a 110-run partnership between Babar Azam and Saud Shakeel at the fourth wicket, giving Pakistan a brief chance to win. This helped turn the game in England’s favor.

Under Stokes and McCullum, England has won six home Test matches. After a successful summer, they followed it up by winning their first tour abroad in a country where it takes time to get results.

People said Australia’s March trip was like a “15-day Test,” with two boring draws on lifeless pitches and a series-deciding win on the last day.

But England has won all three games, and two Tests ended with a day left over.

In February, the team will go on a two-match tour of New Zealand. In June, they will play a single match against Ireland. The Ashes series starts in June and will be the biggest Test of Stokes and McCullum’s leadership.

Moment of the Series:

The Ben Stokes run-out was the best part of the match. Okay, here’s why, before you raise your eyebrows and give me crap: Brook was to blame when Stokes was run out in the first innings of the last Test, but it was how Stokes acted and what he did right away that won many people over. Stokes was upset when his partner ran for the third run and then walked back when he saw trouble at the bowling end, but he didn’t let any of that bother young Harry Brook.

Ben Stokes took a few steps toward the locker room and then turned around to give Brook a thumbs-up and tell him it was okay and to keep up the excellent work. He was also the first person in the locker room to greet Brook after he hit 100, and he was also the first person to stand up and cheer loudly for the big moment. Times like these make us want to watch sports even more.

Now, the trophy is being given to Ben Stokes. He carries it over to the “Winners” sign, where his friends are getting ready for the picture. Rehan Ahmed will hold the trophy, and everyone in the England camp is happy about it.

It was my best tour. No one has ever won a tour 3-0, so it was a great tour. When I got out to Abrar in the second Test, I was angry and wanted to talk to him differently. We were trying to win last night, so we just changed the order and sent the boys out there to have fun.

We have a plan for how we want to play, and the challenge is playing on different fields. We stuck to our program and did a great job adapting with the bat and ball. Everyone delivered. A lot has been said about how we bat, but our bowling also held up. It comes down to what you think. Amazingly, everyone on the team believes in what we are trying to do, and it’s even more amazing to lead the group confidently. Everyone stood up at some point and did something that helped win the game.

Harry Brook has been a joy to watch. He is so calm and sure of himself at such a young age. Rehan Ahmed does what he does because he is confident and confident. He is not yet finished, but this is very exciting for England. That cap presentation will stick with me. That experience in and of itself was unique. His Dad was so happy and proud, and I’m sure his Mom back home would be just as proud. We knew how vital cricket was to Pakistan and how important it was for us to be here. We have the best fans in the world, and it was an excellent experience for the people of Pakistan to come out and cheer for us and greet us as we left every ground.

Babar Azam: Disappointing as a team.

We weren’t good enough to fight back, but England played well and deserves credit. In the first innings, we lost two wickets in a row. We did well at times, but not for long stretches, which hurt us. Our bowlers did a great job of fighting back, but it wasn’t enough. There were many good things about the series; we’ll carry those over to the next one. We’ll also talk about what went wrong and fix it.

Scores for the third Test between Pakistan and England

Pakistan won the coin flip and chose to bat first.