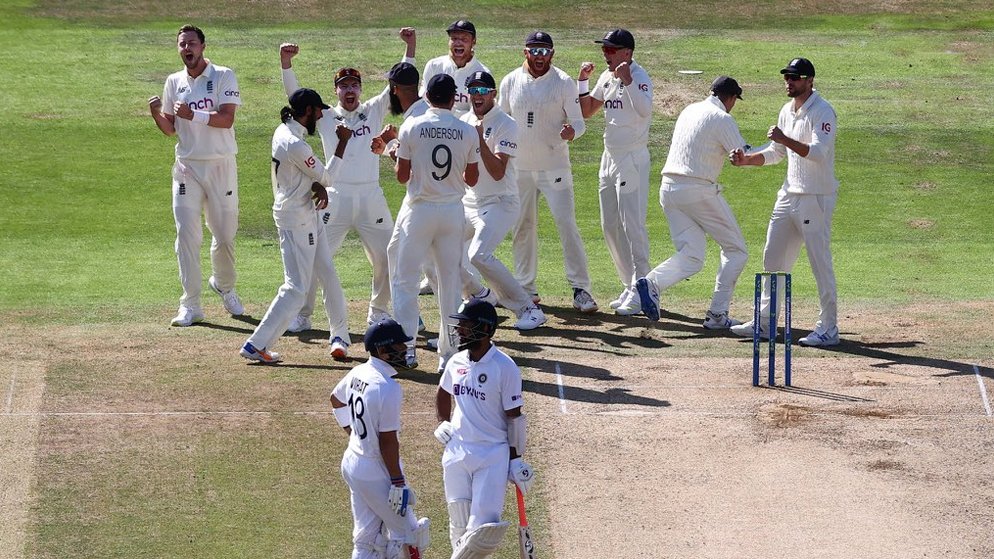 The third match of the Pataudi Trophy that is currently being played between India and England ended yesterday, on the 28th of August, 2021. The play ended on the fourth day of the match, and England won the match by an innings and 76 runs and levelled the series 1-1. India and England share one of the healthiest rivalries in the history of world cricket. In fact, England was the first team that India had played against. India seemed better placed to combat England on the latter’s home soil.

The first test match was drawn although India seemed better poised to win, and the second test match was won by the visitors. India was unable to offer any meaningful competition to the hosts in the third match, who towered over them in both batting and bowling. Let us have a look at the further details of this win.

The series has been quite a promising one for India. Despite its consistent performances in world cricket, India is often criticized for not being able to adapt to the conditions on foreign soil. However, things have slowly been changing. The series win in Australia and then the subsequent series triumph against England at home has greatly boosted the confidence of the Indian players. The defeat in the final of the inaugural edition of the World Test Championship was certainly a dampener, but the team has bounced back in the series against England.

India won the toss and chose to bat first. However, the Indian batsmen were all at sea against the English bowlers. India lost its very first wicket after having scored one run as Rahul was caught behind the stumps on Anderson’s bowling. None of the batsmen were able to put up a staunch resistance against the English bowlers. The highest scorer among the Indian batsmen was Rohit Sharma, who scored 19 off 105 balls. Ajinkya Rahane comes next, having scored 18 off 54 balls. Virat Kohli scored 7 while Pant scored 2. The other players, too, scored runs in a single digit. Anderson picked up 3 wickets for 6 runs and Craig Overton picked up 3 wickets for 14 runs.

The Indian innings was limited to 76 runs. In response, England put up a brilliant batting show. The openers Rory Burns and Haseeb Hamid both scored half-centuries as did Dawid Malan, who was playing in the number three spot. Joe Root hit yet another beautiful century by scoring 121 off 165 balls. England put up a total of 432 runs. In response, India tried putting up a much better show in the third innings. Rohit Sharma (59), Cheteshwar Pujara (91) and Virat Kohli (55) scored half-centuries each to fight back against England. India was particularly good on the third day of play, when it was able to reduce the deficit from 354 to 139 and India was at 215/2.

However, things went rapidly downhill on the fourth day of play. India lost 8 wickets in 63 runs; a batting collapse that began with Pujara’s departure at 91; when he was only nine runs short of a century that had long eluded him. The middle-order collapsed, and only Ravindra Jadeja scored 30 off 25 balls. The English fast bowlers bowled very well. Craig Overton bagged 3 wickets for 47 while Ollie Robinson picked up a five-for for 65 runs. Kohli was not very happy with the performance of his team.

In the post-match conference, he said, “We put up crucial partnerships and saw the day through; but the pressure from the English bowlers was brilliant this morning and we didn’t respond well. Batting collapses can happen in this country; the pitch was good to bat on, but their discipline with the ball forced us to make a few mistakes, and it was difficult to deal with spells where we weren’t getting runs. We didn’t make good decisions as a batting side.” He also added; “We don’t have much other than the batting in the second innings to take from this game in terms of positives. Playing another spinner would depend on the pitch and we’ll take a call later. It depends on the moisture and how it will hold up for the five days.”

The next match will certainly see tougher competition between the two teams as India will try to bounce back and England will seek to extend its winning streak.