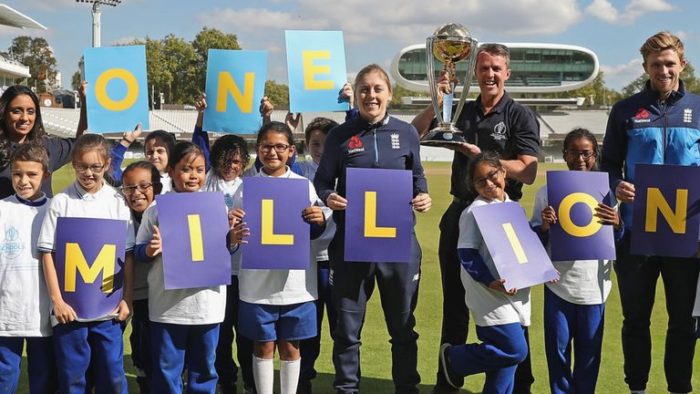 The England and Wales Cricket Board (ECB) and International Cricket Council (ICC) have announced their strategic plan to use the Cricket World Cup 2019 to boost cricket participation and help drive the long-term growth of the game in England and Wales.

It will use the iconic global sporting event – the biggest prize in world cricket – to inspire and engage 1m young people, aged between five and 12, in the next year.

A core pillar of this plan is the Cricket World Cup Schools Programme, which launched on Tuesday, and will aim to engage over 700,000 school children across England and Wales in conjunction with Chance to Shine.

Together, they took part in a classroom session, using cricket as an educational tool; one key element of the World Cup Schools Programme where teachers can sign up to an online portal full lesson ideas that take cricket into the classroom.

Steve Elworthy, managing director of ICC Cricket World Cup 2019, said: “The ICC Cricket World Cup arrives back to England and Wales for the first time in 20 years and now is the time to seize this priceless opportunity and use the tournament as a platform for growth to create a new generation of fans and players.

“Through our dedicated Schools Programme, we are excited to take cricket into the classrooms across England and Wales as well as giving young people the unique chance to be part of sporting history. I know how important education through sport can be and we want to encourage as many schools as possible to be part of the programme and provide this unique opportunity to their pupils.”

Tracey Crouch MP, Minister for Sport and Civil Society, said: “Cricket World Cup 2019 will be the biggest cricket tournament to date; showcasing the best of England and Wales on the global stage.

“By attracting thousands of visitors to our shores and inspiring the next generation of cricket superstars to pick up a bat and ball, I am confident we will have a cricket legacy for the nation to be proud of.”

The strategy builds on the wider ECB framework of Cricket Unleashed and supporting the South Asian Action Plan launched earlier this year, the strategy has four key aims to drive growth throughout the game: