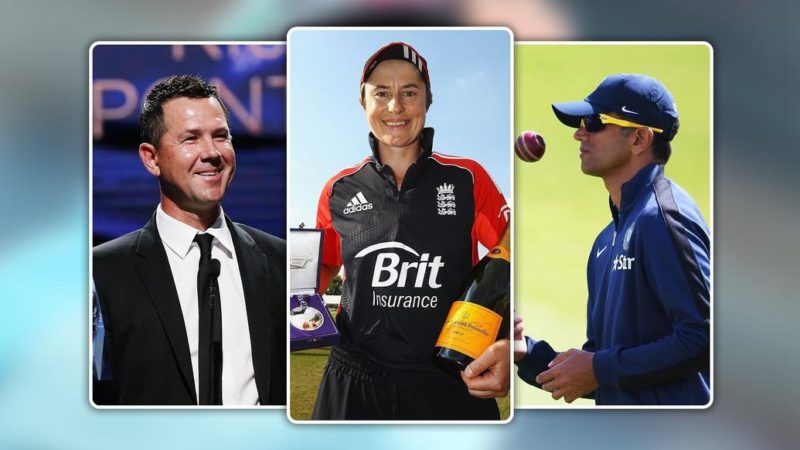 Dravid, on Sunday (July 1), became the fifth Indian after Bishan Singh Bedi, Kapil Dev, Sunil Gavaskar and Anil Kumble to make it to the illustrious list of cricketers.

With 13,288 runs in 164 Test matches, Dravid occupies the fourth spot on the list of highest run-getters in the five-day format while he’s placed ninth on the overall run-scorers chart in ODIs with 10,889 runs in 344 games. Dravid also plucked the most catches (210) by a non-wicketkeeper in the traditional format. He was named the ICC Cricketer of the Year in 2004 alongside being named the best Test cricketer for the same year.

The India cricketer made his first class debut way back in February 1991 for Karnataka against Maharashtra, compiling 82 in the first innings. During the 1991-92 first class season, he showed enough promise by amassing 434 runs at an average of 48.22.

Dravid pushed himself into the national reckoning by accruing 968 runs at 80.66 in the 1995-96 first class season. He soon made his ODI debut against Sri Lanka in Singapore, in April 1996. He also played his maiden Test that year versus England at Lord’s. In the three-match Test rubber versus England, he shone brightly with scores of 95 and 84. Dravid essayed his first Test century against South Africa at the Wanderers in 1997.

The defining moment of his career probably came in the 2001 Test series against Australia at Eden Gardens, when he and VVS Laxman scripted a stunning turnaround with a stand of 376 as India came from behind to register a memorable 171-run win. He also played vital hands in the Leeds Test in 2002, Adelaide in 2003-04, Rawalpindi in 2004, Jamaica in 2006 and at The Oval in 2011. Dravid also led India to Test series wins in the West Indies in 2006 and England in 2007. He retired from international cricket in March 2012.

In a video message, Dravid said: “It’s a great honour and privilege to be inducted into the Hall of Fame. I’m thankful to the ICC for giving me this honour. It’s a privilege to be in a group of people I have looked up to and I have admired as a young man growing up in my journey as a cricketer. I love to be able to thank so many people who have made it possible for me to have a career in this sport and to fulfil my dreams.

“My parents, my young family, my wife and two kids, my so many friends, colleagues that I have played with and played against who have enriched my game, my many coaches right from the time I was a boy in school and the coaches that I have played for India have really helped me develop my potential. I would not be here if not for the support and love that they have given me and I’m truly thankful and grateful for it.”

Dravid, who’s currently in England as coach of the India A team, wasn’t there in person when his inclusion in the Hall of Fame was announced by the ICC. “Unfortunately, I’m not there to receive this honour because of my commitments with India A and the coaching duties that I have. But once again, I’m really grateful, I’m humbled to be able to receive this honour. It’s a privilege and something that I’ll hold very dear to my heart,” he said.

Ponting, who retired from international cricket at the end of the Test series against South Africa in the 2012-13 home season, finished his career with 13,378 runs and 41 centuries in the longest format of the game. He also compiled 13,704 runs and 30 hundreds in ODIs.

He was named the ICC Cricketer of the year for 2006 as well as 2007. In addition to it, Ponting was a part of the Australian set-up that reached four World Cup finals, with the side emerging triumphant in 1999, 2003 and 2007. He also led Australia to a record 26 consecutive unbeaten World Cup matches from 2003 to 2011 and captained the side to victory in the ICC Champions Trophy in 2006 and 2009.

Ponting first came into the reckoning in the 1994-95 Sheffield Shield season when he notched up 681 runs at an average of over 75 for Tasmania. He subsequently made his ODI debut in the Quadrangular series in New Zealand. He was also selected for the four-match Test series in the Caribbean in 1995, but didn’t play in any of the matches. He eventually made his Test debut, against Sri Lanka in Perth, at the end of that year, compiling a fine 96 before being wrongly adjudged LBW by Khizer Hayat.

He had to wait for almost two more years to compile his maiden Test century, which came against England at Leeds in 1997. He accumulated his first ODI hundred against Sri Lanka at the MCG in 1996. The highlight of Ponting’s career perhaps came in the 2003 World Cup when he crunched a splendid, unbeaten 140 in the final versus India at the Wanderers, as Australia crushed the Asian country by 125 runs. In 2006, he was in stellar form, evidenced by the 1333 runs he aggregated at an average of 88.86 in Tests.

“I feel deeply honoured to be recognised by the ICC in this way. I loved every moment of my journey as a player and am so very proud of the team and personal achievements along the way.

“These would not have been possible without the help of so many people including my teammates, coaches and support staff that played such an integral part in my playing career. I would like to especially thank my family for their constant support and direction. Honours like this are just as much for them as it is for me,” Ponting said.

Taylor made her ODI debut, versus Australia in 1998. She donned her maiden Test cap, against India in Shenley in 1999. The highlight of her career perhaps was the unbeaten 156 in the ODI against India at Lord’s in 2006. She accumulated almost 62% of the runs England aggregated that day. Her highest individual Test score of 177 came against South Africa in 2003. She called time on her career in July 2011.

Taylor also represented England at Under 17 and Under 19 levels in hockey. She was also honoured with an MBE for her achievements in cricket in February 2010.

“It’s a great honour to be inducted into the ICC Hall of Fame alongside some of the greatest names of the men’s and women’s game from across the world and throughout the generations, players who I looked up to during my playing career and hold in great esteem.

“I would like to thank everyone who helped me achieve my dreams of success with England, particularly my parents for their support from my early days in the game, Mark Lane for his coaching wisdom, the ECB for their support of the national team, my team-mates and support staff and my colleagues at SUMS Consulting, for their flexibility and confidence that I could deliver success both on and off the field over the last five years of my international cricket career,” she said.

ICC started the honours nine years ago in association with Federation of International Cricketers’ Association. Initially, there were 55 inductees.